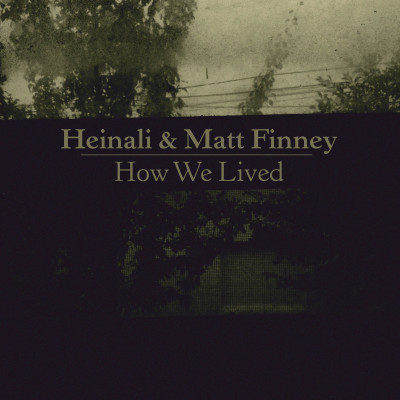 How We Lived by Heinali and Matt Finney

Everyone loves a good comeback story. There’s nothing more heartwarming than seeing our hero/heroine clawing their way out of the dark, staring down their demons and taking that one last swing at redemption. It’s been 6 years since the last release from Heinali and Matt Finney, though their follow up to 2011’s stunning Ain’t No Night should have come a lot sooner: the now defunct Handmade Birds were all set to release their planned LP On Mercy Shores in 2012 before unceremoniously pulling the plug before it was finished. Disillusioned, Finney retreated from music – and as the track ‘Wilderness’ here details, things only got worse. “You’re bitter. You walk away. You lose your hair. Lose a child. Your dad dies.” If this were a movie script ‘Wilderness’ would be Finney’s ‘darkest before the dawn’ moment. And How We Lived would be the heroic return from the brink.

Of course this is real life and not some Hollywood biopic. People don’t live in neat character arcs. Finney’s tale may have the elements of a good comeback story but he’s an unsentimental writer who refuses to gloss over life’s messier details. So an uplifting yarn was never really on the cards – in fact How We Lived may well be the toughest listen their collaboration has spawned to date. During those missing years his co-conspirator, the prodigiously prolific Heinali (aka Ukranian multi-instrumentalist Oleg Shpudeiko) moved on from the towering, dizzy guitars that were the trademark of their self-claimed ‘doomgaze’ sound and ventured into ambient/drone territory. How We Lived actually sounds closer to Familial Rot, last year’s collaboration between Finney and Iranian ambient artist Siavash Amini, than it does their earlier work.

Which suits the subject matter perfectly. How We Lived is a dissonant collage of anxious droning and muddy, broken guitar. ‘Relationship Goals’ coasts on a twinkling, glimmering drone that sounds like it’s auditioning for the ‘something-terrible-yet-wondrous-is-happening’ music on Stranger Things, anchored by a bass that rings out out like the hourly strikes of a clock tower bell. It’s a beginning full of promise and foreboding, which mirrors the monologue Finney delivers at the end of the track, describing an argument which sounds like a miserable ending to a relationship and a potential fresh start. “You were talking and I thought about was how much I hated you. How much I hated myself…We got back in the car and the whole ride home was silent apart from the sound of you crying. It felt good to finally start breathing again.” It’s delivered in his trademark half-whispered drawl, sounding like a late night confession into a Dictaphone or a police tape recorder, so nonchalantly brutal you worry about what he’s going to do when he’s done talking.

Another unflinching confessional begins ‘Wilderness’, detailing those AWOL years while ominous synths oscillate between headphones and a hum begins to rise from the bowels of the earth. “Maybe you stumble out of the woods 4 years later thinking you still have something to say. But all you do is go from desperate moment to desperate moment.” Bass notes hit like slow motion car wrecks. A riff of sorts appears, crunching but meandering, the closest they come to reviving their old guitar heavy days, starting like a broken Nine Inch Nails track before subsiding into those lost, haunted drones. It’s an album full of such ill-at-ease touches: halfway through ‘October Light’ a sudden rush of distant drums appears, a burst of frantic energy that sounds as if it’s coming from another room. It sounds (and somehow feels) like trying to fall asleep when your neighbours are having a raucous house party you weren’t invited to. Like being too tired to sleep, when all the light seems to have been sapped from your being and yet you still find yourself awake.

Which is not a fun sensation, and this is far from an easy listen. But what it is is unflinchingly, corrosively sincere. ‘Perfect Blue’ is the sound of head static, of unrelenting, screeching brain traffic, like when you press down on the screen of an old solar powered calculator and every symbol appears at once. No clarity. Then the rain comes. Finney describes a dream set in a kitchen bathed in impossible blue light. Who is it he’s describing drinking coffee, the person he listens to until he’s pulled away? He doesn’t tell us. It feels like a Cormac McCarthy kind of ending, but whereas McCarthy would at least give us a long, opaque soliloquy to chew over we aren’t clued in as to what is said or what it meant. If it meant anything. Most times a dream is just a dream. Maybe that’s the point. This isn’t a heartwarming comeback story; it wouldn’t fit for Heinali and Matt Finney’s MO to start pulling punches now. But as a document of the darkest period in their shared history it’s a fittingly discomforting work of troubled noise and desperate drones, the kind that grab you in their uneasy embrace and leave you exhausted, queasy and raw.