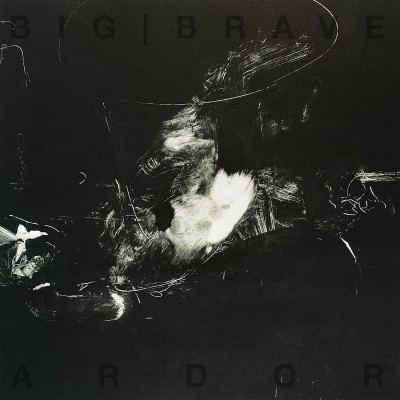 It’s hard to think of a music video that captures a band’s modus operandi better than the one Big|Brave guitarist Mathieu Ball made for Ardor’s opening track ‘Sound,’ in which vocalist/guitarist Robin Wattie simply sings into a camera against a white background. This one shot is held for the tracks entire 12 minutes. The trick comes in the way multiple takes of her performance are layered over each other, creating several ghostly images of Wattie shifting around, occasionally coalescing into one solid face for a brief moment before again dissipating into multitudes. There’s nothing flashy about any of the performances, they all occupy roughly the same space for the most part. But there’s an eerie quality to it, so brazen and straightforward, yet elusive and unknowable.

Which is a better metaphor for their music than anything I can come up with. It’s straightforward on paper – Ball and Wattie’s guitar riffs aren’t the kind you’ll see tabbed in guitar magazines – if they can be called riffs at all, made up as they are for the most part of single chords being hammered and left to ring out. But the magic comes from incidental noise that come between the chords, in the sustain and the feedback. The living sound, the ghosts in the machine. Along with Louis-Alexandre Beauregard’s similarly austere pummelings on the drum kit they create an environment for the unplanned to occur, in the vibrations of the distortion and the spontaneous bursts of feedback. Those moments of clarity in the video where the many faces of Wattie appear as one isn’t the work of choreography, just moments where she happened to occupy the same space in the various takes. Likewise their sound is often not so much composition as it is incantation; beckoning forth spirits for Wattie to quell with her ever arresting vocals. Their closest sonic kin are most likely Swans, who’ve mastered the art of similar slow ritualistic epics, but while they share a certain amount of DNA they’re very different beasts.

Listening back to 2014 debut Feral Verdure it’s impressive how fully formed Big|Brave arrived. Like Au De La before it there are no seismic shifts on Ardor, just another steady refinement of the formula they began with. The biggest change is in song lengths – whilst Au De La boasted 3 tracks circa 10 minutes Ardor is made up of 3 tracks in total, clocking in at just shy of 40 minutes. It’s emblematic of the growing confidence in their craft that makes Ardor their most assured work yet.

On ‘Borer’ they let silences stretch out between chords to an an almost uncomfortable duration, moments of near silence as reverb dwindles and dies, waves of noise crashing and receding. As on Au De La Jessica Moss (Silver Mt Zion) contributes violin and adds an extra layer late in the track that makes them sound like Dirty Three after a lengthy Sleep binge. Eventually it boils itself down to single, sustained notes and ghostly drones. “I am immune/and I am protected,” Wattie repeats, rolling the words around in her mouth, changing the pitch and intonation as if weighing them, twisting them to examine them from every angle, in a manner reminiscent of Sue Tompkins of Life Without Buildings.

As she cuts loose with screams here it’s one of the few moments of pure catharsis that she indulged so readily in earlier works, like in the cacophonous, bloodshot screams of ‘And As the Waters Go’ (Au De La). She’s often compared to Bjork and they do share those strange, vicious lilts at the end of lines, as well as the sense when they sound at their most fragile they’re still in control, and at their most imposing they’re still vulnerable. On, ‘Lull’ possibly the slowest burning song they’ve recorded to date, she’s accompanied by a single bass note reverberating and humming feedback drifting by. But for the slow, steady beat it could be filed under drone/ambient. Moss’ elegiac strings complement the understated din, and then the song deconstructs itself and returns bigger and more abrasive, the strings turning vengeful as a solo of sorts constructed from shattered guitar scrapes into view. All the while Watties wounded, wounding vocals sound like the most broken thing on the track and the most indestructible force in their arsenal. It’s a perfect duality few vocalists achieve.

And as a whole it’s not far from the sound they’ve always had, just that little bit clearer and more surefooted. Their vision is coming into focus. As they continue their bloody minded path, distilling a singular sound down to it’s purest essence, with minimalist arrangements and maximalist volume, they’re gathering a devoted following with each step. And with their patience and persistence it’s likely only a matter of time before the rest of the leftfield looking world sits up and takes notice.