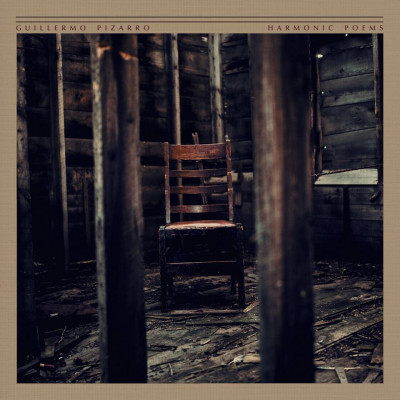 Guillermo Pizarro’s Harmonic Poems was released on August 21st through his own independent label Flag Day Recordings (flagdayrecordings.bandcamp.com/releases). Harmonic Poems was recorded, mixed, and mastered by Kenny Eaton (Time Columns) at Mystery Ton Studios in Monrovia, Maryland (www.mysterytonstudios.com). This is the really neat thing about Pizarro is that he records in an actual studio for his releases, something a lot of experimental/noise musicians don’t do that often. Yes, there are some experimental/noise artists that record in studios outside of their homes, but with local growing artists it is not done that often. Pizarro wants his elements to stick out, which I will say it would have been pretty complicated to record Harmonic Poems in a bedroom studio. It may have been possible, but the album would not have lived up to its full potential. The diverse range of sound that you receive from an actual studio is something you won’t get from a home studio setting.

Pizarro experiments with field recordings, electronics and amplified objects to create his soundscapes. A lot of the sounds you will hear on Harmonic Poems are homemade devices or devices that you wouldn’t think would be used on an album. This is the beauty about Pizarro’s work. He is a master of his craft and doesn’t shy away from trying unconventional ways of creating noise. Take for instance the Aztec death whistle, which Pizarro uses in the track ‘Aokigahara Pt. II’. The death whistle is a native whistle of the Aztecs that looks like a skull and producing a chilling noise that sounds like a tortured scream. However, when Pizarro told me about his homemade device, the makeshift lung, I was blown away. It is a homemade lung that he made out of various materials to simulate the sound of a fluid filled lung. This can be heard at about the 5:30 mark of the final track ’13 Years – Deep Creek Blues’. I won’t go into much more detail about Pizarro’s ways of getting his sounds, because he is truly innovative and unique at creating this style of music. Some may call it noise, some may call it experimental, and that is if you had to put a genre on it. I refer to his sounds as a true work of art.

Tracks like ‘My Guest’ with it’s static like signal effects, to ‘A Room With A View’, with some of the sound effects coming from an early 1900’s rocking chair to Pizarro using voice manipulation to give off a haunting vibe while reciting his poetry. Just as a start the beginning lines of his poem in ‘A Room With A View’ are “I’ve been watching you. Mouth wide and grotesque. No words. A harmonic poem”. As haunting as this may sound, Harmonic Poems is really about depression and anxiety, and although a lot of the poetry is haunting, the limited edition version of this album comes with frankincense incense sticks, which Pizarro explained are given with the limited version to be used as a cleansing tool.

Harmonic Poems, without a doubt, is a creepy album. But in between all of the harsh, yet innovative, noise and creepy textures, there is a sense of calm. Especially the ending of the final track ’13 Years – Deep Creek Blues’ where all of the noise subsides and we are left with the sound of a flowing creek. The album starts off harsh and ends peacefully. As I said earlier, this is a true work of art. Harmonic Poems is very similar to a story or a film. I would highly suggest putting on your headphones, cutting out all of the lights, and listening to this album from start to finish. If you follow these instructions, you are in for one hell of a ride.