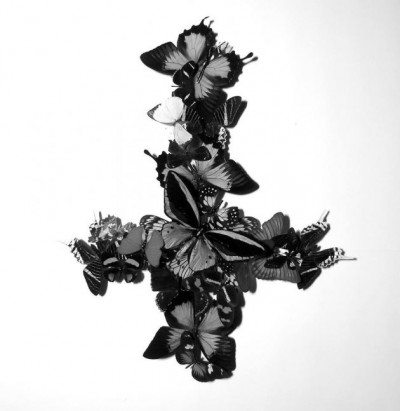 If you’re kind of person who sneers at received wisdom and goes about judging books by their covers then you’d likely get the wrong idea about Monarch!. From their album/song titles alone – like ‘Sabbat Noir’ (you don’t need to be fluent in French to translate that), ‘Sabbracadaver’ and ‘Amplifier Death March’ – you’d likely assume they’re all about doom for doom’s sake, peddling the usual Sabbath worshipping tropes and pushing volume over inspiration. And the band themselves do little to dispel that notion; guitarist Shiran Kaïdine once described the band’s mission statement as: “to play slow and loud as fuck.” But should you crack the book open you’ll find there’s been a more interesting story unfolding on the pages beneath that cover. And there’s never been more to the story than on Never Forever, their 7th album.

Like its predecessors it walks the line where doom drifts into drone, with songs stretched out over lengths well into double digits. Think along the lines of Khanate: hulking doom so slow it’s soporific, cataclysmic guitar assault can only barely be referred to as ‘riffs’. Listening to Monarch! is a sensation not unlike watching a 2 ton black treacle spillage gloop its way down a hill towards an unsuspecting orphanage. What separates Never Forever from their earlier work is the foregrounding of vocalist Emilie Bresson’s range beyond her usual imposing guttural roars. She’s always been an impressive presence on Monarch! records, but on previous outings her more melodic tones have been used sparingly, as moody decoration, whereas now she’s the true focal point of their sound. On opener ’Of Night, with Knives’ alone she goes from whispers to ominous chanting, from eerie looped la-la-las to reverb drenched ethereal cooing and from primal grunting to the kinds of screams that could chill the bones of the dead. And that’s just in the first 6 minutes. It adds a sinister air to the traditional gloomy aura the band resonates, with usual slow motion thunderclaps of guitar and drums leaving plenty of room for the fuzz and the hum of the amps to reverberate and dwindle. And they’re in as fine a form as ever; there are funereal guitar melodies 13 minutes in that slump and trudge like they’ve just been told the local kitten sanctuary has burned down.

The positioning of ‘Song to the Void’ as track 2 is a curious one as it sounds like a natural scene setter – indeed its sound tracked an album teaser, which unlike most such promos was somehow a) not terrible/pointless and b) actually tees up the album nicely – being as it is full of portent and ill omens, with an incessant 4/4 pounding bass drum and rising guitar static pushing the tension upwards. “No one can run when the stars are falling” Bresson sighs in a manner that suggests she’s the one who caused them to fall. If it’s not their set opener on their next tour they’re missing a trick. But here the track merely ushers in a second mammoth length track in ‘Cadaverine’, a beautiful juxtaposition of the sublime and the grotesque, with some exquisite droning riffs and feedback that make an oddly fitting home for Bresson’s softer cadences. Though if you think her lighter vocals are a sweetener to the pill she soon corrects that mistake for you with screams that sound like she’s attempting to throw up her own soul. It only gets darker with atonal violin abuse fighting with feedback squeals topping off a dissonant, unsettling section of the record.

Which may sound like tough going. And indeed in typical form it’s a gruelling record, with 3 tracks exceeding the 15 minute mark. But while it may all be doom it’s not all gloom; ‘Diamant Noir’ shows a lighter side to the band. The title of course translates to ‘Black Diamond’. Yes, as in the KISS song. Not that you’d really notice without being told – stretched out over 9 minutes and given the usual Monarch! heft it’s a much more miserable and broken experience than the original. And of course it is – as odd as it sounds as is a straight cover would sound utterly bizarre here. Bresson sings it fairly faithfully, albeit strung out to hell, with enough overdubs to sound like a choir, and somehow their slow motion version of the solo is weirdly majestic. It doesn’t entirely sound like it fits in with the rest of the record but it’s enjoyable nonetheless.

‘Lillith’ is closer to business as usual, sounding like the soundtrack to some Giallo film with its horror style organ, before the familiar gutpunch bass comes in. It comes on like some grim ceremony, appeasing gods so dark their names must go unspoken. There are long periods of blank humming, where dooms usual riff-and-destroy formula is dissolved into a sea of murky noise. Such is the way of Monarch!, one of the doom landscapes most gnarled and wizened features. Never Forever