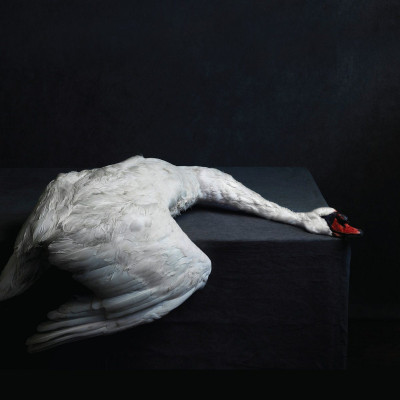 I’ll get right down to it and begin at the end: this is both my album of the year and the deepest, finest record Belgium’s apocalyptic and meditative Amenra have yet produced. Painfully intimate, achingly beautiful and excoriatingly heavy, Mass VI is a complete masterpiece.

Those already familiar with Amenra don’t need to hear the usual bullshit about how long they’ve been around and what impact they’ve made on the scene, you already know with what altitude they tower over the majority of their peers. For those who are new to the band: if you have any interest at all in the arts of the brutal and the beautiful, in the endless expanses of potential provided by huge dynamic range and in poetic yet molten emotion, you may want to go back and absorb their complete body of work, and even then there is simply no way you’ll be prepared to breach the majesty of Mass VI.

Singer Colin H. Van Eeckhout describes the record as ‘music whose creation was fuelled by pure necessity’ and indeed it’s hard to imagine how they could have contained such feelings, as the album equates to a coronal mass-ejection of intensity. Opening track ‘Children of the Eye’ begins with a slow but escalating chromatic drone loaded with intent. Something approaching ominously, some behemoth slouching towards Bethlehem to be born. Then things really kick off and the band envelop the listener in a sustained campaign of visceral metal, the central riff eating its own tail again and again relentlessly, lulling to delicate melody’s brief respite before tumbling back inevitably into its own crushing vortex.

The four main long songs that form the album are interspersed by confessional and sombre spoken word pieces in English, Flemish and French. These serve to pull you into the most intimate of embraces, before the colossal shock-waves return to smite and drown you once again.

I could spend hours droning on about each individual track, but it’s ‘A Solitary Reign’ I’d like to focus on as here Amenra reach their apotheosis. The song begins with both a plaintive, hollow guitar phrase and fragile, gorgeous singing that proceed to intercourse with, and writhe within, the detonation of heavy riffs that follow.  Ever protean and escalating it flows and climbs, pushing you up and up until the glass ceiling breaks and the vault of the heavens is laid bare to your outstretched arms. When the peak is reached and the guttural shrieks provide fundament to the transcendent, soaring vocals it’s as though the angel and the devil sing duet on either side of the membrane that separates joy from pain. It’s utterly sublime and, though I’ve done my best, there simply are no words for such intense and ambiguous exhilaration.

‘A Solitary Reign’ speaks to me of existential courage, the majesty of accepting our condition, our hermetic incarnation; touching only through the fingertips of art, but the current of that touch electrifying our deepest reservoirs of feeling, lighting us up inside like a fleet of time-lapsed storm clouds. This is cohesive mythologising at its finest: embracing fire and stealing light from the mouth of darkness. The nobility of facing fate, of singing fate’s song, unbowed, unbent and unbroken.

‘Fate strikes and strokes. Where there is love there is pain.’ – Colin H. Van Eeckhout.

Personal tragedy informs the production of this record, and necessitates the alchemy of its art: the closest we can get to making salvation out of pain. To expel demons, you must first summon them into the circle, to channel rage into catharsis you must first tap into its flow, to become complete you must accept your shadow. These are things that Amenra know only too well. On Mass VI they bear the torch to lead you through this dark valley of the soul. Follow them, before the silver light on the horizon melts away and all lineaments of silhouette have blended into the void.