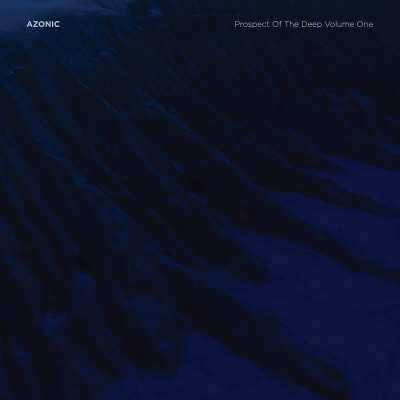 Prospect Of The Deep Volume One by Azonic

The number 23 is often said to have strange properties, first ascribed to it by Beat-era icon and Industrial saint William S. Burroughs and later perpetuated by infamous ‘Agnostic Mystic’ Robert Anton Wilson, the prolific and highly-regarded writer and journalist Arthur Koestler and former Throbbing Gristle figurehead Genesis P Orridge. It is said that once a person notices the number ’23’ in involvement with a situation, once that situation is investigated in detail it becomes likely that the number will reoccur across the course of the investigation, particularly when not specifically looked-for.

I mention this by way of a preamble as it has been 23 years since Andy Hawkins, the main man behind Azonic, released Halo, in 1994, the first and, up until this point, only recording under the Azonic name, bar a collaborative recording between Azonic and Godflesh guitarist Justin Broadrick entitled Skinner’s Black Laboratories released a year later in 1995.

Interestingly, well, to me, anyway, Hawkins’ other, main, musical concern, avant rock and dub trio Blind Idiot God, also left a 23 year gap between their 1992 album Cyclotron and their ‘comeback’ recording, 2015’s critically acclaimed Before Ever After… coincidence? You tell me.

Following a substantial suspension in output it would be a safe bet that a player as inventive and free as Hawkins wouldn’t exactly have spent all of those years frozen in amber, after all, his playing on Halo and Skinner’s Black Laboratories differs as much between those recordings as it does from his playing in the context of Blind Idiot God.

In an ensemble context Hawkins is as much responsible for casting forth swarms of sheet metal skree as he is for peeling off proto-stoner metal riffs such as in the driving ‘Slackjaw’, from 1992’s Cyclotron, or providing skeletal, delayed-to-high-heaven jangling dub lines in ‘Slackjaw’s immediate successor ‘Ground Lift’, switching effortlessly and smoothly between styles with toothy grace.

Sure, the sheets of guitar and trem-torture are still present, but here they are used less violently, swathed in echo and warped tape effects to give an eerie underwater ambience, with the cavernous reverb and delay trails often crushing the sounds before they reach the ears, creating the illusion of oceanic depth.

For this recording, Hawkins is joined by ex-Khanate and current Blind Idiot God drummer and percussionist Tim Wyskida. Sensing that kit work would not be in fitting with the bathyspheric twilight ambience conjured by Hawkins herein, Wyskida chooses instead to utilise an orchestral percussive ensemble consisting of a concert bass drum, two orchestral tympani and a gong, a set-up that allows him to generate low frequency booming pulses and sustained waves of harmonic splash, tones perfectly in fitting with the watery depths being plumbed by Hawkins.

There are two tracks present on the LP version of Prospects Of The Deep Volume One, ‘Oblivion Of The Deep’ and ‘The Argonauts Reckoning’, with a third, ‘Voices Of The Drowned’ held back for the CD version, owing to obvious time constraints with vinyl, and all are very much of a piece, creating an all-enveloping mood that submerges the listener fully into Azonic’s deep-sea acoustic environment.

From the first booming thud of Wyskida’s timpani there is an undercurrent of dread that runs through the three pieces here, a sense that, once Hawkins’ warped ripples of guitar begin to lap against Wyskida’s percussion, creates the sensation that where we are is fathoms down in some benighted oceanic abyss, water pressure crushing our ears, watching the writhing of some grotesque yet strangely beautiful unearthly denizen of the depths twist and undulate in the inky black depths just ahead of us, ever unsure if it has eyes with which to see us.

The dread comes in waves, shot through with moments of shimmering beauty as Hawkins’ guitar rings and shudders through the dark, notes and chords bending and stretching, loops of delay crashing and decaying around them whilst Wyskida stalks around and through, adding subsonic booms, ghostly taps and minimalist distant gong washes.

More than an ‘ambient’ recording, Prospect Of The Deep Volume One is both mesmerising and engaging, haunting and haunted, firmly establishing a world of sound that we can but hope will be revisited in subsequent volumes, the next of which we can also hope won’t take another 23 years to emerge.