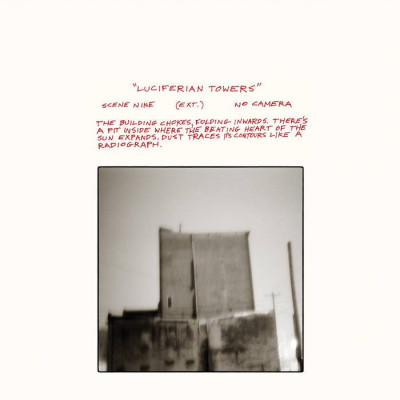 I’ll always remember one small thing the Editor for Echoes & Dust said when discussing Godspeed You! Black Emperor. The conversation (as best as I can remember under the circumstances), consisted of discussing various ‘major’ post-rock acts, and how their style is often emulated within the scene, how new upcoming bands look towards these acts and take great influence by their sound, to the point of simply being another version. However, when it came to Godspeed You! Black Emperor, our Editor said ‘Only Godspeed do Godspeed’, and it got me thinking more about it. Of course, nowadays, we can find many similarities between Godspeed and other bands, though I believe there’s a level of truth to the somewhat offhand comment, and it is with albums like Luciferian Towers, the latest offering from Godspeed, that we see exactly why.

I’ve always felt there’s a certain level of presence to the music Godspeed You! Black Emperor have produced in their career.  Listening to just about any record from the band is to fall into a deep and murky world that offers a somewhat cynical yet justified view on the world we are living in today. Political sentiments have rung true in just about every single Godspeed You! Black Emperor release, though we see here on Luciferian Towers a real fervor in these sentiments, a real need to express these ideas and notions before it all becomes too late. What makes it all the more powerful is just how beautiful and emotive the tracks all are, how it all expresses an incredible range of emotion and feeling whilst still having a powerful level of impact in its sentiment.

Musically, this is a ‘true’ Godspeed You! Black Emperor album all the way through. It features the customary balance of extended droning compositions, offset by powerful post-rock that pulls us though a range of emotion from sullen acceptance of the current state of affairs, to an almost wild frenzy of believing we do have what it takes to change everything. As the album progresses, we’re introduced to the current landscape with the brilliant marching stomp of ‘Undoing a Luciferian Tower’, before throwing ourselves into the bombastic and phenomenal energy of ‘Bosses’ Hang’, which in many ways feels like a call to arms, a command to rise up and speak out against the atrocities we’re facing in the world. Things are fucked up, and were allowed to be angry about it, and we deserve change! We’re then offered respite in the form of ‘Fan_ Famine’ before launching into the beautiful and aptly named closer of ‘Anthem for No State’, which could quite be one of the best compositions to come from Godspeed You! Black Emperor since their more earlier years.

It feels somewhat that following the release of their 2015 album Asunder, Sweet and Other Distress that Godspeed You! Black Emperor were beginning to alienate their audience somewhat. Now though, we see a real true return to form, with Godspeed producing not just one of the strongest albums of their career, but also of this year. It’s hard not to get completely swayed and pulled into all the myriad emotion that the band produce. The music speaks for itself, expressing itself effortlessly without words or vocals of any kind. This is the kind of music that can easily be understood by any who choose to listen to it, and those who it ultimately speaks to on some level with find themselves forming a strong bond with both the music, and the sentiment it is trying to express.