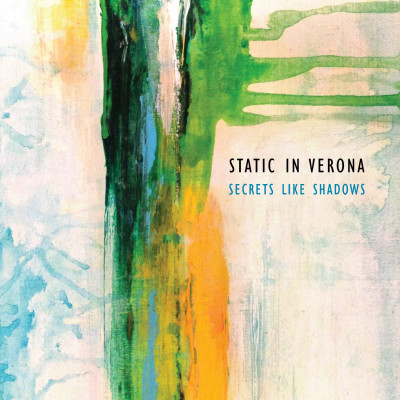 Static in Verona has made their musical currency a kind of maximalist, more-powerful-than-power pop sound rich in layered instruments and vocals and almost contagiously jubilant. Fans of the previous Odd Anthem will find Secrets Like Shadows no disappointment, a logical and appealing musical sequel.

That said, it’s not clear that Secrets Like Shadows hits the listener in quite the way it was intended. Rob Merz, the solo artist behind Static in Verona, says he was going for a more guitar-centric sound — “I really wanted to bring it back to how it was when I started recording, and build songs around the guitar again.” But while guitars are definitely part of the multi-tracked sound, they don’t stand out; if anything, several of the songs are distinctly drum-forward. And as with Odd Anthem, the guitars, synthesizers and vocals all blend into a coherent whole — one that coheres so very well that it can be hard to pick out any individual instrument or voice, despite Merz’s claimed desire to do just the opposite. A downside of this is that the lyrics can become lost in the overall sonic impact; but the sound itself is nothing short of impressive.

As with Odd Anthem, Merz constructs Secrets Like Shadows with care, starting with the hooky, engaging ‘Madeline’ and balancing sweeping, dreamy pieces like ‘The Royal We’, with its echoes of both The Verve and Mott the Hoople, with peppy numbers like the pogo-ready ‘Last Night’. The album might have sounded too same-y if not for the digressions of tracks like ‘Effigy’. “Cover your ears so you don’t hear them shoot the messenger,” Merz advises ironically on the powerful closer, ‘Hear No Evil.’

Static in Verona falters only occasionally: ‘Say It to My Face’, the fourth track, starts with an intro that builds and builds, leading the listener to expect an emphatic bang, but the energy peters out to an (admittedly shimmery) letdown; ‘Burning Flowers’, the sixth, leans hard on a siren vocal wail that gets very old by the discordant, difficult end of the song.

Merz’s potent talents — for vocals and for arrangements in particular — are everywhere evident. ‘Sleeping In (Dreams)’, a catchy selection seemingly perfect for a radio single, makes unusual use of vocals as a bass line. Unlike many pop musicians, Merz knows the power of a pause or a quiet break, and employs it effectively as on ‘The Royal We’. Most probably a natural tenor, Merz displays a broad vocal range across the album that provides for some astonishing harmonic tsunamis. On the beautiful ‘Hesitate (So It Goes)’ you’ll be challenged to believe all the vocal lines were created by a single singer.

Secrets Like Shadows is a catchy package of toe-tapping, harmony-centric pop featuring full-cream layered vocals and instrumentation. You’ll be forgiven for recognizing the ghosts of bands that came before (‘Effigy’ seems haunted by the Payolas’ ‘Eyes of a Stranger’; ‘Last Night” evokes ‘Mrs. Robinson’), and the album is a logical heir to the sounds of power-pop ancestors The Beatles, XTC, and even Madness — but none of these overwhelms Static in Verona’s essential purity: nothing else out there sounds quite like it.

And it sounds terrific.