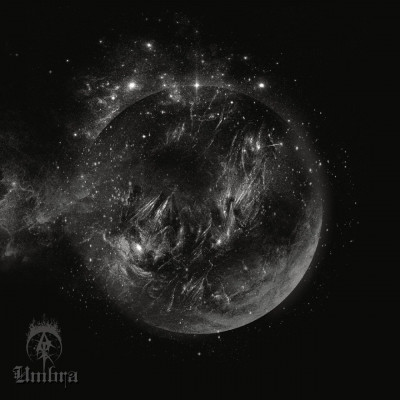 Iceland has really been having some great acts come out of their country lately. I guess when you live in a place which is a giant cold active volcano founded by Vikings, you can probably expect the kvlt level to be kind of high.

Almyrkvi really keeps that bar high with their first full length, Umbra. ‘Umbra’ is a great word to title this album. ‘Umbra’, in case you didn’t know, describes the fully shaded inner region of a shadow cast by an object, especially the area on the earth experiencing a total phase of an eclipse. This is the actual description of this album. It is somber, it is heavy, it is a punch to the gut. A cloud of devastating black metal which will hang over you the whole album.

Umbra’s, in keeping with the astronomical meaning, lyrical themes are with about the cold vastness of space and the cosmos, you know deep stuff. Now in my opinion only one band does space black metal right, or as I like to call it blackstellar metal, is a band from Bern, Switzerland named DarkSpace (If you haven’t heard them, you need to). Most blackstellar metal bands are real cheesy and don’t really capture how trve space is. I mean, it is a dark cosmological void of nothingness and extreme temperatures in which you will die a horrible suffocating death, super kvlt!

Almyrkvi, however does capture it correctly, even their intermissions between songs are just the right amount of space and spooky where it isn’t over done and tasteless. Parts of this album are just heavy. Almost in a doom metal fashion where the listener is just crushed with distorted guitar riffs, hefty bass lines, and thundering drums. The vocals are the same, in some parts guttural growls, then mixed with your traditional black metal screeching. The track ‘Stellar Winds of A Dying Star’ is a great example of this mixture of overwhelming doom and black metal bleakness.

Another great track on this album is ‘Cimmerian Flame’. It is so heavy, I really do feel like I fell into a black hole and am being crushed and spaghettified on a molecular level. It opens with a haunting guitar note and then kicks into a crushing running bass explosion. The song then slows to a crawl, really letting the listener peer over the event horizon into the cosmic abyss and see only madness. I really think if you play this one on the rise of the milky way, you will summon the Old Ones.

Almyrkvi really did a number on this album and for being a debut, this is really a ripper. I look forward to their next album and hopefully being able to seem them live.