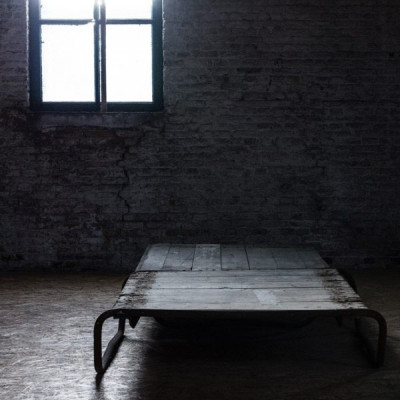 Charnia are clearly not a band short on ambition. Shortly after release of their quietly acclaimed debut Dageraad they played a show at avant-metal label Consouling Sounds’ cafe in which they decided to dismantle their post-metal arsenal and reconstruct themselves as a drone/modern classical outfit, playing an improvised piece along with violinist Jens Debacker. This became the seed for their follow up Het Laatste Licht (The Last Light), a piece they’re refined over a few years before deciding it was ready to put on record. Whilst they’re far from the first metal band to dabble in ambient and drone – think of Neurosis and Rosetta’s experiments with complimentary albums meant to be played side by side with Times of Grace and The Galiean Satellites respectively for instance – such excursions are often mere calm-before-the-storm tonal pieces to set the more typical grinding guitars against. It’s rare to see a metal band attempt to drag such sounds entirely into their wheelhouse the way Charnia have.

Ostensibly one single piece Het Laaste Licht is made up of several distinct movements. The first 7 minutes are made up Gregorian style chants and anxious, knottily interwoven strings (courtesy of Debacker and double bassist Innerwoud) that recall Godspeed! You! Black Emperor at their most abstract, or perhaps Dirty Three at their loosest. This fades into silence before the second act begins; a more traditional post-rock style build with fluttering guitars, a plaintive three note guitar refrain and drums and strings which threaten to explode with life with each repeated phase. It’s familiar stuff for any fan of crescendo-happy post-rock but before it reaches the seemingly inevitable peak it dissipates into a droning bass lamentation with violins that sag with sorrow for several minutes of disquiet and restlessness.

Each movement simmers with the same bristling tension. There’s a clear switch at 23 minutes where this new version of Charnia built in the Consouling Sounds cafe, the one that sounds like it’d fit in just as comfortably with the neo-classical/ambient/drone alumni of Denovali Records, takes a back seat to the post-metal band who introduced themselves on Dageraad. As soon as the thumping kick drum and toms thunder in we’re definitively back in Metal Band territory. It’s not the most elegant of transitions between the blackening skies and the storm itself, but this version of Charnia has lost none of its power. The strings drift into the background as rumbling distortion takes centre stage, with the slightly muffled yet abrasive screams of guitarist/vocalist Jelle Pieters sounding as if they’re coming from behind a door, trying to break it down through sheer power of voice. With mammoth backing vocals that sound like they’re being sung from the tops of mountains we get the crescendo threatened in that earlier movement for a few thrilling minutes before the drumming stops and the distortion disintegrates into static and feedback.

There’s a further section of haunted chanting and a slow dual guitar build before Charnia truly make good on their promise, as the two Charnias intertwine at last with fevered strings and furious vocals coming together for a stirring, emotional coup de grâce before the last few sighing moments of lingering guitar notes drift into nothingness. Despite the clumsy transition between the initial droning beauty and their usual heaviosity the final 10 minutes demonstrate that they are capable of finding a rare fusion of their two sides that complement each other perfectly. Het Laast Licht is an album that brushes with greatness at times and suggests that, like fellow Consouling Sounds act Amenra before them, they’re a band who can transcend the usual post-metal tropes and deliver records that move the spirit as much as the mosh pit.