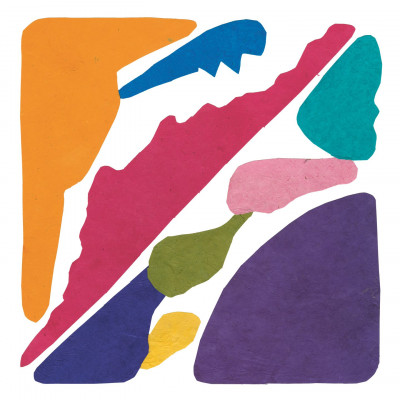 All Together Again by Peter Broderick

Like the 9 separate coloured shapes which adorn the album’s cover, the tracks on All Together Again are an assembled collage of musical pieces compiled from various projects and requests. These range from soundtracks for films, installations, and fashion shows to ferry rides, weddings, and anniversaries. Despite this, seemingly disparate, approach to the curation of this record, a coherence and narrative journey can still be felt throughout. This is entirely due to the captivating character and musicianship of Peter Broderick. Imbuing each recording with a sense of invigorating and rejuvenating optimism, Broderick somehow captures a life-affirming buoyancy that is laced with such a gentle sliver of melancholia that it never tips over into saccharine indignity.

Opening with the sort of breathy vocals that Ian William Craig has treated us to over the past five years, ‘If I Were A Runway Model’ soon has violins swishing, soaring, and parrying. Piano motifs guide us along a passageway, both real and imaginary, which leads to a hefty bass thump and questions calling to mind that which is hidden and out of sight.

“What’s behind the door?”

“What’s beyond the end?”

Lofty notions of mystery and morbidness which seem to juxtapose the light touch of the musical arrangement. The realisation of this hits in the latter third of this first track – back are the airy voices but this time they are underpinned by a more determined piano piece, dealing with darker tones.

The second cut (‘Robbie’s Song’) moves into more typical post rock territory, building towards an ever escalating sense of wonder and then ‘A Ride On The Bosphorus’ arrives. A 17 minute odyssey evoking a ferry journey across the named Turkish strait. Bubbles of chiming chords dance across repetitive piano ripples. Violins jauntily stretch their legs and there is a creak of sail-saddled masts. The pace here casually mounts. First by gentle rolls and fills across snare rims, hi-hats, and light crashes before the bass engine throbs, kicking out a diligent rhythm. This feels like travelling aboard a wind-sprayed and sun-glazed vessel. Dipping and rising. We aboard, as it makes its way across watery undulations. The accuracy of the mood which Peter Broderick has been able to induce here is really quite astounding. It is reminiscent of Tortoise’s ‘Djed’ but with a nautical twist which lightens and edifies.

From here traces of Broderick’s previous forays into folkier pastures can be found. Fingerpicked guitar, rural fiddle, and tranquil piano keys permeate tracks like ‘Emily’ and ‘Atlantic’. When then combined with his understated vocals it’s almost impossible not to summon recollections of earlier dalliances with indie folk band Horse Feathers.

As the record draws to a close, we are reminded that “It’s really about listening with more than just the ears” and part of this is recognising the continuous thread pulling all of these tracks into one place, that man – Peter Broderick – bringing All Together Again.