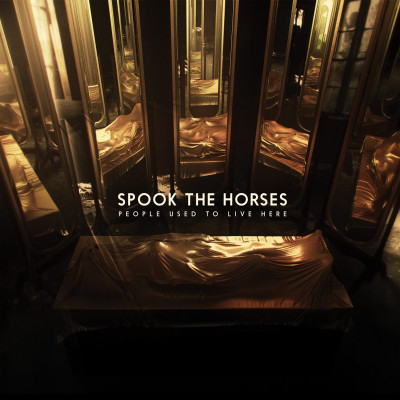 People Used To Live Here by Spook The Horses

One of the many benefits of writing for a site such as Echoes And Dust is the sheer saturation and introduction to music that I had been previously unaware of. Well, they’ve done it again in exposing me to Spook The Horses. With the album People Used To Live Here having been released on November 10th through Pelagic Records, Spook The Horses execute an almost complete about face from their last record Rainmaker which was decidedly more heavy, riff centric, and certainly more vocal. Whereas People Used To Live Here borders an almost slowcore vibe. Not one that just stammers about with no clear end in sight. Spook The Horses obviously have an endgame in view.

Off kilter(not off time)harmony and a touch of downtrodden progressive song writing style fuse with a sound that is morose in tone but doesn’t leave listeners reaching for misery. More of a slightly glum understanding of the human condition and the connective tissue that binds us to music that is not just heard but experienced as a release and somewhat therapeutic. Not a catalyst for violence. However, do not mistake my words. This is far from an album of jangly pop hooks and happy go lucky lyrics. Just one that does not cling to despair. Undertones of doom and providence abandoned still prevail. Barren and simplistic song structures leave our ears with a more self-interpretive and roomy musical space to engage with. The vocals that are there are minimal, a preference of mine, and the familiar throaty groan is absent leaving only a stripped down, centered, and more ardently expressive direction.

One might ask, “How can that many styles combine and actually come out with a coherent musical thought?” Sheer musicianship, that’s how. And also a concerted willingness to continue to refine their personal musical expression and not obey the restraints of the genre of Post Metal they previously could have been poster children for. Spook The Horses have sent a memo to the masses that they are not band who can be easily cast off into the margins and have authored what I believe to be their best work to date. So if you find yourself looking for something a little off center but not veering into the area of avant-guard, sit down and explore People Used To Live Here.