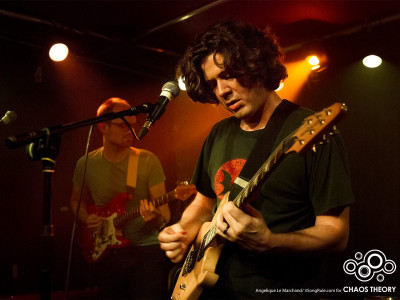 Thumpermonkey at The Black Heart, Camden

Five years is a long time in music. It was back in 2012, when the Stabbing A Dead Horse tour saw Knifeworld, The Fierce and The Dead and Trojan Horse sharing a stage, that this genre last saw a bill as strong as this. The genre between genres, that edgily mixes up post rock, an abundance of time signatures and whatever else comes to hand, delights in throwing the rule book out of the window, making it a difficult scene for a band to ape. It’s a sound oft-labelled “pronk”, the bastard offspring of prog and punk. Like this divisive term or not, it could be applied to all three bands on this evening’s bill.

Somewhat unsurprisingly, many bands who get branded with the pronk moniker owe a weight of debt to Cardiacs. Ham Legion fall squarely into this category. The musically ambitious Brighton-based three-piece consists of Mikey Parsons on drums, Sam Clarke on guitar and bandleader Nick Howiantz on bass and vocals. They are a young band with great potential, even though they are a little rough around the edges. Opener ‘Lamb Chops’ shows a band with a sure aim, at times veers closer to “prettal” than pronk. 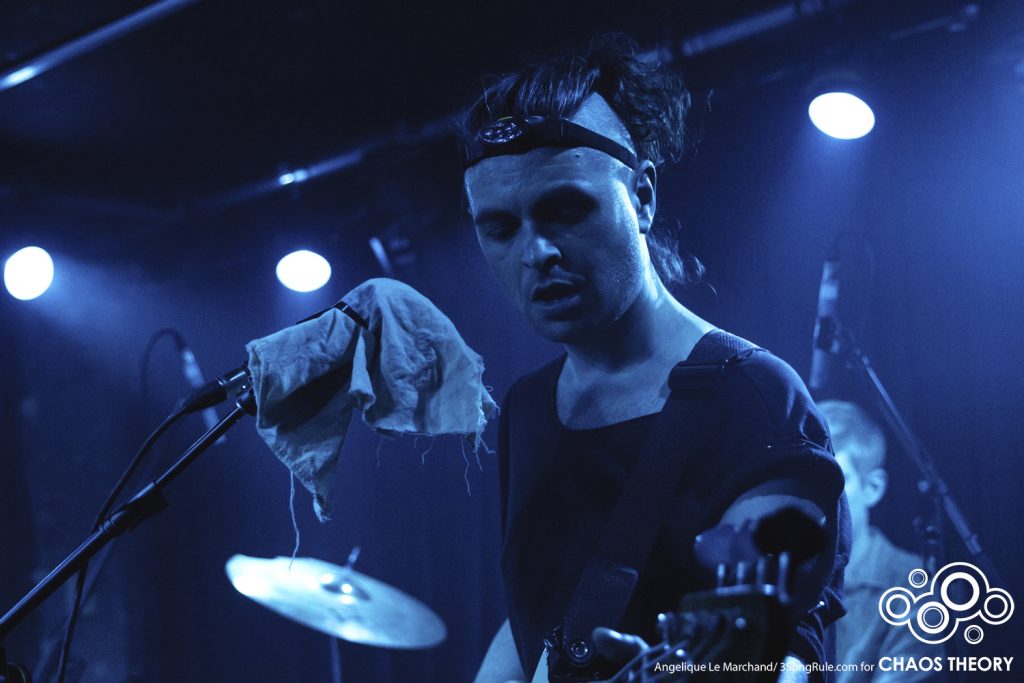 Ham Legion’s Nick Howiantz performs this evening as though determined to be hoarse by the end of the set, alternating between guttural and melodic styles throughout. Photo: Angelique le Marchand

Having adjusted to a line-up change that’s seen guitarist and vocalist Emily Sands’ departure, they only tackle two tracks from their recorded output. ‘Flopsie’ features a delightful moment towards the end when Parsons’ drums direct a change in the subdivision of the beat underpinning Clarke’s guitar riff. Their new songs shows a band developing nicely, although some of Howiantz’s vocals are too affected, perhaps, for the Black Heart in Camden.

The Fierce And The Dead are not most original of the revolutionary bands that have gravitated together on tonight’s bill. Mind you, on current form, they are the best. Performing a live set that’s been honed over the last 12 months, they’re a scintillating live band, as Field Recordings demonstrates. Part of the incredible live appeal of The Fierce & The Dead is their ability to harness post-rock’s loud/quiet dynamic in compact compositions that are sufficiently clever to keep the intellect amused, whilst heavy enough to headbang along to. 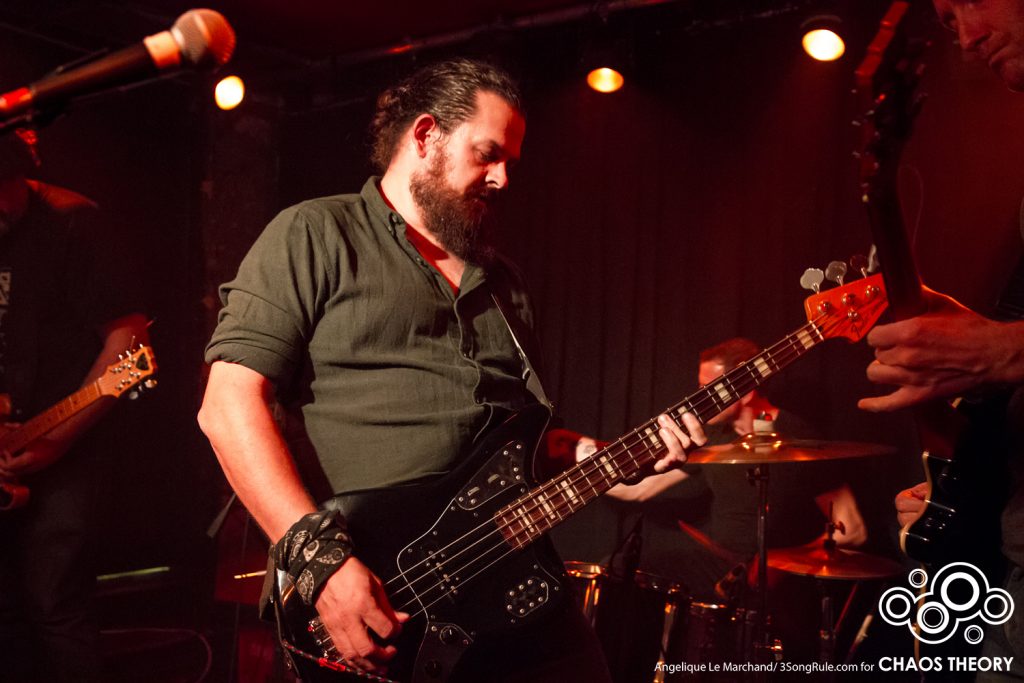 Each tune in their set has its own unique charm. ‘Magnet In Your Face’ is a direct, brief assault and an early calling card. ‘1991’ sees two polarised guitar styles juxtaposed on top of each other, Matt Stevens playing shrill, syrupy lines whilst Steve Cleaton provides a dirgey, grungy strum. ‘Truck’ sees Stevens and Cleaton playing in unison, the counterpoint provided by Kev Feazey’s distorted fuzzy basslines. ‘Dancing Robots’ contains monster guitar riffs and finds its momentum in Stuart Marshall’s crisp, neat drum patterns. After a dissonant start, ‘Verbose’ sees Cleaton adopt a textural repeated-note motif whilst Stevens lets rip with a powerful, obviously melodic riff. By the time the piece reaches its apex, Stevens’ wild soloing has taken on a personality all of its own. 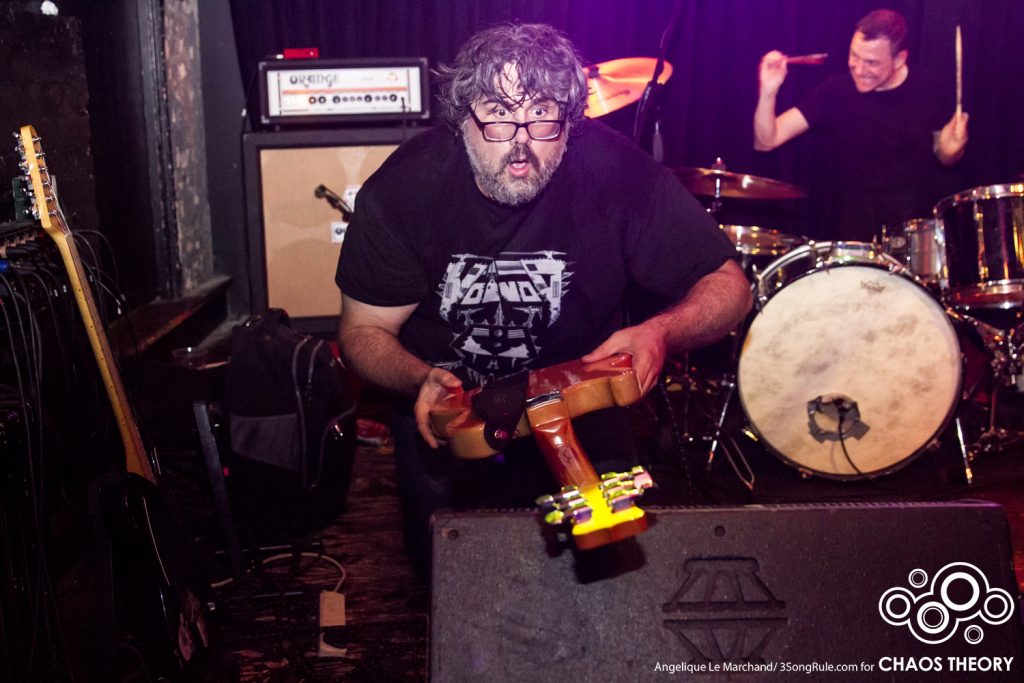 The set culminates in ‘Parts 7 & 8’, presumably to appear on the forthcoming album. By now, the band are locked into a groove that means even the most chaotic of sequences contain a inner harmony between the parts. Possibly through-composed, the two-part tune is amongst their most proggy offerings to date, with twists and turns aplenty over its run time and a subtlety sometimes lacking from TFATD’s direct approach. The visceral ‘666…6’, taken from early release On VHS, rounds out their performance, an orgiastic mess of feedback, flurries of drums and devastating riffs in each refrain. By the end of the set, Feazey has let his hair down, Stevens has wondered off stage to get beer, which he proceeds to pour all over him, and a rowdy mentality has overtaken a crowd appreciative of the raw thrills on offer.

Five years is a long time in music. Across London Town, at the Palladium, theatre-goers flock to see Rain, a Beatles tribute band ably performing Sgt. Pepper’s Lonely Hearts Club Band alongside songs from throughout the Fab Four’s career. It’s remarkable, hearing The Beatles’ songs performed live in chronological order, how they made leaps and bounds forward in such a short period of time. Whilst it’s not realistic to expect 21st century Thumpermonkey to have made the same progress in the five years since their last recorded output, as The Beatles did in the mid 60s, the new material does show a maturation to the band, who focus on the new, this evening.

It’s evident that Thumpermonkey have taken their time to get things right as they proudly open with three songs from Electricity. It’s brave, given the EP is being launched this evening, and hence won’t have been heard by the audience, but the material stands up. Kicking off with the dual guitar barrage of ‘This Is Not A Fire’, a plaintive middle section leads into one of the band’s most bludgeoningly riff-heavy endings. ‘Tzizimime’ blends grungy guitars and eastern melodies, whilst ‘Garmonbozia’ starts subtly, before launching into a frenzy of delayed chords and bold vocal refrains from Michael Woodman. 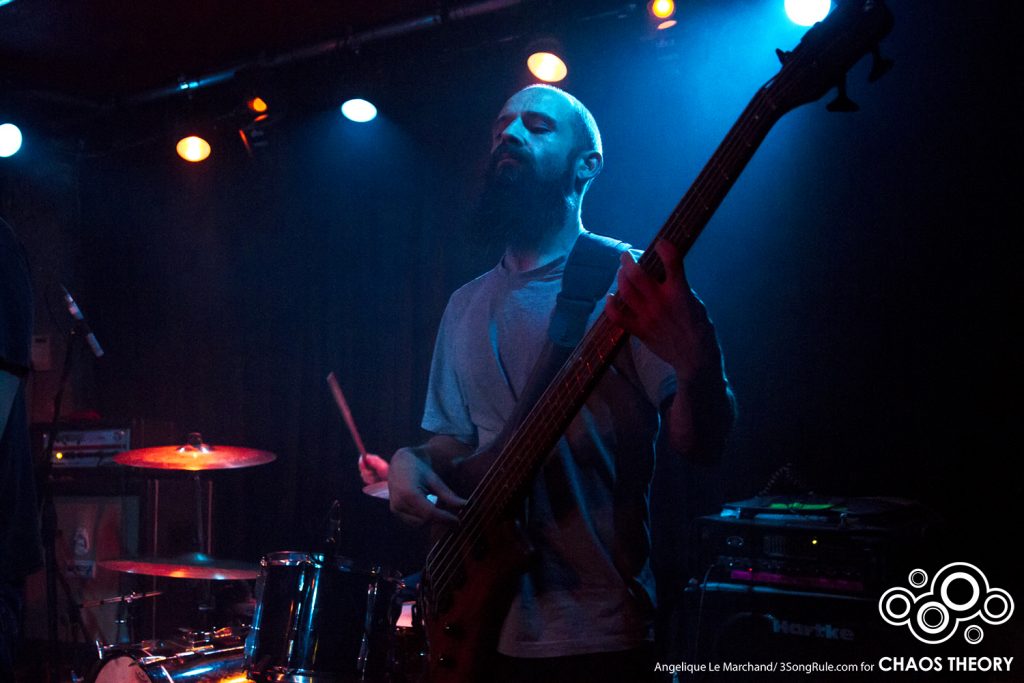 Three further new compositions pepper the rest of the set. They all shine, bright beacons lighting the way towards the ensemble’s forthcoming album, Make Me Young, etc. Rael Jones spends much of the time playing keyboards, and does so with finesse, adding a neo-classical air to proceedings. Elsewhere, ‘Proktor Cylex’ adds a touch of spoken-word drama, and ‘Wheezyboy’ makes for a spirited encore. 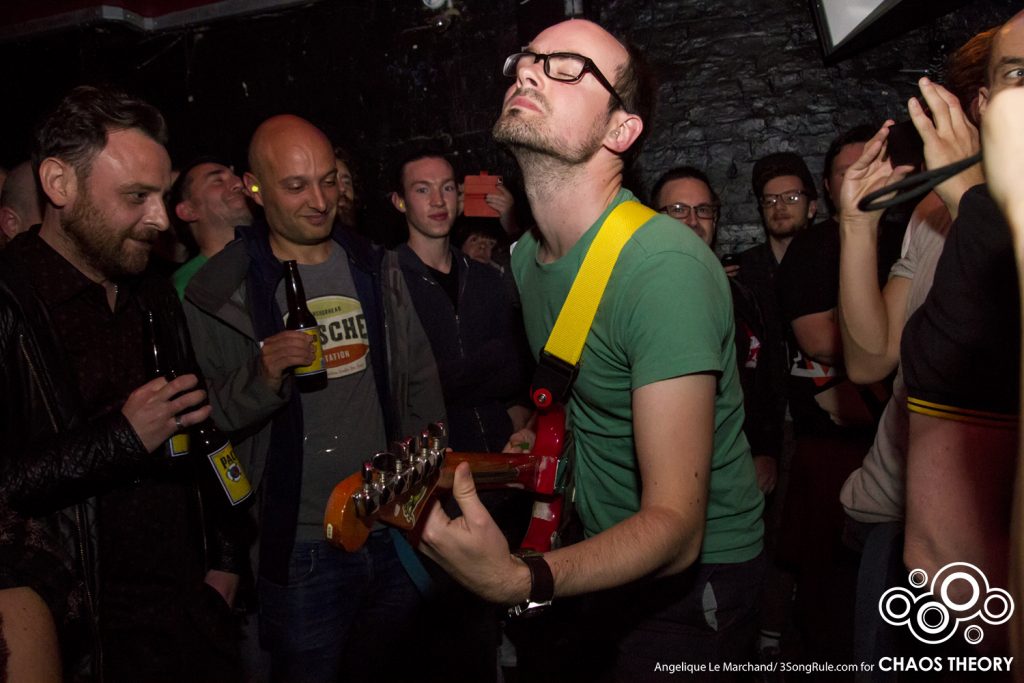 Rael Jones takes up residence in the crowd for his guitar hurrah. Photo: Angelique Le Marchand

Thumpermonkey are an ideas band, and the creativity presented in their songwriting is a joy. They’re not as well-oiled a live ensemble this evening as The Fierce and The Dead, but it’s not a battle of the bands, and credit should go to Kunal Singhal and the Chaos Theory team for putting together such a strong and coherent bill. Thumpermonkey, The Fierce and The Dead and Ham Legion are three unique bands that all find surprisingly fertile soil in that apparently rocky middle ground where progressive rock and angular punk meet. Just whatever you do, don’t call this intersection pronk.