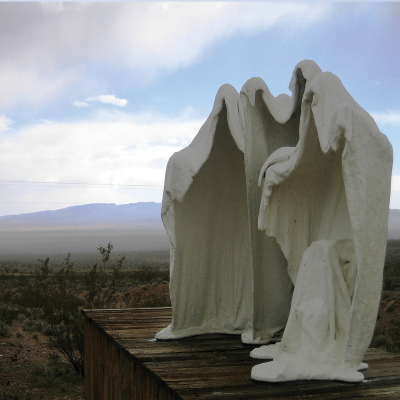 Abandoned Glow is essentially an album that sounds like what I imagine the aliens from Killer Klowns From Outer Space listen to. Erected from a labyrinth of grotesque and menacing sounds it exudes an almost constant sense of unease and at its most friendly sounds like some sort of gnarly late night solo venture into psychedelics. Flange Circus is revitalising the scary clown scene; it’s a dirty job but, someone’s gotta do it.

‘Great Divisions’ opens the album with some hideous backflipped vocals, distorted and muffled to the point of sounding like an unsettling synth pad. The main synth line kicks in and fucking rocks hard like something by Gallops or Gum Takes Tooth; this is a synth lead with a focus and a drive. The layers underneath pound away diligently; guitar sounds and extremely electronic drums pulsating. Everything sounding very digital, almost aggressively so. But, it works really well and it feels really maleficent in the process. Don’t trust those almost Argento-esque chimes, they’re just that; a foreboding of horror, the track explodes into a noisy explosion of guitars and synths at the end and I feel like as soon as it’s over, we have a good idea of what this is gonna be. One long tour through gnarly, head-fuck synth-rock.

The sophomore song, ’Fucko The Space Clown’ rocks up with some creepy dissonant prog shit that sounds like a Final Fantasy boss fight presumably against some weird clown monster. I have to say I really enjoy it as fucking west as it is. I don’t wanna meet Flange Circus after this…the whole record is the stuff of nightmares. The breakdown in the track even sounds like something from Nightmare on Elm Street with a bit of Ghost thrown into the mix. It’s fucking warped.

‘Strange Hairy Airport’ is mainly propped up by its nicely aloof guitar work and wretch-inducing choral pads though, it’s not nearly as sickly as ‘Homunculus Gardens’. The two tracks feel like spinning round and round on a fairground ride whilst completely fucked and whilst it’s definitely highly pleasurable, the urge to vomit is overwhelming. The climax of ‘Homunculus Gardens’ is fucking great. I love the dramatic guitar work.

At this point the album goes through some what of a wormhole, ‘In The Pestilent Folds of Chub 99’ provides a track as elaborate as its title; it’s primarily sample-driven by for the most part its allure comes from its beautiful bassline, everything else seems design to make the listener nauseous again. The violent eruption of the track is pretty sick though, in of itself.

When ‘Moloch By The Sea’ first came on with its serene flute-like pads, I thought “I’m not buying this”, seconds later we have medieval sounding drums and strings that sound like they were made on Sibelius. Flange Circus is definitely the work of some sort of sociopath or misanthrope seeking to make music that has the same effects of a cigarette: it makes you wanna spew, then it makes you want more, then you start to love it.

Well, ask and you shall get ‘Dehibernation’ is in a similar vain to the first few tracks but, is no less decent. However, I feel ‘Kwak’ adds something new to the table leaning a bit further away into the weird pad-based psyche territory: once again the bassline is fucking incredible. I’d say it’s the strongest facet of the album and a lot of the time I don’t even give a shit about bass in other bands. I would definitely suggest this album to those who feel an affinity with the rhythm section. ‘Zerodom Heritage 2016’ plunders further into this krautrock-ish exploration of the albums bass and drums though, it does maintain that sickly melodic abrasion as well.

The penultimate track ‘Mellow Birds, Mellow Beards’ is mostly comprised of warp samples sounding like a very intense trip amplified by a fuckl-oad of nitrous oxide. If that’s your thing…

‘Gnu Fantasy’ closes the album and it’s fairly obvious as to why: the track slowly builds from nicely executed pads into the most accessible and well-rounded piece of music on the entire album. It feels like it’s all been building to this moment. Although, I do feel like this LP could have shed a couple of tracks to get to this point faster and in a more well-rounded fashion, I have to say this is certainly worth your patience. The pulverising guitar and drum work is a welcome reward to the listener for reaching the album’s summit like a cool precipice to survey everything out there and relish in all that lead to this point. I thought it was a really strong closer.