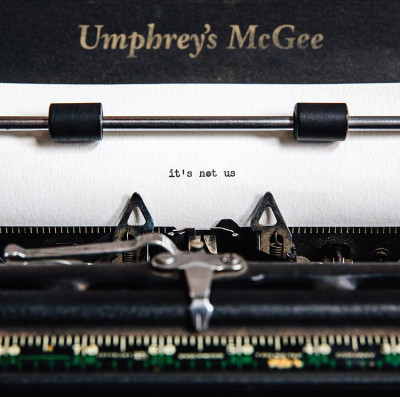 it’s not us by Umphrey’s McGee

Twenty years is a long time. My wife and I have been together for over ten years, and we go between feeling like we just got together, and knowing each other forever. The thing is, that’s just us, two people in a relationship. Now, think about twenty years in a band. That’s where improg masters Umphrey’s McGee are at in 2018. Few bands make it to twenty years together, let alone have the kind of success that a band like Umphrey’s has had. When guitarist/vocalist Brendan Bayliss, bassist Ryan Stasik, keyboardist Joel Cummins, and original drummer Mike Mirro got in a van and headed for Chicago from Notre Dame, they had no idea that it would become their life’s journey. Soon other lead singer and guitar player Jake Cinninger and percussionist Andy Farag joined and, as they say, the rest is history. The sextet, now of course with Kris Meyers on drums, has just released their eleventh studio album, it’s not us, on their own label, Nothing Too Fancy Music.

Umphrey’s McGee built their reputation on playing live. Much like one of my other favorite artists, Bob Schneider, they will play many songs live long before they ever record them in the studio. In this time the songs can take on many different configurations and be played many different ways in between. It’s always interesting when they do finally decide on the definitive version of a song to record, because it’s usually still different than any way you have heard it live. Opening track ‘The Silent Type’ is a perfect example of this. Originally titled ‘Cig Stew’, it’s been played many different ways before the version we hear on it’s not us. Umphrey’s recorded a straight up rocking version, which is definitely the best so far. The opening line is probably one of their more memorable, and the groovy punch it flows in totally suits it. Another song that was morphed into something else is ‘Maybe Someday’, which could be traced all the way back to 2008’s ‘Waist Down’, a UM original that has disappeared from their repertoire. One song that sounds true to the live version, dating back to 2011, is ‘Forks’. At this point, due to the album release party, the only song remaining off it’s not us that hasn’t been played live is ‘Dark Brush’.

Even though Umphrey’s McGee has been pushed into the jam band genre, the foundation they build their music from is far from it. Sure, they are one of the best free flowing improvisational bands out there, but their ability to switch and blend musical styles is well out of many other band’s league. This is why they can play a song like ‘Looks’, that flows from a bouncy 80’s synth to a half-time grind, and make it work. They can also go from some mellow prog rock  grooves at the beginning of ‘Remind Me’ to something that sounds like it came out of a Dream Theater song during the bridge. Then UM can follow that up with a delicate folk track like ‘You & You Alone’, and also funk up some jazz with the help of Joshua Redman on ‘Speak Up’, proving their musical ability and talent has no bounds.

When Umphrey’s McGee were introduced to me by an old hippie buddy of mine. “You’ll prolly dig these guys. They’re a jam band with metal guitars.” he said, handing me a burn of Anchor Drops. Boy, did he under sell them. What UM started twenty years ago culminates on it’s not us. They are a band with no limits or restrictions on what they create. For this, if you ask UM, they will thank the fans, hence the name of the album. That’s what helps make it’s not us the best representation of Umphrey’s McGee to date.