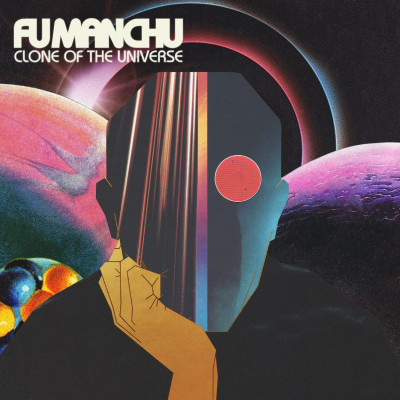 Clone of the Universe by Fu Manchu

Californian stoner-rock band Fu Manchu have chosen the 9th of February for the proud release of their twelfth studio album Clone of the Universe. The album is accompanied by a mammoth 38 date tour spanning the US and much of Central/Western Europe, including the O2 Academy in Islington.

Initially looking a little short with only seven tracks, fans should fear not as, coming in at a run time of just under 39 minutes, this is one of the longer albums in Fu Manchu’s catalogue. This is helped in no small way by the 18 minute, 45 second doom-prog behemoth that is ‘Il Mostro Atomico’. Finishing off the album with such an unusual (for this day and age) track, is a bold choice that I feel reflects their approach to this album more generally.

But, I get ahead of myself. Firstly, this album is immediately identifiable as Fu Manchu. Known for a strong ‘wall of sound’ comprising driving guitars, slightly off-key vocals (sorry, Scott but it’s true) and thumping drum beats, lovers of the Fu Manchu formula will not be disappointed as this album has all of these elements in droves. Add to that the interesting uses of modulators, effects and props such as the Vibra Slap we all knew and loved as kids, I feel it’s fair to say that this album nudges the boundaries of expectation, while working within the familiar formula that gives the band its identity.

From a song-writing perspective, I found this record to be ‘business as usual’ in many ways with the vocal melodies and some of the lyrics in particular failing to leave me massively impressed. ‘(I’ve Been) Hexed’ in particular fell foul of this and I felt an otherwise solid track had been somewhat let down.

The slightly unimaginative elements are something of a shame, as Scott Hill himself has been quoted as saying, the band “are excited to get out and play this stuff, especially ‘Il Mostro Atomico’. We think it’s some the strongest music we’ve ever done”.

‘Il Mostro Atomico’. A song that I feel is likely to divide opinion. I’m almost certain of it in fact. As mentioned previously, it’s a monster at over 18 minutes and I remain very torn by its structure and content. In one sense, it’s one of the longest songs I’ve heard in a good while, but it hides its length well and the rise and fall of instrumentation and the transition between parts keep it fresh in your mind throughout. Something I think is definitely to its credit. On the other hand, those transitions, to me, split the song into quite clear thirds, making me wonder why they didn’t distribute it through the album in a more ‘millennial friendly’ fashion. Possibly even removing the middle third which I found to be the weakest.

Sound-wise, ‘Il Mostro Atomico’ puts me in mind of a dark sci-fi soundtrack. Something on the edge of horror; atmospheric but with a sense of urgency. And overall, I like it. There are some well-constructed sections and one part in particular that has a harmonized dual guitar riff that’s almost good enough to sell the song on its own.

In some ways, the more artistic edge to their sound is a feature throughout the album, an expression of underlying emotive darkness somehow conveyed in the structure of the riffs and the way the  band use either Phaser or Wah (or both); I can’t quite work out which but assume as the band’s web shop is called Fuzz-Wah, it’s almost certainly Wah. Or in some cases, in the bass guitar parts which for much of the album are almost not present but make some strong contributions on occasion.

Overall, Clone of the Universe is a strong offering from Fu Manchu, it’s a coherent album that works as a single unit (something many records fall foul of in my opinion) and it has some high-quality songs. My particular favourite is the first track on the album, ‘Intelligent Worship’, a song that has energy, a well thought out structure and guitar riffs a-plenty. To me, ‘Intelligent Worship’ would be the key first release, and it’s well placed as the opening track of the record.

With such a broad back-catalogue, there are already a considered list of Fu Manchu fan favourites but it would surprise me if by the end of this tour, that list isn’t a few songs longer from the Clone of the Universe track list.

Lovers of the Fu Manchu formula will not be disappointed. Energy, a well thought out structure and guitar riffs a-plenty.