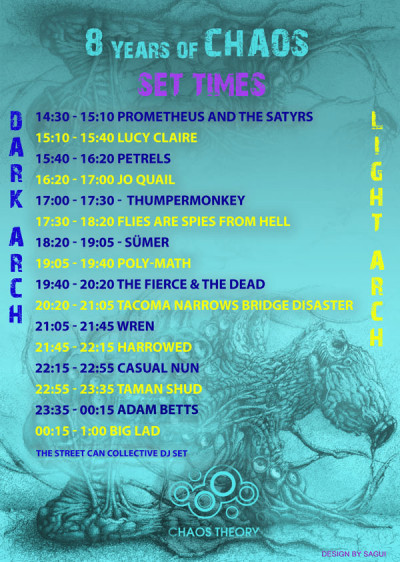 I arrived flustered and tired thinking I had missed Prometheus and the Satyrs. The reality of the situation was that I had arrived shortly after they began. I was immediately surprised by the transition of atmosphere as I was plunged from the outside world into some sort of medieval pageantry. Two figures sat upon the stage, with long straw-like hair dangling in front of their faces like noodles against a fork. With each song they switched instruments, usually playing strange folk instruments or employing an archaic sound through strange guitar-tunings and unusual rhythms. Towards the end of the band’s set another ghoul-like figure joined the fray adding a sombre, handheld drum into the ceremony as a strange figure danced around the audience and at the front of the stage. The band transcended the metaphorical proscenium arch and executed a performance that was both enthralling and utterly enrapturing; it felt as though we had been transported into their fable and that we were part of the show rather than a mere audience.

This festival quickly revealed itself as a portal into mystery, and this was just the beginning. Lucy Claire along with her band began a process of ostrenanie in the event; making the everyday strange with sweltering drones formed from cooing vocals and delays built on the bedrock of a seismic cello foundation and articulated by a methodical use of precision and instrument exploration of cymbals (bowed or beaten), a musical garden and a variety of other carefully manipulated aural additions. The music itself was sad and full of despair; I felt very at home in its impressive display of misery through discipline in performance.

The two first acts had gotten myself and a number of others excited for Jo Quail; during Petrels’ set people started to arrive en mass; at this point I collided with my In Violet bandmates (Sam Jones, Rory Dickinson, Chrissy Lopez and my wretched brother, Jake Murray) and our RPG Festival Quest progressed into a co-op affair. Jo Quail’s effortless soundscapes blew everyone away; Lucy Claire was a brilliant choice to lead into Jo’s set, I thought it was really interesting to see the difference in the performers themselves; where Claire chose a band to surgically exhibit her work, Jo Quail looped her way through an equally methodical performance on her own that for more or less the whole set seemed entirely effortless. The highlight of the performance for me was when Jo played a new, unfinished track that she confessed in her characteristically endearing between-track banter she was nervous to play in case it all went wrong. Then, in typical Jo Quail fashion, she absolutely tore the house down and made it look like it was about as much effort for her as sending a fucking tweet. A seriously impressive set, especially for a solo performance.

It’s a bit hazy but, I think at this point we upped the drinking significantly. I don’t recall much of Thumpermonkey apart from their cover of Cleft which ended up creating the strange sensation of us leaving the festival later that night with a Cleft riff stuck in our heads without them even playing. That was pretty cool. I think part of the haze was created by the fact that the festival was crawling with friends of myself and my In Violet RPG festival squad, aside from the usual delight of spending time with the rest of the Chaos Theory crew, there was also the likes of Asher Kenton (Portals, Codices), Chris Dench (Goodsouls) and the various people from bands that we knew.

Speaking of which. . .  Jake and I have both had the pleasure of working with Flies Are Spies From Hell in the past and I’ve seen them quite a few times now; and what I have learned from those occasions is that the fuckers never disappoint; though I do find that I am increasingly watching Chris Chapman’s guitar face over watching the band playing; I’m still listening intently whilst it’s all going on.

Sümer took us by surprise: I think as a whole their last track doubled as an embodiment of exactly what Kunal had in-store for us the whole time; it started off slow and moody and out there but, gradually, the riff was coming thick and fast. The ending was the absolute epitome of what a Chaos Theory Facemelter is all about. By this point in the festival I became frenzied, and after thrashing around manically to one of the most molten riffs of the evening, I glanced round my bandmates and the audience and EVERYONE was fucking blown away.

Prepping for Poly-Math was completed through a three-band ascension of the riffage and escalation of our alcohol intake as per the rules of the 8 Years of Chaos Theory RP-Drinking Game: drink between and during all bands, remember to intersperse with water . . . it’s important to stay hydrated. If you recall, I was in a frenzy so Poly-Math to me was like one long chaotic headbang of cataclysmic riffs and brief glimpses of Joe gurning away as he did his bass thing. I think this was my fourth time seeing Poly-Math; I’m enjoying their evolution immensely. They’re fucking sick.

The thrashing and riffs went to a whole new level with The Fierce and The Dead; they always know to bring the house down. It was like the riffs at this point in the festival reached their apex: like that slow-burning Sümer track the riffs had crept in at the start of the day and were absolutely spitting like burning embers by this moment. The Fierce and The Dead by this point have a lot of fan-favourites that never fail to blow my mind: songs like ‘1991 ‘ and ‘666…6 ‘ that are always nailed to perfection. But it was cool to hear new material in a live setting; I think it’s a testament to the video and the song itself that I already feel like ‘Truck’ is a new favourite from the band. The Fierce and The Dead: the gift that keeps on giving.

After TFATD, I unfortunately missed Tacoma Narrows Bridge Disaster because I got hangry and had to eat otherwise I would’ve gone somewhat insane. I have seen them before, though, and I imagine I’ll enjoy seeing them at future Chaos Theory shows. After some plantain-based sustenance, I waddled over to Wren and finally, after so long of knowing them and not seeing them, I actually got the chance to witness a seance from the disciples of Wren.

I don’t even know where to start but these guys absolutely stole the show for me. I completely lost my shit. Wren sound like a sentient piledriver, mechanically raining down crushing blows with effortless precision – each sound endowed with blunt force and a razor’s edge. They dance to the beat of desolation, one militant stomp at a time – each scream and bellow like the distant roar of thunder resonating through a valley, before it strikes again with another crack of the whip. Their set was an absolute show-stealer for me. It was completely in sync with me at the time, and I can seriously see these guys headlining festivals in the next few years – they’re just that fucking good.

After Wren, I was somewhat delirious so I went to Harrowed and just danced around; they were pretty good but my mind and what was formerly my heart were left figuratively splattered on the floor at Wren.

Casual Nun are always impressive; a barrage of swirling electronica and expansive psyche rock chaos. I always enjoy watching them but, between the booze and being blown away by Wren, I don’t recall the set very well aside from thinking it was fucking good. I always associate Casual Nun and Taman Shud together in my brain; I can’t think of one without the other. Maybe it’s a frequency of billing or the time that I discovered them or whatever, but they are definitely a great pairing. Taman Shud were fucking mesmerising: how the fuck does that dude drum and sing at the same time? It defies all logic. Their performance is astoundingly engrossing and ritualistic. I actually think they’re getting more spectacular each time I see them.

I left Taman Shud before the end to try and make my bandmates watch the last of their show but, when I got to the other stage, they were all fucked and sat in a circle on the floor, save for Rory who was trying to be somewhat responsible. Even with only two more bands to go, I knew I was in for some typically preposterous In Violet antics. Although, doing this review, I knew I couldn’t get too twisted otherwise I’d end up seeing through the bands rather than watching them, and those narcotically induced super powers can be somewhat damaging to an account of anything less than a three-day festival. Seriously, if you go to a three-day festival get as fucked as you want, you’ll still concisely cover the highlights. But with an all-dayer, it’s all-killer and no-filler; any more gaps and this review would end up like a set of dodgy teeth.

It was a tragedy that Sly and The Family Drone couldn’t make the event due to Matt being injured in a van accident – they’re such a fucking amazing band. Luckily, Adam Betts (Colossal Squid) of Three Trapped Tigers stepped in and provided some weird wonderfulness. It actually completely changed the whole atmosphere of the festival, in terms of its climax: dude sat at a kit, surrounded by the audience, and bashed out a seemingly timeless set of beat-driven electronica. In essence, it’s just watching someone who can really fucking playing the drums but, it’s taken to a point of absolute ridiculousness that’s heightened by his use of samples. The dude is fucking amazing.

Big Lad were seriously nuts; I have no idea where they were pulling that shit from. There was something incredible about the festival ending with a barrage of drums and electronics, like a robot melting down. The only downside to Big Lad’s set was that Wren just stole the fucking show for me; after them, the bar was through the fucking roof. It was fucking crazy, and watching Jake and Chrissy flying around in the pit was highly entertaining as well; the frenzy seem to get wilder and crazier until the set exploded at the end. It was an impressive conclusion to the night. With Big Lad finished, I quickly rounded up my bandmates and got those space cadets the fuck out of there.

The Chaos Theory all-dayer lived up to my expectations and more. Kunal might be a bit of a dork (I love you really, Kunal) but he’s one of the best promoters you’ll ever meet, and he can make a fucking good line-up. All the bands were excellent.  Let me just say one last time, Happy 8th Anniversary to the most RPG promotion in the world. Long Live Chaos Theory!