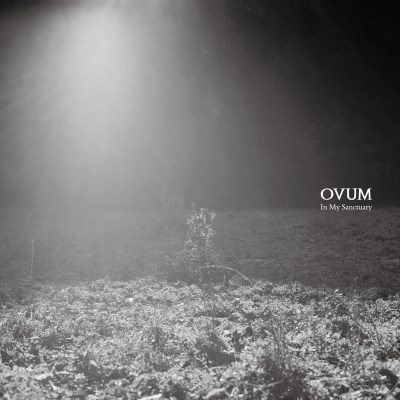 In My Sanctuary by OVUM

Ovum are a band that seems to be in flux. They seem to be searching for their sound. After their early albums produced rather bland post-rock, they continued to evolve. I thought they had found something very promising on their previous album Nostalgia. It brandished some impressive, heavy, instrumental, straight-forward post-rock. However, their new release In My Sanctuary has them still experimenting with their sound. In My Sanctuary blends Ovum’s powerful post-rock kick with the addition of a string quartet. I wasn’t sold on this sonic shift initially, but after a few listens, I found the addition of strings usually worked.

That said, as Nostalgia illustrated, I still think Ovum are at their best when they are bouncing up and down with changing tempos and melodies in full post-rock glory. The new album is bookended with two short strings only compositions entitled ‘Childhood’s End’ and ‘Still Longing’. Both are very sombre and bleak, I wouldn’t have missed them, as I don’t see how they relate to the rest of the material on the album. They seem more like a strange diversions than a part of the overall album and have a strange vibe when stacked against the rest of the mostly, rocking album. Here, less would have been more.

The album gets going with the second track ‘Sacrifice’. It’s a brooding and driving song that showcasing Ovum at their best, which is focusing on energetic, instrumental, metal-tinged, post-rock. Ovum knock out two more satisfying tracks with the groovy, soaring ‘The Age of Blue’ and the pensive and biting ‘Bloom in the Dark’. Both tracks clock in at over 7m and most of Ovum’s musical creativity works here as the band bridges together numerous sonic passages. Shin-ichi Tahara’s bass work and the dual guitar attack from Norikazu Chiba and Yosuke Jinnouchi build some gripping sections of music that are anchored by Yu Tokuda’s stalwart percussive momentum.

Ovum included a slightly trimmed down version of the song “Nostalgia” which appeared on their previous album. It fits in well with the other new post-rock material on In My Sanctuary. Until the track ‘Resignation’, the string tracks were kept separate from the post-rock tracks, but here they merge. Ovum starts the track with the sound of waves crashing as guitar and strings gently wash over the mix. It is quite a serene, almost tranquil track until midway, the drums and guitar storm in for a brief climactic ending. The rock instruments really cut through the tone and atmosphere of the track and feel forced, awkward dropping in so suddenly. By contrast, the closing track ‘The Light Illuminates My Heart’ finally showcases a balanced merger of modern and classic sounds. It is a sprawling 12m post-rock ramble in which strings and heavy guitar work off each other echoing melodies propelling the dramatic track forward. The song ends with a triumphant swelling of sounds.

Ovum took a risk diverting from the sound they found on their last album Nostalgia. While the results of their experimentation with a string quartet are rather mixed on In My Sanctuary, when it works, on ‘The Light illuminates My heart’ for example, it  does work quite well. There is unquestionably potential in this sonic merger if Ovum can continue to find a suitable balance of sounds. Still, however, I found the best tracks on this album are the tracks without strings: ‘The Age of Blue’, ‘Bloom in the Dark’ and ‘Sacrifice’. The album offers some great new material from Ovum but certainly complicates the question of what musical direction they will take in the future.