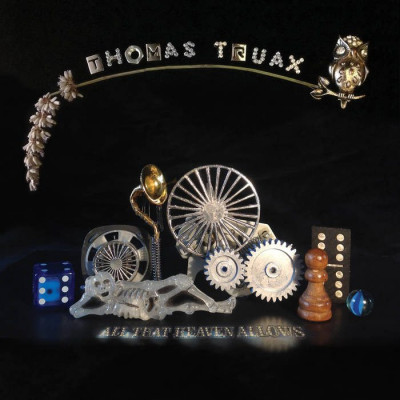 All That Heaven Allows by Thomas Truax

Slicker production and a fuller sound than any previous Thomas Truax album this is also his most ambitious record to date. A clever and twisted song writer and one of the most engaging live solo performers you are likely to witness. His ‘band’ is made of various mechanically and interactive instruments such as Mother Superior, The Hornicator and The Stringaling all of which Truax has designed and made himself. To see him perform with his ‘band’ is to witness the true definition of performance art. It is always an inspiration and pleasure to see him live and his does this relentlessly around the UK and Europe. Check his website for his latest touring schedule.

He creates songs very much in the vein of Tom Waites and David Lynch (Truax has previously recorded an album of songs from David Lynch films). On ‘All That Heaven Allows’ opening song ‘Swimming back to Wowtown’ is probably as catchy and commercial as Thomas Truax gets and with its Wowtown nod back to live favourite ‘Full Moon Over Wowtown’ from his debut album back in 2002. ‘Little Bites’ is a beautifully twisted piece of spacious music that slow creeps into overlaid guitar loops and mutant country blues that suggests the beginning of a horror B-movie soundtrack. ‘International Homeland Security’ sounds like a one man band playing a lo-fi Stooges song a simplistic primal beat with fuzz guitar.  “If war were a woman it would be different” the fantastic opening line of song ‘Tonight We’re Gonna Fly’ spoken over reverb clicks echoed beats lurches into something chirpier but equally abstract.

New comers to Thomas Truax need to know what they are getting themselves in for. He is a solo artists/ perfomer but nothing like you’ve heard or seen before. Twisted lyrics about worlds that we can only glimpse at from the corners of our tired eyes. Storytelling and characters that don’t make sense in any other world other than Truax’s but it is not an exclusive world he creates, he genuinely wants to share. He wants us to access his world. “Promise us that death is just a door” on ‘Save Me (reprise)’ helps us into his mindset. His music is a door to other space, dark at times but not meant to scare.

Often referred to as a Steampunk musician with Gothic undertones I don’t feel this does him the justice he uniqueness deserves. Bizarricana is a more fitting title. These songs deserve your attention you need to concentrate this is not background incidental distraction music this is something earthly, simplistic and repetitive in sound yet alien, lunar and other worldly in concept. Interestingly his previous jobs have included working as an animator on MTV’s celebrity death match and the Cartoon Networks Robot Chicken.

‘Just a floater on the surface of the tide’ is a silly flippant end lyric of the album but sung with such sincerity that it has meaning and depth. To understand this album fully you need to see the man perform it, the lyrics will not make any more sense but you will have a great night out and witness one of the greatest trubadors on the planet.