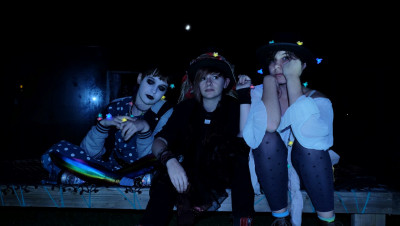 "Musically we mainly draw on pieces of art and personal experience as well as some messages that we want to express to our audience."

It’s not often I get excited messages from E&D’s Editor telling me to check out a band so when it happens it’s worth taking seriously! The band in question was <track not found> and the advice to check them out was sound, as you’d expect! <track not found>, who are based in Guernsey, have only been going since 2016 but in late 2017 released an EP The Only Way Is Lost, which is three tracks of intense, masterful rock that is dramatic and visceral, without ever being overblown, and draws on a wide range of musical resources without ever sounding derivative. The EP starts gently enough with the intro to ‘Code Red’ before the song metamorphosizes into a full on metal tinged rocker with a vocal that borders on harrowing at times! There is a nice change of texture for both ‘Saint Tears’ (which includes a really nice guitar break) and ‘Ecstasy’ giving the impression that a Track Not Found album would be a very good thing indeed! Great debut EP! In fact so impressive an interview seemed like a good idea and I contacted Emma Thomas (drums and vocals), Grace Taylor (guitar and vocals) and Maisie Bisson (bass and vocals) to find out a bit more about <track not found>.

We found each other at an under 18s live music event (sound.gg) in February 2016. Emma was playing with her old band The Bone Idols (who don’t exist anymore, after Emma quit to join <track not found>) and we quickly bonded over a shared music taste. A couple of months later we started rehearsing in Emma’s living room with the drum kit and amps in the corner.

We’re all school kids in years 11 and 12 and we’re definitely the ‘kool kids’ (aha not really, at school no one really talks about the band). Being young we used to struggle getting adult gigs but we’re slowly trying to bridge the gap between adults and teens in music.

(((o))): And then within two years you put out the ridiculously good 3 track EP The Only Way Is Lost! It’s had really positive responses, including from an E&D Editor who put me on to you! How did your sound come about, did you have an idea of what you wanted to do from the start or did it gradually emerge?

Thanks we’re glad you enjoy it! We never made a conscious decision on what genre we were going to be, the original plan was just to play songs that we liked and were fun to play. In fact the first cover we were going to learn was ‘Sunshine of Your Love’ by Cream, although the first that actually stuck was ‘Little Monster’ by Royal Blood. We have now dropped all covers apart from ‘Bath Salts’ by Highly Suspect but are considering relearning ‘Little Monster’ for the memories. Writing originals really helped us develop our style more and get our sound to a place that we are happy with, so our music really has been formed gradually and changes slightly with every gig we do.

(((o))): How would you describe your sound – people seem to be struggling to put a label on you!?

To be honest, we also struggle to put a name to it… It’s a bit of everything really; grungy, screamo, rock, blues, and some other stuff.

(((o))): Who would you admit to as influences? Bizarrely the intro to ‘Code Red’ reminded me of early Genesis!!

We have been asked about this so many times and each time the list of influences just gets longer, mainly we just draw influence from our favourite bands. The list goes a bit like this; Jack White, Placebo, Muse, Royal Blood, Dresden Dolls, Ghost, Highly Suspect, Nirvana, David Bowie, Bat For Lashes, Stitched up Heart and a great band from Guernsey called Static Alice. Surprisingly people often compare us to bands that we haven’t listened to much, so we may have been influenced by some other bands subconsciously.

Hmmm, we’d probably not be that quick to say that we take influence from My Chemical Romance (we are all true emos at heart), Die Antwoord and ‘Toxic’ by Britney Spears. We are the first to say that our music tastes are all over the place but what’s the point in restricting yourself when there is so much great music out there. If you wanna have a look at more of our influences that we aren’t as open about take a look at our playlist on spotify – (https://open.spotify.com/user/finding_the_tracks/playlist/28uBGVkanJA2w6dbMdRfGb)

(((o))): I noticed that you’ve already played about 20 gigs in just 18 months – has that been mostly on Guernsey or further afield as well? What is the music scene like in Guernsey?

So far we’ve only ever played in Guernsey with our first gig off island in Jersey on the 17th of February. But this hasn’t stopped us from loving the gigs we’ve done. The Guernsey music scene is so great, everyone knows everyone and it is such a friendly supportive environment. We have found some of our tightest friends through the music scene and have met so many amazing people at gigs. Despite most gigs being strictly over 18 there is a monthly under 18s live music night put on by Sound Guernsey that has given us great gigs and opportunities.

However, our best memories are from the festivals and the summers that we’ve spent together. Chaos festival last year was a massive turning point for the band when we felt really passionate about music and the scene. The one downside about being a part of the scene over here is how hard it is to play gigs in the UK and get your name out there, it’s a real shame because there are so many great bands that are stuck on our little rock. Other than that, we love being part of the community over here and have always felt supported and at home.

(((o))): How does a song come about in <track not found>? Is it very collaborative or is there one main songwriter? Does it start with music or lyrics?

All of the above really, usually Grace writes something on her acoustic guitar and shows it to the band, we start working on it and from there it becomes a finished song. Usually it starts with a riff but sometimes with lyrics, but then again some songs have just come from messing about and band practice (these tend to be heavier and slightly looser). We all have an important part in shaping how our songs sound and we really enjoy the songwriting process.

(((o))): And what sort of things do you draw on in songwriting and performance? Books, films, personal experience?

Our stage style acts as a big part of our performance – visually we’re inspired by tank girl and riot grrrl styles, as well as inspiration taken from Instagram, people like Casper Blaise, we buy a lot of our clothes from charity shops. Musically we mainly draw on pieces of art and personal experience as well as some messages that we want to express to our audience.

(((o))): Could you talk us through ‘Code Red’, ‘Ecstasy’ and ‘Saint Tears’- what sort of subject matter are you exploring in the different tracks?

For this question it’s probably best to hand over to Grace as all three songs on the EP started off with Grace and her acoustic guitar. So in Grace’s words;

‘Saint Tears’ is told in third person like a story or concept that I thought of. Basically it’s just because we wanted a really ‘nice’ song, the main message in it is ‘I don’t care what anyone thinks’.

‘Code Red’ is all emotions, I was ‘in a dark place’ when I wrote this one and it means a lot to the band.

‘Ecstasy’ was written in 2016, the breakdown was kinda dubstep inspired. The subject matter of ‘Ecstasy’ isn’t much, just edgy lyrics, I can’t really remember what I was thinking when I wrote it.

You can listen to the EP on Spotify, Bandcamp, Soundcloud, Youtube, Amazon and ITunes soon or you can buy a physical copy on our website www.tracknotfound.com and we’ll send it through the post. 🙂

(((o))): What bands and books have you been enjoying lately, any favourite writers?

We are always listening to different bands but to list a couple that are at the top of our playlists at the moment: Mother Mother, Kate Bush, Meds by Placebo and the new music that Jack White is putting out. We are also listening to a fair bit of popular 70s rock and disco (especially the legendary Bee Gees) to help us get through the winter. Book wise Maisie reads the most, at the moment she is working her way through the Scott Pilgrim graphic novels and won’t shut up about them!

(((o))): What are your plans for 2018? Any more releases planned, and perhaps most importantly when can we all get  to see you live!?

We are very excited for 2018 and have big plans for later this year, including a full length album, many more (perhaps more experimental) songs, developing our stage presence and look more, and plenty of gigs. Probably the most exciting plan for this year is our two and a bit weeks that we will spend in summer touring England! So far we have a couple of dates confirmed including one night at The Finsbury in London. For more information about where you can see us have a look at our website, Facebook and Twitter where we’ll update you on where and when we have gigs.