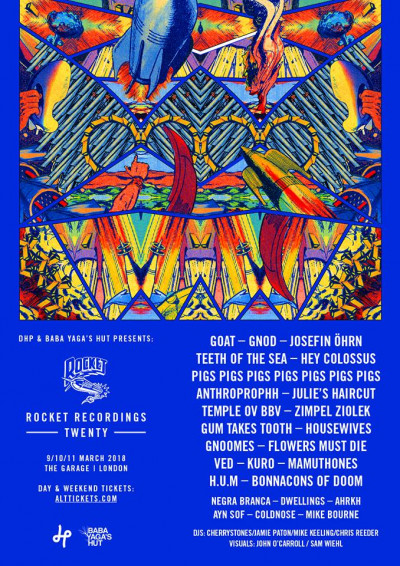 We knew this weekend was going to be fucking ridiculous but, seriously, it was absolutely fucking unreal. Each band was bringing their best and defying expectation. Each new signee delivered emphatically and the old favourites upon whom the label was built reached new pinnacles that at times were totally unfathomable to me. Dan (Salter), my brother Jake & I ventured out to Rocket 20 as the three most warped creatures in the Echoes & Dust team and somehow returned even weirder.

We arrived to a queue outside The Garage so long that I thought it was the smoking area at first. Anticipation built and we thought that we were missing Flowers Must Die but, we managed to catch their set in the end. When we first arrived I didn’t actually realise who was playing because the band had mutated their sound into a more Rocket-esque gloomy take on their more-well known twang.

After Flowers Must Die we took our first peak upstairs to watch AHRKR’s set; it turns out that unbeknownst to me, this was to be the first of five Gnod sets this weekend, with Alex Macarte flying solo for this one. Arkhr’s set was a kind of spiritualistic lopped voice, ambient electronica made even more sedate by burning incense.

Julie’s Haircut were probably the underdogs of the whole festival, none of us expected them to be one of the top bands of the weekend but, they really were and heralded one of the themes of the weekend; the rescuing of saxophones from 80s smooth jazz hell and repurposing them as a deadly weapon of psychedelia. We are fans of this.

Before Dwellings, I bumped into Marlene and Paddy from Gnod, Paddy had lost his voice and was trying to get some stuff to help his throat en route to Chris’s set. A huge spanner in the works but, I was pretty certain that he’d find a way to power through. Dwellings aka Chris Haslam (Gnod) delivered the sophomore Gnoding of the weekend doing the collective proud with a barrage of wacked-out electronics.

It was cool to watch Josefin Ohrn + The Liberation, I work with Patrick and Luke and it was cool to see them in action for the first time. It was quite a surreal experience watching this band, almost dreamlike. By this point, I was quite drunk so, it’s hard to remember what they were like in great detail but, I thought they were good in any case.

I was a bit nervous going into Temple Ov BBV (Radar Men From The Moon & Gnod), I’d never seen them before and I was wondering how Paddy’s runaway voice would affect the performance. The set began like roaring thunder, apocalyptic aggression and brutality splintering away from the instruments. When Paddy finally started to sing, the damage to his voice created a whole new atmosphere in the music, one that was savage and scornful, yet, frail and desolate. Full of reproach and driven to punish, Temple Ov BBV began Saturday with one of the most ferocious and captivating performances of the weekend and it was so fucking satisfying to see it go so well on what as far as I know was the first London show for the ensemble.

I think we watched MAMUTHONES next, I don’t really remember what happened, I think I probably started drinking at this point. I recall watching GNOOMES around this time, they were fucking great. Tschak is still one of my go-to albums a year later.

Jake and Dan had a feeling VED were gonna be special so we made a tough choice and skipped Hey Colossus on this occasion. Despite their usually questionable to intuition they were actually right. VED were probably the biggest surprise of the whole festival and despite not being one of the bands I was originally itching to see, they ended up being one of my favourites of the weekend.

I was fucking flying by time Goat game on, actually subsiding on beer donations from Yuce (Gum Takeds Tooth) and Patrick (Josefin Ohrin + The Liberation). I had never seen Goat before. I felt like I was in that gloriously weird afterlife in Pan’s Labyrinth, it was fucking sick. I was kind of expecting all the hype to ruin Goat for me but, it didn’t. I thought they were actually phenomenal and I’m really glad that I was fucked because it was absolutely incredible.

Gum Takes Tooth closed out the night with their trademark gremlin bangers. I fucking love these guys. They’ve been a part of several of my favourite gigs ever, the first at ArcTanGent 2015 which was fucking amazing and the second being Bad Guys last ever show which was absolutely decimating. I also got paid to watch them at The Lexington for my first ever shift as the barback there, which was the fucking icing on the cake. And their performance at Rocket 20 pushed that high standard into a new stratosphere. It was insane. Every band seemed to be bringing it and pushing the boat out with due respect to the occasion. Saturday was gonna be hard to top but, Sunday even on paper was fucking stacked.

I awoke Sunday on a massive comedown, it took me hours to peel myself out of bed; I was an absolute fucking husk. Jake spatulared me up off my coach at about 2pm and we went off to meet Dan in Wetherspoons, I sat there fucked for ages playing Kirby’s Dreamland on a Gameboy Advance, ate about three quarters of a meal and then skulked to the show. It was very much the morning after…

I’d seen the name Bonnacons of Doom on a lot of good line-ups over the past year so, I had a feeling I was gonna enjoy them and you know what? They aren’t half-bad for a band of people with resonators for faces! Of course, a large part of their allure is their amazing lead vocalist whose name I don’t know (Kate Smith- Ed.) but, Jake asserts that she was formerly the singer for Capac. Capac are fucking great. Overall, I was glad to see Bonnacons of Doom deliver on the hype, really looking forward to their first release now.

We watched Kuro for a bit but, the group consensus was that if we weren’t so fucked from the night before we’d probably enjoy it. But, I was human wreckage so, instead we waited for Ayn Sof to start upstairs. If you’re unaware, Ayn Sof is a side-project for Paddy Shine bringing the fourth Gnod performance of the weekend and also featured at least one Bonnacon of Doom . It was exactly what we needed. Midway through the set, I was sat wearing sunglasses with my eyes closed and Jake alerts me of some shit going down at the front of the seated crowd. Paddy crawling his way through the largely seated audience hugging everyone and asking how they’re doing. That hug brought me back from an intense comedown. Everyone’s going from nihilist memes to wholesome memes now and I love it. Another fucking great set from the Gnod Gnetwork.

After that, I was ready to take a trip so, I rolled the dice and hoped Zimple Zolek was gonna be pleasant to me during take off. Naturally, it did. I have no idea who the fuck these guys are but, what I saw was fucking great. A wondrous set of cosmic space jazz. Hopefully, these guys’ll be joining the Rocket family soon so, we can see more from them.

Speaking of the Rocket family, I was highly anticipating seeing Anthroprophh for the first time at the festival; featuring Gareth & Jesse from Big Naturals and the legend that is Paul Allen; a member of The Heads, the band that essentially spawned Rocket Recording and are well integrated into the lifeblood of the label. Their releases over the past five years have been some of Rockets finest and they, alongside Goat, Teeth of The Sea and Gnod, have arguably been the foundation of the label that we see today. They smashed out a ferocious set of gnarly psych. Absolute filth.

I don’t know what we did next, I think we ambled around and got some more beers and just stood around sheepishly waiting for Teeth of The Sea to start. Teeth of The Sea came out and shattered the walls of reality. I’m sure we’re all agreed that if the night had end with Teeth of The Sea, that would’ve been more than enough. It was hard to fathom, how one band could be so mind-bendingly spectacular and just when you think it’s all over, they fucking bring out ‘Reaper’. Suffice to say, we were fucking soup. They’re fucking genius. For years, Teeth of The Sea have been one of the greatest mainstays of Rocket Recordings. The label gave the world their first opus Orphaned by The Ocean back in 2009 and has benefited them as a solid bedrock for the label ever since. They were one of the first Rocket bands I fell in love with and have produced nothing but, absolute gold ever since. Teeth of The Sea were crucial to Rocket’s past, an absolute treasure to behold in the present and will no doubt be an exciting part of the label’s future; I’m itching for that new album already.

At one point Jake and Dan were kicking around this notion that this festival was essentially a fuck load of great bands building up to Gnod. To me, Gnod are the most vital band on the planet. Everything they’re doing is what an ideal band would in my mind do. They have become one of my foremost favourite bands and therefore, it should come to no surprise, given the unbelievably high bar that every band raised to this weekend, Gnod’s performance at Rocket 20 was literally the best thing I’ve ever seen in my entire life.

Not just the best musical performance, just the best of everything I’ve witnessed in my time on earth. I don’t even know how to describe it. My brain seemed to rupture into bits, like my serotonin was erupting into a burning mass of energy. From the inaugural performance of ‘Donovan’s Daughter’ through to the rendition of ‘Bodies For Money’ straight out of the realm of the forms, it was too much to ever process for me. Trails echoed off the band. The lights cascaded down like rain made from hallucinogenic laser beams. The sound system and engineering (Andy is responsible for the fact that every time you see Gnod they sound fucking great) were completely stupefying. It felt like the mothership had came to take my home and I stood in the ether of that moment in completely dazzling bliss like a wonky deer tripping in the headlights. Absolute euphoria. It was unfathomably, indescribably, ineffably superb. The best thing I’ve ever seen in my life; a fitting close to a fucking fantastic festival.

Thanks to Rocket for twenty years of excellent music releases, to Anthony from Baba Yaga for hosting and also for letting me play Oneida’s ‘Each One Teach One’ through The Garage’s sound system, that was an awesome moment. And naturally, all of the bands and the venue. After the gig, Jake, Dan and I sat for a good while in the drizzle somewhere round the corner from the venue trying to figure out what the fuck just happened but, I still haven’t…and the madness has just begun.