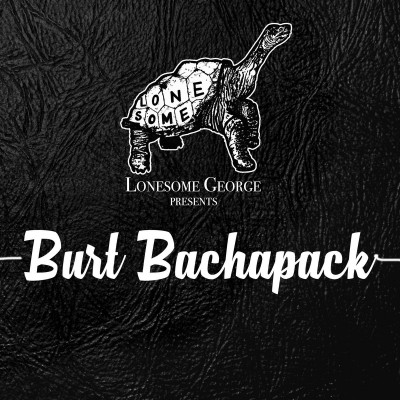 Let’s start with this: This album is GOOD. And its appeal is not only for hip-hop listeners. Go put it on now, while you’re reading.

“Lonesome George” was the name given to the only remaining Pinta Island tortoise, who spent the last 40+ of his lengthy years without the company of his own species. Introduced feral goats devoured every scrap of the island’s green browse. The goats have since been exterminated, but the tortoises are gone. Parallels to human indigenous communities are inescapable.

Released deliberately on U.S. Thanksgiving Day, 2017, with the taglines “Indigenous music by and for indigenous people” and “#RuinDinner,” Burt Bachapack seems intended to variously provoke and connect. The album succeeds at both — but Lonesome George takes a step beyond expressly political music, creating a musically compelling album that will draw in listeners who might not otherwise be ready to hear the message they carry.

That said, let’s not ignore the bite here. Rapper Animal Teef is Oglala-Lakota from the Pine Ridge Indian Reservation in South Dakota; musician/producer ENDOR is Nahua from Los Angeles. Indigenous groups in the Americas have battled constant oppression from colonizers and have endured centuries of theft and destruction. The album blasts open with ‘Burt’: “Hey you – yeah, you. Wherever you live and wherever you stand in the U.S.A., it’s on indigenous land, then there’s Canada, Mexico, Mesoamerica — whole Western hemisphere — wašíču terrorists desecrate the sacred in their arrogance; ongoing crime since 1 4 9 2…” Lonesome George has made an effort not to pull their punches here, and the attentive listener will either feel a sense of brother/sisterhood or have their assumptions/privilege shaken up: no bad thing. “Too late now, we’re not scared: we were born targets,” they warn on the pipeline-themed ‘Black Hills El Dorado’.

Animal Teef cites Biggs, a rapper from Sioux City, IA, as his most important rap mentor; we can thank him that Teef is a rapper at all. Animal Teef has previously released solo hip-hop albums and singles, working with various producers, but this collaboration highlights some of his finest chops yet. His flow is rhythmically varied and textural: no two songs sound alike. Lyrics are sharp, funny and unsparing. Teef’s voice dives in and out of ENDOR’s electronic background, now a lead vocal, now a percussion section, blurring the lines between traditional rap and electronic music. Production is impressive; there is shape to the dynamics (all too seldom heard on indie releases) and restraint on the effects. The whispered “Bang” at the end of ‘John Dunbar’ knocks us as flat as a pistol. Careful use of vocal doubling adds punch without overuse. Everything on the album feels well thought out, and when asked, the two agree that the greatest challenge in making the album was the careful consideration put into every aspect, “down to individual drum choices and single words in bars of lyrics. From the ground up, really nothing was done idly. Applying that consideration to every single moment of music was exhausting but worth it.”

ENDOR demonstrates a dazzling breadth of musicianship. Sounds range from the jazzy tones of ‘Neutrality,’ with its nod-and-wink lyrics — “Everybody wanna be indigenous, until it’s time to have diabetes,” it begins — to the winding Latin lead-in to the album’s cornerstone, ‘Bury My Heart at CC Yards’, which blends somehow perfectly into a backdrop of horror-movie flute/piano. Lonesome George wields humor as a weapon, skewering targets with clips of their own words (as on ‘Cheap Heat’) and wickedly snarky asides (“How’s that empire coming?” on ‘Black Hills El Dorado’). They lighten tense realities with synth patches ranging from ‘70s prog rock to both classical and yacht rock woodwinds to elevator vibraphone.

‘Erry Erry Day’ starts with lounge vibes and closes the album in a prog/nearly Reichian synth/bass repeat, an elevator ascending from the depths of an ancient Holiday Inn to sparkling, rain-drenched clouds above. And that’s where Burt Bachapack takes us in the end. If there’s justifiable anger, biting humor and thoughtful criticism here, there’s also music that we can’t stop listening to. Lonesome George Presents Burt Bachapack leaves us soaring above the clouds with a warning: #RuinDinner. Have that difficult conversation. Ignore this at the peril of us all.