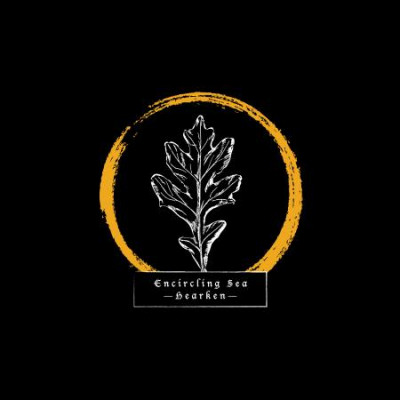 Encircling Sea has been making music for quite a few years now. The Australian band is a trio led by Robert Allen with Matt Radford and Dave Byrne. Over that time, with each successive release, the band has refined their sound. I can certainly appreciate the sprawling experimentation of their 37 and 48 minute epics from their earlier material. However, with the band’s new release entitled Hearken, all of their tracks clock in at under 11 minutes. This is tidy and succinct by Encircling Sea standards, and much more palatable for the listener to engage with.

The band’s last album, the mesmerizing A Forgotten Land illustrated the band’s impressive ability to shift between musical genres. This blurring continues on Hearken. I found the new album has less ambient passages and more straight-forward, gut-punching, aggressive metal. This is echoed by the lead singer in an interview with Heavy, Allen said “Musically there is quite a contrast between ‘A Forgotten Land’ which is more neofolk, atmospheric and progressive but heavy and ‘Hearken’ which is thicker, and this intense combination of blackened sludge, post-rock and doom.” Indeed, black metal, post-metal and doom courses throughout the album’s grim veins. Like the dramatic changing of seasons, the album capably expresses a diverse range of tones and sonic atmospheres. They range from the lush, gentle and beautiful to exigent and gruesome.

The album’s vocals are primarily delivered with Allen’s long, pained growls. Many words are drawn out, as each syllable is elongated and languished upon, with his burning, raspy, ferocity. I enjoy some diversity in my singing and Encircling Sea offers some intriguing vocal options. There is a stunning section in the doomy track ‘Kinsoil’ that slows down and is graced with the soft, angelic vocals of Allen’s wife, Ramanee King. The vocal juxtaposition from one extreme to the other is enchanting. It is like changing from the howl of Winter’s bitter winds to the warmth of the Summer Sun, in a single day. Throughout the album there are also some subtle, but highly effective uses of vocal echoes and sonic effects to break up the sameness of the weighty, punishing growl.

Musically the band sounds focused and adept. The songs are creative, well written and flow quite unencumbered throughout the album’s ~50m runtime. There is attention paid to crafting enticing melodies, clever musical passages and pummeling riffs. The album has some crushing, heavy tracks like the gloomy, plodding ‘Elderfire’ that roars “We’ll worship our kin/Their spirits aflame!”. ‘Sunhelm’ also surges with stormy intensity, often threatening to come unhinged with its frantic pace and smothering atmosphere. “Rise!”. The band can also shift down a gear into a more pensive, ponderous pace, as shown with the smoky, shimmering post-rock vibe that opens the album’s killer track ‘Bloodstone’. The musicianship is consistently arresting, track to track. The drums on the track ‘Everoak’, are often thunderously concussive and sound like the fury of a thousand helicopters landing simultaneously. Many tracks are fleshed out with subtle synth lingering in mix, this adds to the haunting atmosphere found on this album. I suspect this album’s material would kick ass live.

The album’s themes “pay attention to those who came before us – to their failures, triumphs, and the ritualistic junctures that defined the spiritual growth of humanity. The roots run deeply from both the trees into the earth, and from man into the fading pages of history.” This is echoed in the lyrics from ‘Kinsoil’: “Our roots reach across generations / Through blood and spirit/ The connections flow / … Our hearts are in these forests / These rivers, these stones / And all throughout these valleys / Rejoice in the Truth of home”. The words reflect on ritual, nature, spirituality, ancestry and our bonds to these omnipresent entities and how they can shape our present in a meaningful way.

It has been a few years since Encircling Sea’s last album. I believe the wait was well worth it. The band has created an incredibly visceral, bountifully dark, complete album with Hearken. The album hones the band’s sound into a well focused, driving, metal behemoth that showcases a robust range of sonic emotions, atmospheres and musical creativity. This album is an unexpected gem that resonates deeply on many levels.

Encircling Sea offer respect to what has influenced their past to shape their present and future. “Onwards, from time immemorial/Ever may it be known!” – ‘Kinsoil’