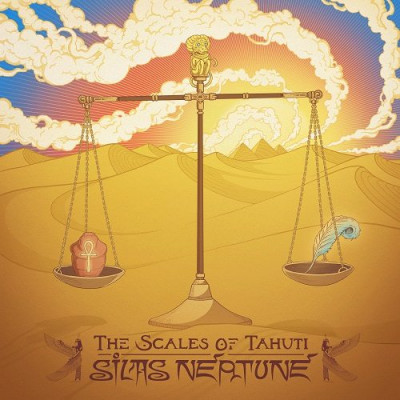 The Scales Of Tahuti by Silas Neptune

Silas Neptune is the alias of Silas Wynne, son of Ed Wynne – a name that will carry a great deal of significance to devotees of legendary space rock band Ozric Tentacles, whose thirty-plus year career – and counting – has expanded more than minds than most. Ed, a musical polymath if ever there was one, is the sole remaining original member of Ozric Tentacles and its creative guide. Silas, a chip off the old block to be sure, joined the Ozrics fold himself in 2009, and has featured on the band’s three most recent albums, displaying the same ample musical gifts that seem to run in his family’s genes. The Scales Of Tahuti is Silas’ first solo album, and on the basis of its contents it seems the future of the Ozrics legacy is in very safe hands.

For existing Ozrics fans, Tahuti will feel immediately familiar, partly because musically it’s very much in the same wheelhouse, and partly because Silas has sensibly employed members of the Ozrics past and present to play on the album. It’s a testament to Silas’ musical vision that the presence of the assorted Ozrics alumni never overwhelms the record or turns it into an Ozric Tentacles record. For despite all the similarities to his father’s much-feted band, The Scales Of Tahuti manages to carve out its own identity. The typical ingredients of an Ozric Tentacles record – swirling keys, dazzling guitar, ethnic flourishes and undercurrents of electronica – are all there, but the album integrates them somewhat differently. The electronic elements are much more to the fore here, the drumming often supplanted completely by a distinct trance-like pulse; the result lies somewhere between the frenetic rock drumming that underpins Ozric Tentacles and the steady momentum of dance pioneer Banco de Gaia. Overlaid on this solid rhythmic bedrock is a mesmerizing landscape that effortlessly evokes the blazing sun and shifting sands of Egypt featured in the sleeve art.

Opening track ‘Feathers Of Ma’at’ shifts effortlessly from New Age languour to mesmerizing Eastern groove, before taking a slightly darker route and evaporating into thin air; it’s a strong statement of intent, but any concerns that the album would rely on this kind of template are soon dismissed by the spiralling synthesizers of ‘Aqualight’, bent into new and intriguing shapes with dancefloor-friendly stutter edits and accompanied by cavernous electronic bass, the euphoric techno-infused headlong charge of ‘Devachan/Sand Goblins’, and the frenetic ‘Become Everything’. There’s a lot of great music to enjoy here – sixty five minutes for anyone who is counting –  and by the time the aptly-named ‘Gateway To Dreamtime’ shimmers into the middle distance, your skull will be well and truly lulled.

The Gates Of Tahuti is a richly atmospheric and very welcome addition to the ever-expanding and suspiciously aromatic cloud of Ozric Tentacles-related releases, but it’s also a hugely enjoyable demonstration of Silas Neptune’s prodigious talents. With Neptune talking openly about working on more new music of his own, and continuing to make a vital contribution to Ozric Tentacles’ music, it looks like we can expect a lot more where this record came from, which is joyous news indeed. In the meantime, treat your ears to a magic carpet ride with Silas Neptune.