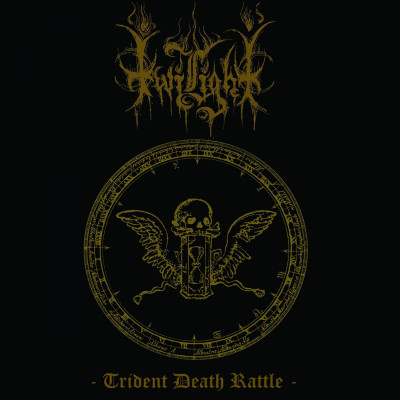 Four years after the release of their last album, III: Beneath Trident’s Tomb, the black metal super-group, Twilight have released what they’ve said is to be their final recording Trident Death Rattle. An extended player with tracks drawn from the III: Beneath Trident’s Tomb LP sessions, Trident Death Rattle features the return of the most recent incarnation of the band, who over their duration have seen numerous member come and go, including ISIS stalwart Aaron Turner and Scott Connor of Xasthur. One of the most intriguing, recent additions to the line-up has been Thurston Moore of the seminal noise-rock outfit Sonic Youth. Curiously from the interviews with guitarist Blake Judd, it’s Moore’s influence which was said to have had, one of the greatest impacts on the record, serving as both an inspiration to Judd as well as providing assistance with the writing process, which going by Judd’s words was anything but smooth.

The final track, ‘No Consequence’ leads with the layered wintry guitar melodies,  pummeling blast-beats and perhaps unexpectedly guest Scott Judd’s banjo, whilst Jameson, contributes a coruscating vocal accompaniment. There’s a slight change of pace throughout the latter half of the track as the band slip into something akin to a post-metal breakdown, and other vocals emerge before the blistering blast-beats reenter the melee to drive the track towards its bitter conclusion.

Whilst ‘Trident Death Rattle’ is a fitting swan song for the group, the three tracks they’ve produced being among their most expansive experimental work, it’s also perhaps slightly bittersweet given the fact that it’s a reminder of the band’s current state of nonexistence. Still, there are worse ways to call time on a project than an EP, that bucks convention, evading many of the regular black metal tropes, in favour of something dark, powerful and hypnotic and a timely reminder of just how creative and ingenious the US black metal scene can be.