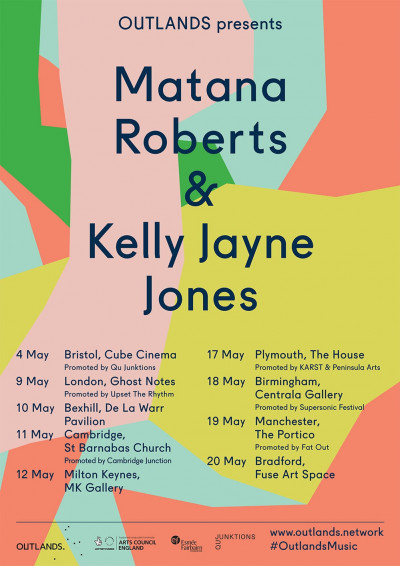 Climbing the stairs towards Ghost Notes, part of Peckham Levels, is like ascending into hipster heaven. The venue sits within a complex that’s marginal enough to avoid mainstream attention, but offers studio spaces, eateries and more, with Ghost Notes surely the jewel in the crown. The following evening, Tony Allen and Amp Fiddler are set to play together live at the venue, and there’s a similarly collaborative flavour to this evening’s bill.

The Chicago born sonic artist and saxophonist Matana Roberts is advertised as headliner, but this evening shares the stage with the Manchester based Kelly-Jayne Jones, who shares her passion for multi-disciplinary but accessible performance-based work. Before this duo take to the stage, Coby Sey provides a support slot that shows willingness to experiment with club sounds, music concrete, noise and more. Saxes emerge as a theme, alongside collaborations. A three-piece this evening, joined by alto and tenor saxophonists, the DJ’s early sculpted drones are accompanied by his vocal refrain “trying to turn vital”.

The saxophones add wildly improvised punctuation as the intensity is ratcheted up, before both wind players turn to their on-stage mixers, looping devices, and digital audio workstation Ableton Live. The first Thameslink train to pass outside is drowned out by the trio’s noises. A second is more accurately represented sonically, as rhythm becomes the force driving the music forwards. Sey adds bass guitar ensuring each performer contributes both instrumental and processed parts to the heady sonic stew. The results are a psychedelic, industrial, free-jazz blend that’s instinctively primal and intellectually stimulating at once.

The introduction of a thudding kick allows some space to enter the mix, and Sey moves from his earlier repeated vocal style to a more expansive rapping, his subject matter more activist than conscious. It’s in keeping with the rest of the presentation: music this direct and grimy presents art as active, rather than passive, and as the din dies down, it’s clear Sey is a talented vocalist.

Reverb and distortion, the twin pillars around which much noisy improvised music is built, are present and correct during Sey’s turn, but are used creatively, Sey’s beats keeping feet tapping throughout. Sey plays with his word order as the trio pile sounds on top of each other, creating a claustrophobic effect in the low-ceilinged venue. Raspy alto is joined by sandpaper tenor sax. At one point, both saxes play in rhythmic unison. For the remainder of the set, either one plays rhythmic patterns whilst the other solos, or both play freely. It’s this final combination that provides the greatest chaos and arguably the set’s high points.

Underneath the wind instruments, the beats gather pace and give the impression of techno and finally footwork. The trio claim that the performance is entirely improvised, but with Sey dropping tracks from his back catalogue such as ‘All Change’, some rhythmic motifs are emphasised by the soloists with such assurance as to suggest segments are semi-rehearsed. Regardless, the method is not what’s important, it’s the impression that’s created. This is music that sets its own agenda.

Matana Roberts, and Kelly-Jayne Jones’ performance is more measured. Their primary medium this evening is text performance, and this is delivered as a “fictional autobiography”, with both Roberts and Jones reciting passages, often overlaid, cut up and repeated. The confessional tone ensures language becomes the key to the set, and whilst some of the themes are universal, those familiar with Roberts’ Coin Coin project will recognise recurring motifs in her work, relating to memory, history, the boundaries of the personal and the interface with the political. “The scum of the world cannot be divorced from myself or my body” is one striking example of the way language is employed by the duo. The piece is original, and unpredictable, structurally, self-referencing “a play that is infinite rehearsal”.

It’s a while before Roberts, headphones perched on her headscarf, begins to play saxophone. She plays in fragmented bursts, hardly referencing the bedrock of stuttering rhythms underneath. Jones adds flute to the textural soundscape that also contains random interjections of sounds, each momentarily changing the aesthetic and creating an intentional jar with the narrative. The synth tones used progressively as the piece unfolds recall Ligeti’s use of micropolyphony. For the second time this evening, the artists have considered space as an important component of their sound, allowing each of the contributant elements to be assessed individually.

The coda features acoustic wind and a final text sign-off, a call to break the mould. With this piece set to organically evolve over the duration of the tour, the rallying cry from the stage is all the more compelling for its relation to the performance itself. Challenging and confrontational in its empowering aims, Roberts and Jones’ set does not connect with the crowd in quite the same way as Sey’s earlier turn, but both performances are warmly greeted by the audience appreciative of such forward thinking music. Promoters, Upset The Rhythm, should be congratulated for this and a host of events featuring genuinely progressive billing, as should Outlands, a new network for interdisciplinary art that brought Roberts and Jones together to create this call for sound as a tool for transformation.