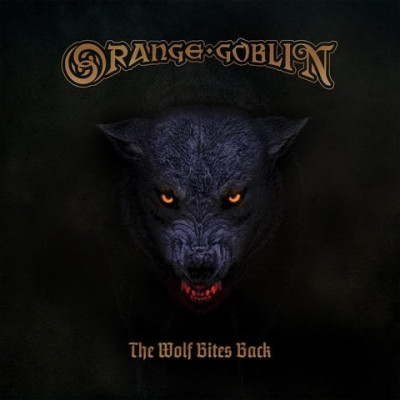 The Wolf Bites Back by Orange Goblin

A rejuvenation late into a bands career can take many different forms. Some are drastic, where a disgraced band has truly bottomed out and find a way to refocus and rebuild and return themselves to a former glory. Some are not so drastic such as in the case of Orange Goblin, a band that have remained consistent and are yet to release anything resembling a dud of a record but are, however, most recognised and praised for a trilogy of albums released at the inception of their career. Following a trio of records like Frequencies from Planet Ten (1997), Time Travelling Blues (1998) and The Big Black (2000) would be a mighty challenge for any band. The three records showcase a band with a love of huge, meaty doom metal riffs with an explosive, speedy rock and roll mentality.

Many bands would have been tempted to simply call it a day after such a near-perfect 3 years and stepped down with a pristine body of work and reputation. Orange Goblin did not but rather charged forwarded with Coup de Grace (2002), Thieving from the House of God (2004) and Healing Through Fire (2007). This second trio of records was, to me, a band not content to sit back and produce slightly differing variations on an already well established theme but to subtly and gently experiment while maintaining their trademark sound. It was admirable, it was far better than a lot of bands trying to do a similar thing at that time, it produced some great songs to add to and to improve the live set. What it failed to do however, in my opinion, was to add one more truly great album to the band’s catalogue. They are all solid efforts but perhaps fall ever so slightly low of the impressively high bar they had set.

Five years passed between Healing Through Fire and the band’s 7th album, Eulogy for the Damned (2012). Whether five years is a long enough absence to consider the album a comeback I don’t know but it is the band’s longest hiatus between releases. The result of this break was a focused and powerful album. Embracing some poppy and infectious hooks while never forgetting their history of destructive and vigorous riffs, Eulogy for the Damned was a triumph of a record and also happened to feature some of the band’s best lyrical work. The record was followed up by the speedier Back from the Abyss (2014) that channelled some of the force of the latter day Motörhead records, compacted into a strong and virile old school heavy metal album.

On 15th June Orange Goblin release their 9th full-length studio album and, as I like to think of it, the final record of their third trilogy. Gone is producer Jamie Dodd who worked on the last two albums, replaced by Jaime “Gomez” Arellano (Ghost, Cathedral, Paradise Lost). While the last two albums were as glossy and as smooth as the band had ever sounded, it suited them down to the ground. Thankfully, there is absolutely no drop off here and the band have found arguably a happy medium between Jamie’s work and the messier, dingier sound of the band’s earliest releases. Every string to Orange Goblin’s bow is showcased in a glowing light, from the gravelly vocal tones of Ward, the acoustic intro and the pounding drums of the title track, the menacing and weighty bass work of the brooding ‘Swords of Fire’ and the dirty, bluesy guitar solos of ‘Ghosts of the Primitives’. “I think that the band’s playing and songwriting on this album are the best they’ve ever been” vocalist Ben Ward was quoted as saying earlier in the year and so I’m sure the band are thrilled with the end result.

Orange Goblin really have excelled in more recent years as songwriters. Strong lyrics are not necessary for a heavy metal band that can write big riffs and have a strong rhythm section but there has clearly been a lot of care and attention paid to the lyrical content over the last 3 albums. Their latest release also features perhaps some of the bands most intricate and mature musicianship to date and the payoff is an album that performs exceptionally on every front. Of course there is some Black Sabbath woven into the fabric of the record, and some Motörhead. There is also some Thin Lizzy. There are some 70s influenced blues numbers. There’s some punk influence. There are some impressive harmonies. And should you still not be convinced, there are a couple of guest guitar solos from Motörhead’s Phil Campbell to look forward to as well.

Orange Goblin are a band that are probably primarily judged by most people on that first holy trinity of LPs. However, after over 20 years of rock and roll, and much like Motöorhead did, Orange Goblin have continued to put out music worthy of anyone’s attention. This record marks the completion of yet another trilogy of studio albums and maybe it will be overlooked by some, however it is the sound of a band that have only continued to learn from their own experiences and to strengthen as musicians and songwriters. Orange Goblin 2012 – 2018 is a force that will undoubtedly stand the test of time and solidifies their legacy as one of the countries premier heavy metal acts. Older, wiser and stronger, the wolf bites back again and it’s not showing any signs of losing its appetite any time soon.