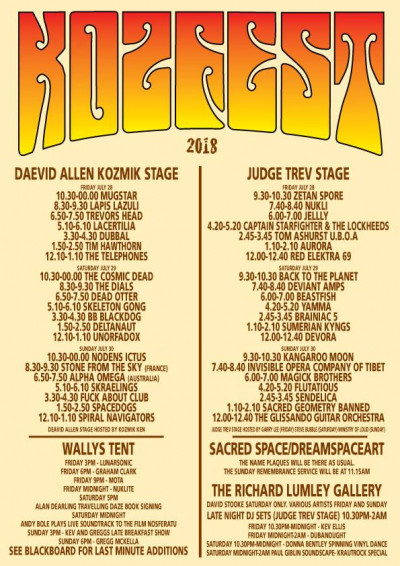 Kozfest is a small, fiercely independent music festival held in the middle of nowhere, Devon. It’s sold out once again on the strength of a line-up that appeals to those in the know, rather than relying on big-name bookings. With two main stages on a strip and bands timed to barely overlap, it’s possible to immerse yourselves in the diverse line-up where the only certain things are quality performers and a psychedelic bent. Here’s a chronological list of 10 things to make sure you leave your tent for at this year’s event.

Tom Ashurst
Tom is better known as the bassist in 2016’s headliners Hawklords. He performs an early acoustic set on the Friday that shows off another side to his musical personality. There aren’t many acoustic slots at Kozfest, with this showcase earned on merit, not association. This recent live video captures Tom in action.

Lapis Lazuli
Kozfest is a festival that knows what its punters like: psychedelic music. As such, they’re not afraid to rebook acts year on year that satisfy the crowds. This year sees the organisers look outside their core roster and Lapis Lazuli are amongst the new chosen ones. The Canterbury band sound like their home town, in a roundabout way – they’re a jazzy fusion ensemble who aren’t afraid to throw a host of styles into the mix, as proven on ‘Reich’, taken from 2016’s Wrong Meeting.

DJ Dubanought
It’s not just bands that wow the crowds at Kozfest. Judge Trev’s becomes a late night DJ zone that really kicks off after the last band have vacated the Daevid Allen Kozmik Stage. Expect the air to be even thicker with cannabis smoke than usual when DJ Dubanought brings a mix of classic reggae and dub sounds to the party. We’ve no idea what he’ll play, so here’s some dubby reggae from the Easy All Stars, covering The Beatles’ ‘A Day In The Life@.

David Stooke
2018 boasts an addition to the areas at Kozfest that’s long overdue: an art gallery. On Saturday, this will be given over to legendary festival artist David Stooke, in what is the first, full solo exhibition of his work. His paintings appear in Travelling Daze, a new book by Alan Dearling. Both author and artist will be signing copies of the tome in Wally’s tent at 5pm. 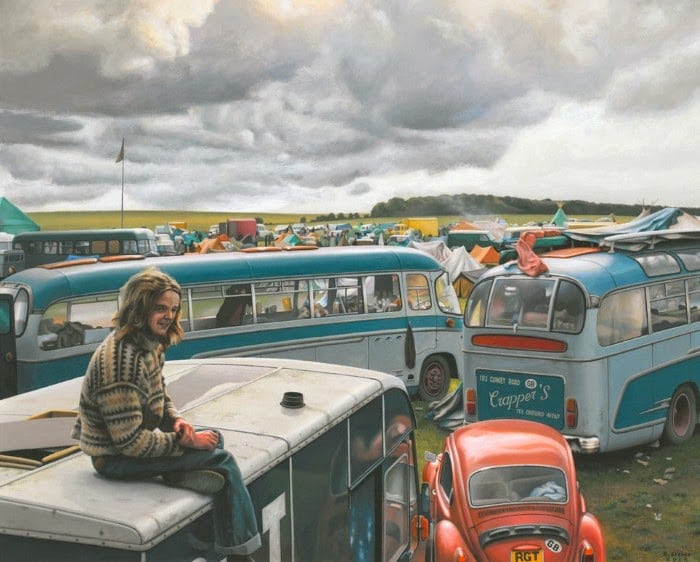 Skeleton Gong
It’s hard not to love a band who list their interests on social media as “strange noises, H. P. Lovecraft & gongs”. Nothing to do with Daevid Allen and co’s Anglo-French funk prog band, Skeleton Gong hail from Glasgow and plough a cinematic, doomy furrow. ‘Nephilim’, here accompanied by visuals from Murnau’s Faust, is slow, gloom-laden and unrelentingly heavy, as is all their best work.

Deviant Amps
You’d be hard pushed to miss Paul Woodwright at this year’s festival. Chief booker and organiser, Paul is as synonymous with the festival as it’s jovial host, Kozmik Ken. But Paul’s role isn’t just to bring in the bands and coordinate affairs – he’s also a shit-hot guitarist, and will take to the stage on at least three occasions: with the Glissando Guitar Orchestra, Devora and his own band, Deviant Amps, an Essex-based ensemble who play overdriven, noisy psych-pop songs with aplomb.

Andy Bole
Andy’s another Kozfest regular and his acoustic shows are always a delight. As comfortable playing bouzouki as he is on guitar, folk forms run through Andy’s blood. He’ll be putting on a special show soundtracking Murnau’s 1922 expressionist film Nosferatu in Wally’s Tent, which hosts both scheduled and pop-up events over the course of the weekend. Arrive early for floor space in what’s sure to be a blood-curdling end to the evening.

Sunday Remembrance Service
It can be hard to drag yourself from the tent on Sunday at Kozfest, although the record-breaking temperatures and extreme heat might make doing so by noon paramount. For those up and about on Sunday morning, the remembrance service is one not to miss. Held in the sacred space, it’s a chance to remember loved ones dear to the community, and to individuals. Bring wood to this year’s festival and help keep the sacred fire burning from beginning to end.

Flutatious
Those bringing a camping chair to Devon this year, and who are partial to Gong and the band’s many offshoots and associates, would be wise to install said seat in the Judge Trev tent this Sunday at Kozfest. All but two of the bands are directly related to the psychedelic heroes, who themselves headlined in 2016. Those two “other” bands are both also worth hanging around for: Sendelica are arguably the UK’s most underrated band, the Welsh space rock merchants are far too low down on this year’s bill to avoid a full house; Flutatious, meanwhile, are one of those festival bands who’ve been around for ever, but seem to have upped the ante with their latest album, Festival.

Nodens Ictus
Perhaps Nodens Ictus as a name lacks the familiarity of Mugstar and The Cosmic Dead, headlining on Friday and Saturday respectively. But any self-respecting fan of wide-eyed cosmic sound knows all about Ozric Tentacles, their parent band, and Nodens Ictus have been an on-and-off concern since 1986. Now a father and son duo consisting of Ed Wynne and Silas Neptune, the offshoot’s sound blends Ozrics and Tangerine Dream to great effect. Neptune recently released a solo album and appears to be in prolific form, meaning this semi-improvised headline set might just be the highlight of the whole weekend.