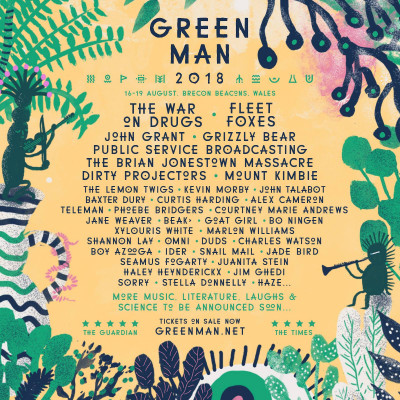 If it were up to me, the line up for a festival would obviously be full of amazing bands, but would probably seem a very weird collection to most. This is due to my listening habits, which have been sculpted and possibly even warped by the introduction of Spotify. Although vinyl sales continue to rise (the British Phonographic Industry (BPI) revealed that sales in 2017 reached their highest total since 1991), we don’t often sit down and listen to albums back-to-back anymore. Instead, we flick through albums and songs very quickly, just as we would flick through a social media platform, which means many artists that were enjoyable and noteworthy get lost in the crowd.

The line-up for Green Man 2018 is eclectic, as it is ever year. But it’s not just a random assortment of acts. Each band has been carefully chosen to perform on the stage that will suit their music. The intimate Walled Garden stage, for example, will play host to the lighter side of the bill, with acoustic bands and soft folk artists set to entertain those that would rather sit and soak up the sun (or, more likely, the torrential rain). The Far Out stage, on the other hand, will be buzzing with activity as the livelier bands are given a platform to jump around on.

And there’s more than music too. An array of comedians, artists and book writers as well as various exhibits or ‘areas’ makes the overall experience of attending the festival incredibly rich. Green Man stole a piece of my heart last year because of this experience. Admittedly, it left me a broken man after all the dancing and countless pints of Growler, but the wonderful variety of different performances has earnt it a solid place in my calendar each year. So here is my ‘must-see’ guideline for 2018.

Brooding and ethereal, the Cardiff-based HMS Morris deliver an intriguing spectacle on stage. Their blend of electro rock and psychedelia is like no other, and can be heard in the band’s latest two-track release called Phenomenal Impossible (listen here). Catch them early on Friday at the Walled Garden.

The musical baby of Lindsey Jordan – a recent high school graduate hailing from Maryland. Her debut album Lush (listen here) has been one of my most listened albums of 2018. It is heart-wrenchingly beautiful, full of emotion but delivered with an endearing devil-may-care attitude through relaxed instrumentation. Snail Mail will be playing at the Walled Garden on Friday evening.

Not a band, but an epic injection of 80s tracks, live aerobics routines and luminous glittery face paint. Lycra first started when Nathan Jones – an experienced DJ and event manager – and Michael Snooze first brought their genius idea of sweatbands and A-Ha to Cardiff. Its huge success has seen the show spread to Bristol and London. Go get some lunges in on Friday night at the Round the Twist stage, and check out the Lycra page (here) for more information.

More genius hailing from Cardiff. Boy Azooga is Dave Newington’s perfectly crafted project that fuses a mass of different genres. Groove is key, while the lyrics and melodies are both charming and moreish. In May 2018, Boy Azooga joined the big guns by appearing on Later With Jools Holland. They delivered an exquisite performance of ‘Loner Boogie’, making the following performance of ‘International Blue’ and ‘A Design For Life’ by fellow Welsh legends Manic Street Preachers seem dull and almost amateurish. Get Boy Azooga’s fantastic debut album 1,2 Kung Fu here, and catch them as they take to the Far Out stage for a second year in a row on Saturday at around lunch time.

This two piece are writing arguably the most infectious electro pop that exists right now. The recently released You’ve Got Your Whole Life Ahead Of You Baby (listen here) is a breath of fresh air amidst the droves of boring drivel being churned out in the charts. Other Ider songs like ‘Pulse’ and ‘Body Love’ reflect a clear theme of heartache and longing, drawing the listener in with delicate elegance. They will be performing in the Walled Garden on Saturday at around 5pm.

Currently on tour supporting The National, Phoebe Bridgers has established herself as a stunningly talented solo artist with the ability to deliver haunting yet relatable songs. Her 2017 album titled Stranger in the Alps highlights her impressive vocal ability, while each song tells a gripping story of love and loss. She will be at the Walled Garden on Saturday evening.

I was a late-comer to this brilliant band. Despite several previous attempts, their music only started to take hold of me in recent months. I now struggle to go a day without listening to their debut album that was released back in 2008. Friends and long-time fans have informed me that the Seattle-based band are deserved of their Saturday night headline slot on the Mountain stage.

Music has the ability to catch you off guard every now and then. It’s rare, but it can stimulate a renewed vigour, a sense of purpose, a happiness. That’s exactly what Haley Heynderickx did for me when I discovered her during one of my lengthy binges of KEXP radio’s live sessions. Her performance at The Islington in London (which was her first sell-out show outside of Portland) back in May was incredibly intimate and spine-tingly. Haley also released a fantastic debut album I Need to Start a Garden earlier this year (listen here), showing a gorgeous vulnerability alongside superb song-writing prowess. She will play the Walled Garden at lunch time on Sunday.

Due to bring something a little different to the festival, Curtis Harding will play the Mountain stage on Sunday at around 3pm. His delectable fusion of soul and pop demands both furious bopping as well as close slow dancing. Expect a rich variety of instrumentation, lots of wah guitar and some intense brass. Harding’s latest release, It’s Not Over, offers a clear example of his style (listen here).