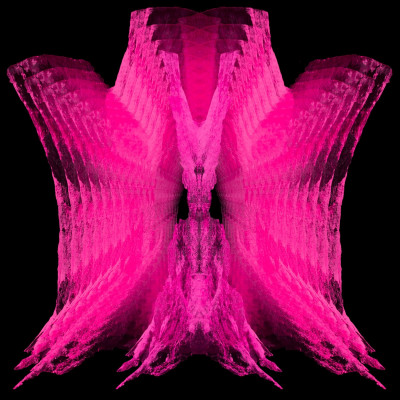 There seems to be a central theme to my album reviews that I’ve noticed over the last little while. Quite simply, I like to be entertained and surprised by the music I listen to and discover. Now I know that especially these days in the overcrowded musical climate that currently exists, it can be damn near impossible to hear a relatively new group that stands out, or at the very least, makes you take notice for all the right reasons.

So upon hearing that Radiant Knife was putting out album number two after a very impressive debut release at the beginning of last year, I was on board and ready to do a deep dive into the continuation of their music. You see, these two lads from Louisiana, those being Stephen Sheppert (guitar/vocals/keyboards) and Greg Travasos (drums), have come up with something that grabs my attention and pulls me in when I put on their music. Satisfying my interest for great progressive metal by adding sludge and atmospheric qualities, I can’t help but succumb to those elements when performed by these talented musicians.

On the new album Science Fiction, the band has put out eight tracks that will no doubt satisfy their fan base, and add new lovers of their craft to the fold. But enough of me flapping my gums and lauding them, what’s important is what the tracks sound like!

‘Stereo Lords’ kicks things off with a forceful riff pattern that belts out of the speakers and is then guided by a mid-paced drum push. The journey takes us into either an organ accompaniment or a really good guitar pedal mocking of the sound. Whichever it is makes this song jump out and demands the listener take notice. This track is the embodiment of a perfect album opener; rich and full of energy, lurching forth and taking no prisoners. The boys keep up the frantic nature of the opener with ‘Wasted Minds’, and give us Sheppert’s first appearance of vocals on this album, full of piss and vinegar. While the band keeps up the energy of the opener, they manage to go a tad psychedelic and atmospheric all while keeping the pace lumbering, which is quite a feat. It’s also at this point that I really start to notice the major talent of drummer Greg Travasos, who has a certain organized chaos about him. I love his style.

‘All We Are Is All We Know’ gives us vocals that show a cleaner side to compliment the aggressive nature of the music, which comes across to me as an almost perfect melding of what Intronaut and early Mastodon would sound like in collaboration. Comparisons aside, this band takes those two contemporaries and elevate the overall sound into that already mentioned atmospheric twist, which adds to the overall depth of this forceful yet detailed musical outing. ‘The Human Condition’ starts off with a dirty bass line which goes into a slow and deliberate pattern of guitar picking. The song morphs into a more up-tempo jangling before slowing back down once again. There’s a lot of room for the instruments to breathe in this track, which is welcome after the forceful start of the album. Slowing down and letting us digest the carefully constructed sounds is often times important, and not always accomplished by other bands when really needed.

The pace picks up again with an awesome syncopated run involving all instruments on ‘Awakened’. That is the main theme of this song; co-operation of all instruments. Nobody is straying off into other areas or noodling around. All instruments are on the same page and moving towards a goal. It’s very impressive, especially for a song at over seven minutes in length. ‘Swarming Lights Surround You’ is a relatively short song that acts as a doomy and laid-back psych trip with some off in the distance clean vocals. It’s a nice break in the action and shows more layers of the band’s sound. Continuing on, ‘Withered Hands’ has an interesting acoustic opening that leads to a light and airy, yet creepy ambiance. The song is simplistic by the band’s standards, but it opens up an expansive and dreamy mood before upping the ante and going into a distorted take on the theme of the song with Sheppert’s vocals helping to carry us further into that dreamlike state. Songs like this continue to show the multiple layers that Radiant Knife possess. This may almost be the most interesting song on the album in some respects.

‘Suffer Under God’ is the final song on this crazy trip of an album that comes in at a hair over nine minutes (the longest on this platter), and serves to me as almost an accompaniment to ‘Withered Hands’. It comes across as a lurching and lumbering cousin to the aforementioned track, and serves to once and for all show us that atmosphere in progressive metal isn’t all about fancy keyboard effects or computer tinkering. Give the instruments full reign and show us a warm sound that resonates in your ears, and if you can do that, you’ve accomplished a task that some bands never master after countless albums.

I remember hearing the band’s debut release when it was put out, and was very impressed by the sludgy meets high energy prog. I’m confident in saying that the group has matured and grown impressively on their second outing. What’s equally impressive is that the band comprises such a potent sound from only two members. Another important quality to note is that the vocals are used sparingly and only when it adds to the song, and at times are used almost as an instrument in the background, which really captures my attention.

This album clocks in at just under 50 minutes, but it feels longer. Not due to boredom, but perhaps due to the weighty approach of the music. There’s a lot to digest, but I love that. And I can’t get these songs out of my head after repeated listens. I keep going over certain passages in my mind and then need to venture back to the particular track to once again appreciate what I’m hearing.

I have a distinct feeling that this will be on many people’s year-end lists. It’s that good. It’s not overblown and fancy, and it sticks in your head. What an excellent album from start to finish.