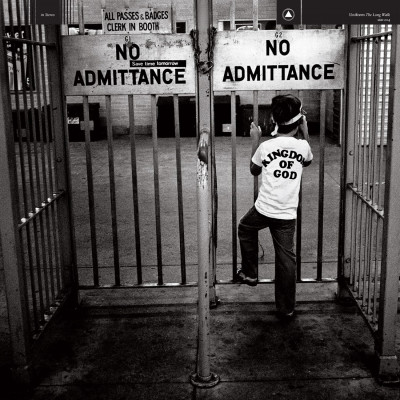 The Long Walk by Uniform

Uniform on the web:
Website | Bandcamp |
Release date: August 17, 2018
Label: Sacred Bones
by Femi Oshatogbe | September 18, 2018 | Reviews
Borrowing its name from the 1979 Stephen King novel, which depicts a brutal totalitarian, dystopian version of America The Long Walk is the fourth album by the New York duo turned trio Uniform and their second for the New York label Sacred Bones. Curiously, unlike their previous albums which relied purely on a drum machine, on their latest album the group enlisted the help of Liturgy drummer Greg Fox to provide the record’s percussive backbone. The line-up shift, alongside recent interviews where the band discussed having a limited time in which to record the album and changes to their instrumental set-up, suggested The Long Walk was to showcase a more spontaneous, less structured and perhaps to some extent more human side of the group’s sound.
The record opens with the smudged electronics and grimy industrial riffs of ‘The Walk’, immediately apparent is the groups’ lo-fi production choice, which lends the instrumental backdrop a brittle, greyed out feel, in keeping with the records overall dystopian theme whilst Berdan’s atonal, barked vocals add a sense of baleful urgency underpinned by Fox’s steady metronomic  beat.
Following track ‘Inhuman Condition’ slows the pace to a gloomy lugubrious crawl in keeping with the brutal test of endurance depicted in the King novel whilst Berdans vocal’s veer increasingly towards the manic, at one point almost collapsing into wordless rage. It’s also here that the impact of having live percussion can be more keenly felt as Fox’s switches his style between disordered rhythms and mid-paced grooves. It’s a penetrating, affecting listen and captures early the nervy tension that runs throughout the record as it teeters uneasily on the edge of complete sonic dissolution.
While the opening pair of tracks suggests a different pace to the relentless machinic industrial hardcore of their sophomore album ‘Wake In Fright’, there’s still plenty of scope for hardcore punk angst on the rumbling subterranean train wreck of ‘Found’ and the choppy guitar riffs on ‘Alone in the Dark’. Elsewhere the group trade relentless noise-rock with passages of static detritus on ‘Headless Eyes’ and the sludgy, cathartic penultimate track ‘Anointing of the Sick’. Meanwhile the deceptively restrained ‘Peaceble Kingdom’ crawls out from beneath the wreckage to close the album as lumpen detuned guitars and Berdan’s snarled vocals coalesce and then disintegrate around gradually accelerating percussion.
Tracing a line that crosses chaotic punk, scuzzy industrial and commanding noise-rock, particularly given the shortened recording time, could easily end in disaster, yet The Long Walk blurring of genre boundaries and sustained sense of crushing doom is managed with a finesse that reveals a growing mastery of both atmosphere and texture. It’s a tense, yet frequently rewarding aural experience likely to appeal to both fans of their previous work and anyone with an interest in dark, idiosyncratic, noise.