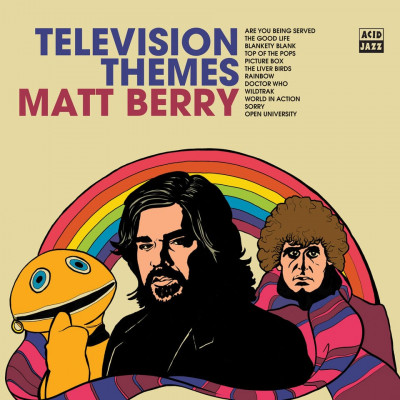 Television Themes by Matt Berry and the Maypoles

When I was about 7 years old, I  fell over and hurt my leg.  Alan Rothwell from Picture Box was passing and asked if I was OK, I said “yes, thank you” and that was the end of that entire episode.  I’d forgotten that’d happened for 40 years, and listening to that programme’s frighteningly psychedelic theme tune re-performed on this bizarrely excellent record, it’s just reappeared in my head.  This is what nostalgia is supposed to do; bring up stuff that’s not necessarily memorable (I tend to remember memorable things just fine) but stuff that merely happened, no matter how odd or mundane – the things that make up most of our lives.

This whole thing is about nostalgia (of course it is!  It has Tom Baker and Zippy on the bloody cover), as remembered specifically by the multi-talented Matt Berry along with the Maypoles’ look back at life through the medium of 1970s TV themes on this Television Themes recording which manages to bring on such a strong sense of belonging to a time which has long since passed.  I am of this era.  I remember this stuff the first time round to various extents, as a youngest child (and therefore the sofa-less, powerless human “remote control”) spending my days and evenings with the entire family in front of the one television set in the house.  I remember every single tune performed here, and this record prods some very definite buttons in me.  All of them, as it turns out, evoke utter joy.

It’s a really well-structured album.  It almost feels as if we’re being eased into this almost-reproduction world with a few choice renditions of “safe” gems of the age, albeit in the style in which the whole collection will reflect.  ‘Are You Being Served’ is on the one hand down-the-line facsimile (even down to Celia Fage’s faithful rendition of the theme’s vocal lines), but it’s also a lot jazzier than I originally recall.  The same can be said for ‘The Good Life’, the official Nicest Sitcom Ever Made with its nice theme delivered in suitably cheery fashion with a delicious funky breakdown in the middle which Margo Leadbetter probably would never have approved of at the time.  Jerry would have secretly loved it though.

By this point, you’re pretty much in, and it’s all brilliant and mad and wonderful.  The aforementioned ‘Picture Box’ remains frightening, ‘Top of the Pops’ is the Phil Lynott ‘Yellow Pearl’ edition which was more my sister’s era (and encroaching on my own) than my brother’s ‘Whole Lotta Love’ redux, ‘The Liver Birds’ is pure funk with familiar twee flute lines and top-notch bass solos and ‘Sorry’ now has a dub section.  And none of this seems odd.  It all seems fine.  More than that, it seems great.  Matt straddles a very fine line between reverential and playfulness and gets the balance exactly right, because that’s exactly how this stuff should be.  And that’s exactly why, when you get to the Glam backbeat during an otherwise terrifyingly accurate ‘Dr Who’, it all fits perfectly.

Nostalgia does have its weird side-effects though, and not only during the bit where the even-more-jaunty-than-the-original ‘Wildtrak’ started and I excitedly and incorrectly shouted out “Animal Fucking Magic!” – my favourite track by far on this is the fantastic Prog of the ‘World in Action’ theme, rendered her with an uncharacteristically (for this record) ferocious drumbeat, yet this is the one that made me cry because this is the one that I remember watching with my Dad back in the day (why I watched this at that age remains a mystery, but I’m glad I did), and it’s a piece of music that really punches me.  This version is just stunning, and I’ll quite happily sit here and state that this is my favourite track of 2018 and is unlikely to be toppled.

Most of this will mean little to most people, and possibly nothing to some depending on age and geographical status.  I don’t care, and everyone else who listens to this and is instantly transported back to a childhood that didn’t completely exist won’t care what you think either.  It’s a record that is so well-arranged, so much fun to listen to and just so thoughtful and considered that even if you’d never experienced the Open University (or were far too sensible to be awake when it was on) will find something to really get into here.  And I suspect samples of it will appear all over the place for a long time to come. 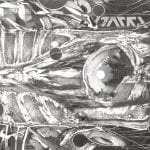