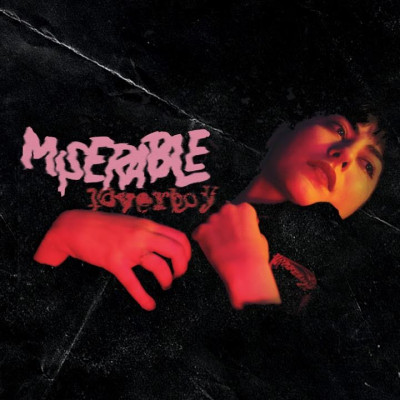 The songs are all acid-tang sweet-and-sour tunes, layered thick with fuzz and pierced by Esfandiari’s cough-syrup eyeroll vocals. There’s new-wavey harmonies and abrupt hit-sweeps on ‘Gasoline’ that are almost a bit Lemonheads-y, a beat like a punchline then a melodic swoosh that bridges to the next bit, while the title track has a bit more of a retro soundtracky sheen to match the image and lettering on the cover. ‘Cheap Ring’ is a grumpy plaint with an obstinately leaden rhythm to match, and ‘Pain Farm’ risks being submerged under swirling waters, these two tracks especially expressing a certain pleading foghorn warning amidst the gathering mists, especially as the latter evaporates in radio screech.

Overall there’s a sort of 90s feel to the noise, sort of joining the dots between Hole’s grungy pop indignance, Mazzy Star’s deadpan indie shimmer, and My Bloody Valentine’s fragile melodies under hissing mattress slabs. And as with those bands, the voice and style combination of the signing makes it utterly distinctive.

The Dog Days tracks are maybe more hopeful but brittle, the same style but more lighthouse than foghorn… ‘Hotel’ has a wavering line underpinned by alternately jangling and stabbing guitar chunks, then ‘Fever’ is, as the name hints, hallucinatory pastel dream waver, guitars and sung notes melting into one another.  The track ‘High’ I could listen to all day, the vocals and guitar switching places so that the icecream van chiming melody swings back and forth at the fore while the words stumble and wisp around, reminding me again of 80s teen adventure movies, the grainy-rollerskating-montage-lilt tugging at some nostalgic memory just out of view. Finally ‘Kiss’ is a brilliant closer, with “when i’m with you… caught in a dream… all the things i want to tell you” punctuated with camp-severe anvil klangs. Here Joy Division’s sometime buttoned-up emotionalism faintly echoes around the track, this sense amplified later on while a pastoral cyclical keyboard whistles around.

A unique musical identity carries through the grungy grouchy fuzz and wistful spiralling of both records, a stinging stubborn prettiness swathed in needling statick. Charmed.