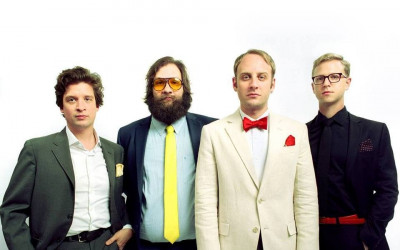 Since I saw them at the Islington Assembly back in January it seems like Deer Tick have lived their lives on the road.

With a massive 67 events through the year, it’s hard to see how they could have been doing anything else, but this October they made the announcement that there’s a new record on the horizon. Okay, it’s a mix of new material, covers and some existing tracks in what they’re calling a “compilation set” though I would call a “best of”; but it’s still impressive that they’ve found the time, I feel.

This announcement has, of course, added to the hype around their live shows, and while they’re a damn good live band, and that should be enough, the second excuse of new material does help justify seeing them twice in one year.

In my first trip to Dingwalls, when I walked in it really felt much smaller than other venues Deer Tick have played, but in reality the capacity difference to the Assembly is only 300. and it’s the low ceiling, short stage and lack of security barriers that make it not smaller but intimate. And who doesn’t appreciate a close-quarters encounter with quality musicians?

Much like last time I saw them, the stage was set with only Deer Tick kit and I wondered if this was another self-supporting performance; but in a pleasant surprise, we were treated to a set by Joanna Barbera, a Nashville-based solo performer whose web profile describes her genre as “spooky folk” but I would have said was more 90’s Pop-influenced American Rock – possibly because she was sporting a semi-acoustic guitar rather than a standard acoustic, and it added a slight edge to her sound. Barbera is an excellent guitarist and her melodic vocal floating over some tasty finger work is a winning combination.

With minimal delay after Barbera’s set, Deer Tick took to the stage. And hit it hard. Far from being worn down by their time on tour, they had more energy than I remember, and the first few songs in the set were a high-octane hit that got everyone moving. It took me by surprise but it was a very pleasant surprise, and the high-tempo mixed with the fact that they didn’t pause for more than a couple of seconds between songs made the first part of the set flow seamlessly; and even when they did slow down a little, there was crowd interaction and banter that kept the momentum going.

Alongside all of their fan-favourites such as ‘Don’t Hurt’, ‘Twenty Miles’ and ‘Look How Clean I Am’ we were treated to their new song ‘Hey! Yeah!’, another upbeat funky number that fits well in the set. If it’s an indication of where their writing is taking them at the moment, it’s a shame there isn’t a full album of new material to look forward to. “Can you take me to a higher plane?”, sings John J. McCauley, but I’m thinking to myself “you’re already there, man!”

This year has been good for Deer Tick, and they’ve come back to London a more dynamic, tightly knit unit. I do wonder if the larger more distant stage at the IAH left them a little bit lost, and if they just work much better in more intimate environments. If so, then in the nicest possible way, I hope they never get any bigger as their sound, performance and set was excellent. And the crowd response seemed to recognise that with heavy applause and cheering at the end of every song.

With brief thanks, Deer Tick closed out their set and headed off. Like so many others these days, there was no encore and I for one was sad to see them go. “Leave them wanting more,” they say. I do – I do want more and when they’re back in the UK I’ll see them again. And again, and again, and again. . .