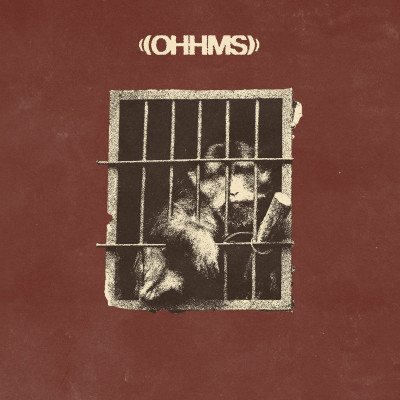 Sometimes you have to dispense with all the clever, music reviewer-y words and tell it like it is: this album is amazing.

Part of the necessity to ditch the flowery descriptions and florid metaphors with Exist, OHHMS‘ second full-length album, is because the five-piece from Kent, England, are like nothing on earth. They are loud, yes. Heavy, without a doubt. Some call them sludgy, others point to doom, or the pockets of punk rock contained within. Some even invoke the P word: progressive (probably because they are fond of a time signature change and songs exceeding the 20-minute mark).

They are probably all of these, in varying degrees. But like those massive sculptures that I used to see in the gargantuan Turbine Hall at the Tate Modern in London, they are shiny, awe-inspiring, far-reaching, unnerving, familiar in places but alien in others and above all, impossible to describe satisfactorily.

What is easy to describe is the message contained in the songs in Exist: they are meditations on pacifism and animal rights, some of which stem from the vocalist Paul Waller‘s decision to refrain from eating meat.

Having read the previous sentence, I bet I know what you are thinking: oh no, another bloody preachy, plant-eating do-gooder telling me via the medium of heavy music why I shouldn’t eat a bacon sandwich.

If you were thinking this, you’d be wrong. Because these songs are like nothing on earth (there’s a theme developing here, in case you hadn’t noticed). And the lyrics are very well written, so if I hadn’t told you the album was concerned with animal rights (and you hadn’t noticed the caged primate on the cover) you could listen to it blissfully unaware of the important messages contained within. You could lay back and let the huge riffs and occasional “woah oo woah” chants wash over you. Or more accurately tumble on top of you, pinning and crushing your puny flesh-eating body to your environmentally unsound sofa.

The opening track, ‘Subjects’ is sung from the perspective of a caged animal; one intent on wreaking revenge on humans for the millennia of killing and abuse. In the near 23-minute running of the track there are some points of genuine groove, a good few hooks and singalong moments (the aforementioned “woah ooh woahs”, for instance) and a mid-section of eerie quiet. By the time Waller bellows “I am mad fucking cow” at us, we are fully converted to the message and the music – which is no mean feat.

‘Shambles’ is a good deal shorter than the opening track at a mere eight minutes and begins with a quiet yet angular intro which morphs into a muscular riff that serves as the ideal base for the ominous chanting vocals. The words shift the perspective to a human viewpoint and its plaintive “I’m so sad” chorus gets right to the listener’s heartstrings. If I had to pick a favourite of the four songs, it might be this one. Or the first one. Or the third. Or the fourth.

Speaking of which, the final two songs are shorter still, running at around six minutes, but they are no less powerful. ‘Calves’ opens with a morose, funereal yet other worldly air, with some harmonies amid the anger and sadness, while ‘Firearm’ is direct and furious. If you are not humming to yourself its repeated refrain of “Engage direct action, animal enterprise heroism/pragmatism” for hours after listening, then there’s something wrong with you.

And in that final few seconds of the last song, we can hear all that is good about Exist in microcosm. The riff is a beast, while the lyrics – biting, sardonic and sarcastic – are delivered in a way that get under our skin in more ways than one. It is a triumph. Indeed, the whole album is a triumph.