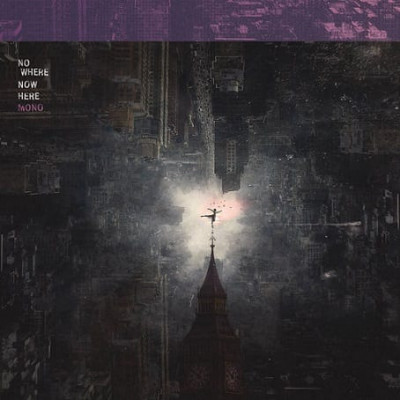 There are few bands on the planet who can convey such a range of extreme emotions in the way Japan’s Mono manage to do. Over a career spanning 20 years they have crafted some of the most beautiful and melancholic music utilising sumptuous stringed arrangements and delicate dexterous guitar work. At the same time unleashing serious ear destroying noise on those of us blessed with capturing their unforgettable live shows. I hold them partly responsible (along with Part Chimp) for giving me the ‘hum in the drum’ after seeing them play in a tiny venue in Belfast years ago. The levels of sound that these aesthetically diminutive musicians whipped up were incredible. For their much anticipated tenth studio album Nowhere Now Here, Mono once again recorded with Steve Albini at Electrical Audio Chicago. Notably, this is the first album to feature Mono’s first line-up change, with new drummer Dahm Majuri Cipolla picking up the sticks left down by Yasunori Takada.

The sighing brass and soothing strings of ‘God Bless’ mournfully provide the introduction, this is music to soundtrack the passing of souls from this life to the next. As the intro fades out the familiar floaty twin guitar lines from Takaakira “Taka” Goto and Hideki “Yoda” Suematsu usher in the crushing ‘After You Comes The Flood’. One of Mono’s heaviest tracks powerfully driven along by new drummer Dahm, the repetitive and hypnotic guitars get swooped into the air by waves of stunning distorted riffs while Tamaki Kunishi’s formidable bass playing tries to bring them back down to earth with as much force as can be conjured. Albini generously pours on the noise as the track valiantly intimidates with just how feral and vicious it becomes. This will be amazing played live, it will be impossible to not become totally consumed by the heaving groove.

‘Breathe’ is a rarity for Mono in that it contains vocals, though I prefer to not sully my review by revealing my honest feelings about Tamaki’s turn in the spotlight. After the intensity of ‘After You Comes The Flood’ the calm is welcome, to let you regain your composure. When the elegiac guitars provide a shimmering haze, it is a beautiful and heart breaking sound and once again Mono caress your emotional core with their incredible way with melody and atmospherics.

The lone guitar lines at the start of title track ‘Nowhere, Now Here’ generate feelings of isolation and loss of hope. Albini’s trademark drums are dry and high in the mix seemingly at odds with the swelling strings that simmer underneath. Before you know it, a maelstrom of thunderous percussion and driving guitars are whipping you out of your sorrow and reminding you that there is indeed hope and you need to rise up and be strong. This music may well be instrumental but the story that is being dramatically unfolded is as emotional as any words could ever be. As the track winds to an end the guitars become increasingly euphoric arching higher transporting you to a brighter place. Once again, Albini nudges Mono into the echelons of intense post metal with layers upon layers of heavy guitars that must have had the display levels bouncing into the red across the mixing desk.

Guitars prickle like tiny needles on ‘Far and Further’ before Tamaki’s imperious bass guides the track somewhere less tense. There’s a rapturous eruption of sound yet the overriding theme is one of deepest sorrow and melancholy. As if to exemplify the atmosphere of this intense and heart-rending album, Mono go for the jugular by naming one of the tracks ‘Sorrow’. It contains the most heart-warming strings and a song structure with a “chorus”, if instrumental music can have such a thing. As the track explodes into the epic finale, (Albini again heaping on the distortion and layers of guitars) the influence of Nils Frahm is projected to the fore with some sublime synth chimes that flicker and dance to stunning effect. I can see those strobes mercilessly blinding audiences around the world as the band channel this astonishing music.

Mono have been combining strings, piano and guitars throughout their 20 year career and on this album, they manage to fully engage the listener throughout, by sheer force of melody and picking off the perfect progressions, from all of the aforementioned instruments. ‘Parting’ is a haunting lament that acts as a soother between the tumult of ‘Sorrow’ and ‘Meet Us Where The Night Ends’. Recently Taka collaborated with John McEntire as Behind The Shadow Drops, implementing electronic sounds. Fellow post rockers Explosions In The Sky have been introducing elements of electronic studio trickery into their sound and Mono expertly provide a similar sound here, with a ghostly loop that sounds like wheezing souls emerging from being locked away in a hellish crypt. Dahm provides a snappy beat to match before the arrival of huge swathes of guitars that sound like the rest of hell escaping.

Desolate brass mournfully hovers over an ethereal hum and the scene that is set in ‘Funeral Song’ is exceedingly dark and devastating. The Mono blueprint of introducing a track with delicately plucked guitars, each guitarist balanced in each ear, never grows weary and on closer ‘Vanishing, Vanishing Maybe’ the haunting melodies being created finally veer towards a brighter atmosphere. Having said that, there is still an unescapable feeling of emptiness and loss, despite Dahm’s attempts to drag the rest up with a sprightly beat. When the gorgeous swooning guitars dive and swoop over this backdrop it is jaw dropping and will have you in pieces, if you weren’t already.

Occasionally albums come along that really trouble this reviewer. Nowhere Now Here has been on my repeat playlist for months and yet I’ve only just managed to try to put together some words. I cannot do this music justice and the only way you will fully appreciate it is to listen to it yourself. Mono have perhaps been guilty of treading water with some of their recent releases. Albums that delivered exactly what you would expect, but with Nowhere Now Here, every track bleeds raw and you cannot help but become emotionally snared by these stunning soundscapes. A triumphant, beautiful, affecting, tragic but glorious collection from one of the world’s finest instrumental bands.