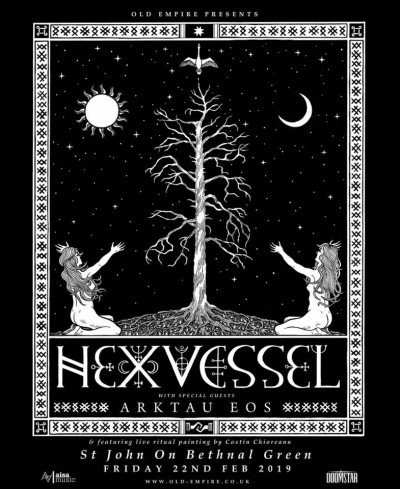 “Real music should aspire to magic,” Hexvessel main-man Matt McNerny reminds us at one point in tonight’s show, “and I’m glad to have these musical magicians with me.” The pagan themes and ritual performances on display tonight are not the usual kind of magic that you’d expect to find in a practising Anglican church, although there are thick clouds of frankincense hanging in the air. But we’re all very glad that tonight’s venue, the fine St Johns on Bethnal Green, welcomes those with heathen leanings into their atmospheric building. It’s a testament to the diversity of our capital that you can buy a tasty ale (for £3!) from the vicar himself and make pleasant conversation about the gory paintings of the Stations of the Cross (by Chris Gollon) that surround the interior. And it could not be better suited to the pairing of Finnish acts that Old Empire have arranged for us tonight.

Arktau Eos make ritual dark ambient music and seem to take their self-described “religion with no name” very seriously. Of the four or five gigs I’ve seen at St John’s, tonight’s is lit the best, with red uplight directed through a mesh of some kind to suggest a bloody pentacle over the altar and to highlight the paintings either side (Station 8: ‘Jesus meets the women of Jerusalem’ to the left, I think, and Station 9: ‘Jesus falls for the third time’ to the right). Emerging from stage-left, each member of Arktau is dressed like a version of the Scarecrow from The Dark Knight who’d spent too long at Glastonbury, yet still managing to appear suitably ominous. To me, pure “ritual” ambient suggests a focus on the performance of some ceremony as part of which any sound – the shuffle of feet, ringing of bells, chanting of incantations, etc. – is almost incidental. Arktau certainly provide plenty of ceremony, with members turning to the altar in a praise-the-sun gesture, parading the perimeter of the stage, donning a red cloth, and burning incense with which to symbolically anoint the audience.

But they have ultimately risen from the black shadow realms of dark ambience. From incidental fader crackle, low throbbing drone, dungeon-synth-esque keys and a low-mixed woman’s whispering to industrial hissing and tenor Gregorian chant, Arktau’s set captures a mood somewhere between meditative and uncomfortable, somehow coming across as even more ambient than on record.  Unworeldes (2012), for example, has plenty of abstract textures but provides enough concrete details to stick in the memory. Yet watching Arktau live (a thoroughly absorbing experience that I would recommend) leaves less in the way of concrete sonic images and more of an overall atmosphere, both eldritch and ancient.

In lieu of a real setlist, I have produced an Order of Service for their ceremony, as unofficial as it is irreverent:

The Blowing of the Bone Flute

The Anointing with Sage

The Sacred Meandering of the Stage

The Hooding with the Red Shroud

(The Sleeping of the Girlfriends)

The Twiddling of the Knobs

The Yoga Pose of the Serpent Before the Altar

The Emergence of the Blue Light

I was lucky to see both Hexvessel and Arktau Eos at Roadburn 2018, playing separate sets as well as their collaboration, Mirror Dawn which drew from both acts’ debut albums – Dawnbearer and Mirrorion respectively. I’m certainly a fan of both bands on their own, but there was something about this collaboration that brought out the best of both: Mirror Dawn worked to reign in some of Hexvessel’s more exuberant moments and to bring out Arktau’s more musical qualities, and I hope it will be released on Roadburn Records one day. There is no collaboration tonight, unfortunately, but it scarcely matters when both are on such fine form.

Matt McNerney is a very talented man. As well as fronting wyrd, forest folksters Hexvessel he currently blasts through banger-packed, post-punk sets with Grave Pleasures. Yet you might not know that he recorded seminal avant garde black metal albums (as ‘Khost’) with Code and The Unsearchable Riches of Void: Resplendent Grotesque (2009) and Posthuman (2003) respectively. McNerney commands a six-piece band tonight from beneath the wide brim of his ever-present hat, without regular member Marja Konttinen unfortunately, but with some other friends in tow: classical violin soloist Daniel Pioro; Costin Chioreanu performing “live ritual painting”; and folk singer Carolyn Hillyer sat in the pews. Pioro is close to becoming the star of the show, so beautiful is the warm, woody tone of his violin and so graceful its slurs, while Chioreanu – whose work you’ll recognize from just about every metal band worth hearing – attracts attention for the painting that gradually takes shape throughout the set [starting with grey washes over the canvas]. You’ll find out about Hillyer later.

From the four-part, a capella harmonies of ‘Beginning’ to the sombre piano of ‘Closing Circles’, Hexvessel’s new album All Tree is a glorious ode to British folk music, shorn of some of the more psychedelic, progressive elements of previous release, the also excellent When We Are Death (2016). Touring to support the release, they play almost the entire album tonight with a few older songs and surprise covers along the way. While I’ll admit that I was initially unsure about the singles I’d heard from All Tree (sounding, if I’m honest, a little pretentious on first listen), all of my misjudgements were laid bare very quickly upon hearing the album live, and I bought it immediately after the show. As with older material, these are songs that don’t sound overly complex yet are meticulously crafted. ‘Old Tree’, complete with delicate 12-string guitar parts, is beautiful and elegiac, while ‘Wilderness Spirit’, with its energetic beat and jaunty violin figure, has shades of Cornish folk-singer Seth Lakeman.

[Watching impressionistic brush swirls gradually coalesce into form. Is it the sky?]

One highlight is tonight’s rendition of ‘I Am The Ritual’ from Dawnbearer, perfected by a droning, slurred violin-part reminiscent of Al Cisneros’s distinctive basswork in Om. McNerney introduces ‘Cosmic Truth’ with a brief anecdote about the band’s privileged experience of seeing a shuttle launch; performing now without his guitar, he becomes more gesticulatory and dramatic as the song progresses.

[Towers rising to the horizon…Maybe it’s an Old Tree™?]

Before playing “one of their best received songs” ‘Sacred Marriage’, McNerny surprises me (and others presumably) by announcing that the song’s lyrics were written by Carolyn Hillyer, while her friends enthusiastically point her out in the crowd. It’s a genuinely beautiful song (which was never spoiled by my childish habit of giggling at the somewhat-phallic line about a fertile magic staff), one to which McNerny attributes his initial interest in paganism.

Returning to the stage for the encore, McNerny self-deprecatingly states that ‘I forgot my hat, I won’t be able to sing now,” before talking about the folk music that he listened to whilst writing All Tree from his home countries of Britain and Finland. And which better song for a pagan forest folk act to cover than ‘Gently Johnny’ from the Folk Horror classic The Wicker Man, Pioro’s violin for which is so moving that I’m mostly too absorbed to imagine Britt Eckland’s body-double writhing all over the church walls. A second treat comes in the form of a Coil cover, the typically enigmatic ‘Fire of the Mind’ perfectly adapted into a stark acoustic requiem, followed by a Hexvessel classic ‘Woods to Conjure’.

[Finally, by the merch stand, the completed painting is displayed: a face titled upwards, a beatific smile, framed by gnarled, trunk-like hands, with an ominous eye peering between.]

There’s a bit of a community vibe here, given the closeness of both bands and the friends they’re brought with them, which makes it feel like more than just another gig. Hexvessel and Arktau Eos certainly aspire to magic, as do a lot of sonic mystics out there, but come a lot closer to it than most.