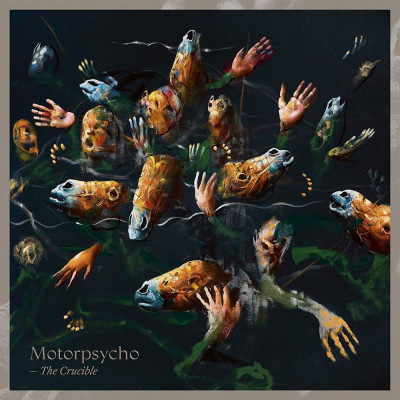 The Crucible by Motorpsycho

Whilst not as sprawling as previous release The Tower, Motorpsycho’s new album The Crucible is no less epic in scope and although only three songs in length, they easy match up to the wild progressive abandonment of that prior album. In fact, you can almost see this as an addendum, or encore if you will.

Not to cast the album off as simply though, as The Crucible is more than able to stand its own ground and if anything its succinctness makes it a much more enjoyable listen. Whilst we cannot knock The Tower in anyway, as in itself it was a remarkable album, sometimes shorter really is sweeter. Just don’t expect Motorpsycho to skimp on any of the progressive power that they are known for, and with their new dynamic as a trio, find themselves up on the pantheon of other great power trios.

‘Psychotzar’ really sets the stall out with that power as the riff explodes out of the speaker and for the first 5 minutes or sounds like the greatest biker anthem ever. As is the way, things are not quite what they seem though and around the halfway mark the song takes a turn into melodic progressive rock, all chord changes, chiming bells, nervy riffs and harmonies. As it builds into a giant crescendo, topped off by a gong (what else!) we find ourselves back in that wonderful prog rock territory of The Tower again.

There is a wonderful 70’s feel about this album as the folky beginning of ‘Lux Aeterna’ brings to mind the symphonic epics of Yes and Genesis. The song switches between glorious, majestic orchestral sweeps to intricate passages which allow the song to evolve into a discordant moment of intense guitar play, before returning to the wonderful harmonies as a transcendent guitar solo takes flight.

The title track ups the ante for progressiveness over its twenty minutes or so and presents a band who are at the absolute peak of their powers. Motorpsycho have never been ones to shy away from challenging themselves (and with that, their listeners), but here they sound absolutely revitalised in their scope. The confidence in the way the music changes from jagged riffs to mini-symphonies is nothing short of remarkable, and serves to make The Crucible such an intense and satisfying listen. The band seem so at ease with each other that the music becomes something so natural.

Judging by current form Motorpsycho may very well hold the claim for being one of the greatest bands currently plying their trade. A sprawling back catalogue may put some listeners off, but if ever their was a place to start it could very well be The Crucible. It’s an album which not only defines who Motorpsycho are these days, but also defines a quality and respect in music that you simply don’t find within the mainstream. That Motorpsycho’s name keeps getting picked up more and more goes to show that in the end, it is quality that outlasts everything.