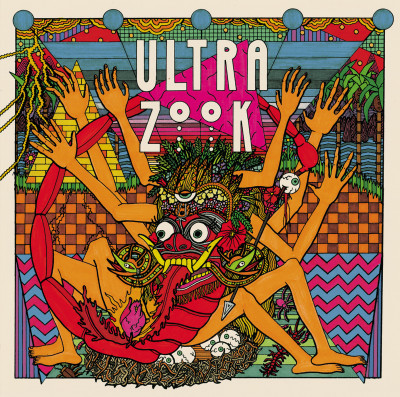 It’s not often at Echoes and Dust that we get an email from a band making the following bold and possibly apocryphal  statement:

“If God exists, it is clear that pigeons are his messengers on Earth. They’re everywhere, watching our every movement in the street, in our cars, through the windows of our bedrooms. They report all our good and bad deeds to God, who is obliged to correct our trajectory, brutally punishing us.  This can cause us to make a lot of mistakes at a concert, for example, or can give us hangovers.  For good deeds, however, he rewards us putting in our path wonderfully cute animals or make us gain a lot of minutes on the Navigation System.”

It’s certainly an odd claim and indeed, Ultra Zook’s self titled debut will be one of the oddest things you’ll listen to this year. Not that this is a bad thing. Here at the subterranean, blast shielded headquarters of Echoes and Dust, one of my erstwhile colleagues described the album as “a children’s Zeuhl album, baby’s first avant prog record. It’s adorable.” Which on first hearing is a fair description, and you’d be forgiven for thinking the same with singing that varies between high-pitched yelping and the kind of sickening ‘goo-goo’ noises that emanate from new parents, while what sounds like Satan’s own devilish vibraphone player plonking away dementedly in the background.

You could think that.

But so to do misses some of the subtleties of this album. Yes, it does draw on the Zeuhl/Rock in Opposition blueprint, but don’t look here for any kind of Christian Vander style merciless bludgeoning. Ultra Zook finds inspiration also in World Music, Math Rock, French traditional folk, and – yes – Prog, but without being bound by any of the strictures of these genres. Like many contemporary French acts: Ni, Poil, Tractuer, this bunch of musicians make music that’s unique, and tear up any kind of rulebook into the process; drawing on the fresh and inventive tradition of (the much underrated) Guerilla Toss, and (the much fabled) Cardiacs. Those goo-goo baby noises hide some complex harmonies, as does any amount of demented playing. What appears deceptively simple, is nothing but.

Ultra Zook are Benjamin Bardiaux (Keyboards, vocals), Rémi Faraut (Drums, vocals) and Emmanuel Siachoua (Bass, flute, vocals), and boy, these guys can play, but – as is evident by the rest of the record – they know their way around a recording studio, and how to create a layered, textured, dynamic soundscape. There’s even bagpipes – what more could you want?

‘What Kind Of Juicy Fruit Are You’ kicks off the album, managing to express in about four minutes exactly what this band are about. The off kilter singing and playing is joined by glitchy electronics, and a deeply funky rhythm section – it’s angular, awkward music and manages to be more inventive than much of the Math rock you may have heard in the last year. Genuinely exciting and with The Fonk pushed to the fore (check out ‘En Veux Tu? En V’la!’ and ‘Frangipanier’ for more of the same), the band switch easily between this and the staccato, time signature melting lunacy of tracks like ‘Hmong Song’. Throughout the band maintain a naive, childlike playfulness, undercutting more serious musical fayre with the kind of electronic accompaniment that you’ll find in any electronic kid’s toy. ‘Espions Du Ciel’ certainly starts this way before being sucked into some terrifically frantic and dark EDM. ‘Kawani’ returns us to a Sesame Street meets Paul Simon number which seems rather throw-away, but it’s almost impossible not to be won over by it’s winning and wonderful joie de vivre. It’s certainly an album that gets richer the more you listen to it.

So, my dream is that this band represent France on Eurovision. But then I always wanted The Fall to represent the UK. Still, we can all dream can’t we. And also, what’s going on in France right now? Cos their experimental music scene has been turned up to eleven and is set to explode (indeed, the peerless Dur et Doux records has a hand in this very recording)…perhaps they’re using Brexit to sneak stuff out. Good on ‘em.

Anyway fans, check it out. You can also obtain the three preceding (and equally nutty) EPs from the group’s Bandcamp pages.