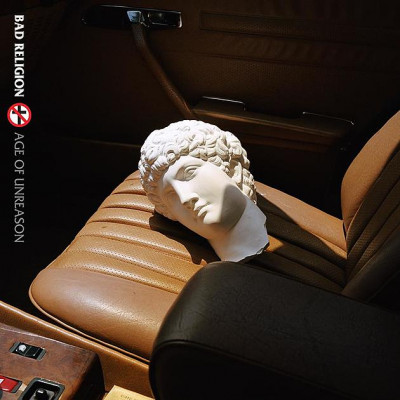 Age of Unreason by Bad Religion

Anyone who knows anything about punk is likely to also know something about Bad Religion. The now six-piece from Los Angeles California have been going for nearly forty years, racking up sixteen studio albums which have sold over five millions albums worldwide. Known for the intellectual socio-political commentary that is a constant presence in their lyrics, it is arguable that their seventeenth release could not have come at a more relevant time, and indeed its title Age of Unreason tells us before even listening to it that those same themes that have characterised Bad Religion’s career will be back in full force here. Not only is there some pressure on Bad Religion to deliver at such times, there is also added intrigue due to the fact that this is the longest gap between releases in their history, having on put out a studio album since 2013’s True North. Nevertheless, the release of the two non-album singles ‘The Kids Are Alt-Right’ and ‘The Profane Rights of Man’ last year greatly whetted the appetite among their fans for a new album and gave a clear statement of intent from the band going into 2019.

In typical punk fashion, Bad Religion waste absolutely no time getting into things as the frantic drums beats and guitar intro kick in for the album’s lead single ‘Chaos from Within’. Anybody who doubted whether Bad Religion may have gone soft or would be lacking in enthusiasm after such a long gap between album will have had their minds immediately put to rest; as this song is as angry and engaging as anything from their previous work and brings an immediate relevance to this album with singer and lyricist Greg Graffin getting to the core of one of the most pressing current issues in US politics in the border wall controversy.

This is followed by ‘My Sanity’, which shows the more melodic side of Bad Religion with the three-part vocal harmonies that have always made them stand out from their peers in the SoCal punk scene of the 80s and 90s, and offers a more introspective approach. Not that this lasts long however, as the thrashy guitars return for ‘Do the Paranoid Style’, which is another sign of how remarkably consistent Bad Religion have been over this time and also features the first of many solos on the album for lead guitarist Brett Gurewitz.

Following the three singles which start the album off, the quality of the rest of the album remains at the same high level of quality throughout. ‘End of History’ is another particular high-point both in terms of its ferocious intensity and the poignant intelligence of Graffin’s lyrics, while ‘Lose Your Head’ serves again to show a softer side to the punks and issue a warning about succumbing to hysteria as a result of the political climate. This measured approach to writing a punk album in the era of Trump is to be expected from Bad Religion and in many respects is both the album’s greatest strength and weakness. Evoking Thomas Paine in both the album’s title and the eponymous track not only emphasises everything that Bad Religion has stood for for decades, but it also demonstrates a desire to tackle the biggest issues facing the world with nuance, as well as a punk spirit.

On the other hand, the overall impression of the album, although incredibly positive, is that there could have been more than Bad Religion could have offered in such a context. As good as the album is, it is not without some flaws, as Graffin’s vocals are not quite what they used to be and there is not a track on there that is likely to have the staying power of some of their big songs from the 90s. Apart from lyrics which cement the album in our current era, there is not a great deal to separate Age of Unreason from many of their sixteen albums to have been released previously. That said, Bad Religion have always set an incredibly high standard, so the fact that do not deviate from that standard here is to be commended. The album is full of exquisite hooks, terrific rhythmic intensity and memorable lyrics which will satisfy any fan of Bad Religion or alternative music in general. It also serves as an articulate commentary on the world around us and is a solid effort by the veteran punks.