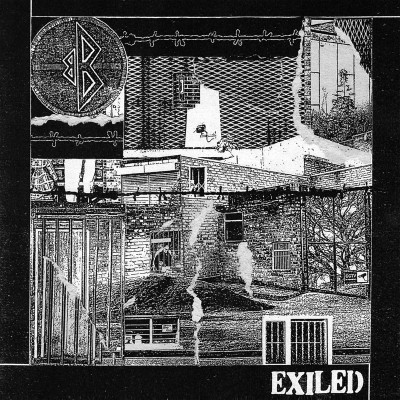 I was alerted to Stevenage art activist collective Bad Breeding about a year ago by John of Girls In Synthesis, in an interview he commented “I love Bad Breeding, they’re the best group I’ve heard in years. They’re a lot more hardline that us, both musically and lyrically, but I’m from a similar suburban area of Hertfordshire as them, so I identify with the way they project their frustrations”(1). Obviously a man who knows his music! Bad Breeding released their first album, S/T, in 2016, then Divide the following year, an EP Abandonment followed in 2018 and their eagerly awaited new album Exiled is out on 21 June.

The band made three tracks available on Bandcamp pre-release, each track part of a statement of resistance, but more than than a statement of resistance, ‘a call to arms’(2) in the continuing class war being waged by the rich against an already battered working class. Taking elements of hardcore punk and making it fit for purpose. Bad Breeding are not about reproducing punk’s posturing; they know the difference between rebellious and revolutionary. Approach Bad Breeding as a radical art collective rather than conventional band, more in the line of Henry Cow, Crass, Gnod and the aforementioned GIS. Their releases are multidisciplinary art(efacts) not just albums, constructed and presented to facilitate the reader/viewer/listener in their political journey, a wakeup call to those lulled by the soporific effects of late capitalism’s ‘spectacle’.

Neoliberalism’s greatest trick is its anonymity and its excluding of discussion of alternatives from the mainstream, to quote Mark Fisher (quoting Jameson/Zizek) “It’s easier to imagine an end to the world than an end to capitalism”(3)…except Bad Breeding can! Their releases are structured to be both material for, and an avenue into, meaningful political conversation and action around radical left alternatives to ‘what is’.

Exiled lands in a UK that, to quote Peter Garrett of Midnight Oil, is in “interesting times”, I’d say ‘interesting’, is a euphemism for ‘shit’. Like Thatcher on speed the last nine years of Tory government has seen increases in poverty, inequality, homelessness, child poverty, the underfunding of public services and, according to the UN, systematic breaching of the human rights of the disabled(4). In a recent interview Chris Dodd, singer with the band, commented about the new album, “Exiled is very much a document of the impact of neoliberalism on a working-class community. It was written during a period in which calculated austerity measures have continued to bite with a prolonged intensity – you think of reaching a ‘breaking point’ but it never comes, we just keep hitting new lows of poverty and degradation and sucking it up…Our town (Stevenage) is a real victim of a global, systematic inequality – the rule not the exception. Lyrically it’s blunt in its description of material working-class concerns and is something that spells out the impact austerity has had on our community, as opposed to where the individual fits into the stifling mess of late capitalism”(2).

Exiled is 12 tracks of compassion fueled fury, anger at the deliberate construction of suffering and immiseration but it’s never black, there is always hope and optimism laced though, born of the bands involvement with grassroots activism, resistance and solidarity. Recorded by Ben Greenberg of Uniform (who Bad Breeding tour with in July) the album starts with ‘Exiled’, a ferocious hardcore track. “Exiled, but choked for all to see. And I used to dread the thought of trauma, now it circles every day. Waiting in the wings, prowling like a stalking horse. See nature knows of hardship… at least it has its use. This is suffering as a construct – man’s longest-running gag”.

Next track up ‘Repossession’, chilling. Somehow the combination of music and vocals communicates the sense of fraught anxiety that pervades the lives of those pushed to the edges of precarity. ‘Raking Through the Screed’, is hardcore at it’s best as Dodd confronts the condescending pity of liberal poverty tourism; “Shallow badges squeeze my plight. Preening tourists line the sides. Damp in the ceiling, mould spored and grey. Raking through the screed”.

OK, did I say ‘Raking Through the Screed’ was hardcore at it’s best? This is equally good! Good partner track to Test Dept’s ‘Landlord’ as Bad Breeding go for private landlords and their exploitation of those forced into the private rented sector in ‘Clear Blue Water’. “It started with a shake down, one-up sport. Now I do my work with faux cross in hand. Spend my nights laughing at the blighted flats. Shine ‘em up and flip ‘em around. A quarry blessed by blinkered fools, our prize the labour of provincial scum from stove, to mattress, to grave… Swimming in the clear blue water”.

Next track up is one of the pre release tracks ‘Whose Cause?’. Chris Dodd commented that the track “explores political misdirection in the media and its role in sowing seeds of division, suspicion and distrust in our communities by using identity as a means of fear”(2). The video is worth checking out too. Precarious work, zero hours contracts, the devastation of war, homelessness, (with both ‘Theatre of Work’ and ‘A Rag Hung Between Two Trees’ shot through with intense unsettling saxophone from Lewis Evans), and police brutality in ‘Breaking Wheel’; “One more head to the pavement. Keeper of nothing but yourself. When pressure fails, call on the boot. Distrust cloaked by just pursuit. Approval in only the thin and blue. Keeper of nothing but yourself. Violence and intimidation, the only measures of your control”.

The album ends with ‘Tortured Reality’; intense, exhilarating, anxious. “Thinning walls part sense and hysteria. The tired cling to the gloss of nostalgia. There is comfort in the spectre of nation. Gather the weary running blind. No war pure enough to peel the wool from their eyes. But for all your books built on blood, have you ever had to count the bodies?”.

If you can imagine G.L.O.S.S fronted by Paddy Shine with lyrics by Mark Fisher you won’t be too far out; Exiled is an extraordinary piece of work. Album artwork by Nicky Rat.