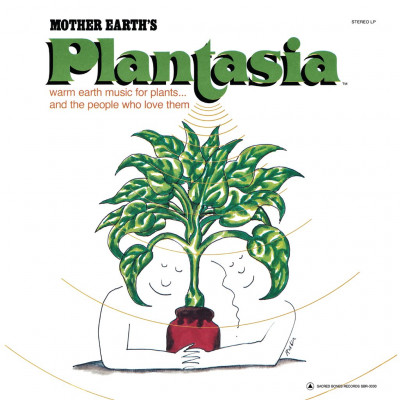 1973’s book The Secret Life of Plants is supposed to have brought about a houseplant bonanza on par with other seventies trends like the pet rock, Farrah Fawcet hair, and very wide legged pants. The decade leading up to the 1970s also delivered a slew of electronic albums that made use of the emerging technology of the analog synthesizer. Composers like Raymond Scott, Wendy Carlos, Beaver and Krause, and Mort Garson expanded the horizons and created a nascent electronic music vocabulary based in the exploration of analog synthesis where oscillators and filters stood in for keyboards and guitars. Albums, like Carlos’s Switched on Bach, brought electronic music out of experimental academia and into the popular consciousness; a move that bands like The Who, Pink Floyd, Yes, and Emerson, Lake and Palmer would take to the heights of popular music. By the mid-1970s these bands had made the synthesizer an iconic part of popular music culture. But quirkier things were also on offer.

Mort Garson is one of those quirkier elements to emerge in a music culture that allowed for a certain kind of progressive eccentricity. Educated at the Juilliard School, Garson cut his teeth as a session musician, arranger (most notably for Glen Campbell), and producer, and went on to become an early adopter of the Moog synthesizer when he encountered Robert Moog and his device in 1967. Garson put out several Moog inspired electronic albums throughout the 1960s and early 1970s, including The Wozard of Iz: An Electronic Odyssey and Ataraxia: The Unexplained (Electronic Musical Impressions of the Occult). Operating from the esoteric claim in the Secret Life of Plants that plants dug music, Garson composed a suite of songs for plants to listen to, privately pressed the album, and gave copies away to purchasers of Sears products and plants in Los Angeles.

Plantasia wasn’t a smash when it was released, but the years were kind to it and original copies can fetch prices in the hundreds of dollars and bootlegs have abounded. This reissue from Brooklyn’s Sacred Bones is an official vinyl release and will no doubt expand the audience for Garson’s synth odysseys. This uncovers an interesting conjunction that the analog Moog synthesizer, which at that time was an emergent technology, and plants, could have a symbiotic relationship in which plants, naturally, were connoisseurs of synthesizer music. Thus, you and your plant, could enjoy “warm earth music”.

And this is enjoyable music for humans and possibly plants of a quirky, melodic synth type that you rarely hear in contemporary electronic music. Rather than drones, noise, or beats you get unabashed melody that is anchored in what are Garson’s considerable arrangement chops that play with familiar forms such as lullabies, blues, and etudes. Occasionally, these veer into a silly territory (‘Baby’s Tears Blues’ and ‘Swingin‘ Spathiphyllums’) but overall the music remains interesting and engaging. What is really astounding is Garson’s facility with the synthesizer and his ability to coax interesting tones and a variety of pitches which somehow come across as organic and warm and maintains a happy and cheerful vibe throughout. What we end up with is a record of short, concise, well composed songs that feature the possibilities of a purely electronic music that are reminiscent, but not exactly like, contemporary synthesizer explorers like Tangerine Dream, Brian Eno, and Ash Ra Tempel, but also looks forward to explosion in the 1980s of synth pop and 8-bit video game music.

This was Garson’s last album, though he continued to make music. Plantasia’s reputation grew as both a soothing stoner album that was also a pioneering synth record. It’s official release is a welcome addition to the history of electronic music and Garson’s discography.