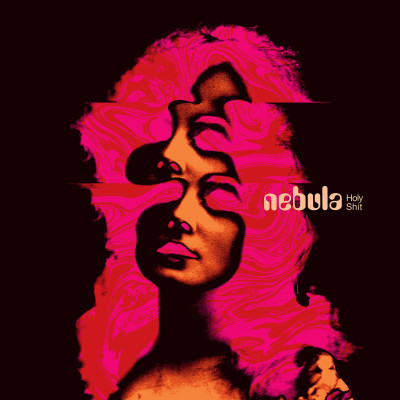 You don’t know what you’ve got till it’s gone, as they say. Catching Nebula at Desertfest last year, the newly re-assembled line-up provided an unexpected highlight of the weekend. They were raw, they were ragged, but they were magnificent.

I’m not sure what coaxed them back out of hiatus, but it turns out that gig wasn’t a one-off wish fulfilment for the Desertfest tribe and and they have returned to touring and yes, recording, with this here Holy Shit. It’s good to have them back.

Now, Nebula sit pretty high up in the stoner rock family tree and they share some things that other originators also had – a sense of danger, an air of nihilism and bad, bad intentions. As Monster Magnet said on the sleeve of Spine of God – “it’s a satanic drug thing, you wouldn’t understand”.

Those early bad vibes are recalled on Holy Shit, which rejects the cartoonish, non-threatening comfort zone of so much modern stoner rock and reconnects with the dissolute, nasty junkie, mind-set of the angry-ish young men that birthed the genre.

Opener ‘Man’s Best Friend’ starts with some suspicious sounding inhalations and isn’t about a dog. “All praise be to Lucifer” are the first unholy words sung by mainstay Eddie Glass as the song bounds along with eager evil intent. Surprisingly, the song is more like a classic metal gallop than a sleazy groover – the song having as much in common with The Necromancers as it does Fu Manchu or Sleep. It does then chill and go all psychedelic with backward masked sonics for a while, before heading off with manic soloing on that galloping rhythm into outer space.

More in-keeping with the holy part of the album title is ‘Messiah’, which is a more classic stoner anthem. However as Glass rasps “Oh messiah, oh my sweet lord” atop wickedly fuzzy Sabbath-ian riffs I am not convinced he’s singing about Our Lord Jesus. Whereas ‘The Cry of a Tortured World’ that closes out the album is possibly a lysergic hymn to a dying planet, with roving, questing bass by Tom Davies and fragile, high pitched and sighing vocals from Glass. It seems on mission to discover inner peace, somehow. Mostly though, Nebula sound pissed off and antagonistic.

The album hits one if it’s peaks on ‘It’s All Over’ – a space rock tinged heavy blues. When the chorus hits, along with a huge sluggish riff, you will be nodding your head like a stoned freak. The atmosphere of the album is so gleefully narcotic and villainous, it’s like a demon on your shoulder, urging you to submit, fuck the straight world, join a cult and smoke crack for Satan.

The other peak is ‘Let’s Get Lost’ – not the jazz standard made famous by Chet Baker, obviously – this one is less romantic…”Let’s get fucked up” rasps Glass on a wild, grungy, Stooges-esque punk howl. It’s less a song than a noisy tantrum and is a thrill, thrill, thrill.

So far, so far stoner, right? Well, Holy Shit does contain one curveball in ‘Fistfull of Pills’, a brief but startling mix of latino and surf rock: think ‘Miserlou’ meets Robert Rodriguez marvellous Chingon. It breaks up the angst and misanthropy in a most delightful way.

In truth, for all the aforementioned highlights, this album does drag in parts, especially during the second half, and a couple of tracks outstay their welcome. However, the good dramatically outweighs the bad and Holy Shit in no way tarnishes the legacy of one of the greats on the stoner rock genre. I can’t wait to hear them rip through some of these tracks live later in the year at The Underworld.