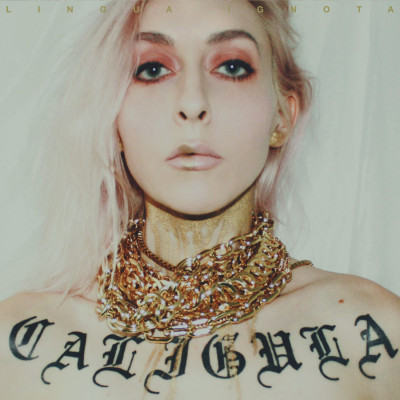 Fresh off a blistering set at this year’s Roadburn Festival, fearsome industrial experimentalist Kristin Hayter, a.k.a LINGUA IGNOTA, is back with her third studio album Caligula. Bigger and more grandiose than its predecessors, Hayter has brought even more bile, spite and venom to bear to terrify and empower the listener in equal measure.

The choral opening number ‘FAITHFUL SERVANT FRIEND OF CHRIST’ could have been ripped from the Pope’s fever dreams. Synths and strings slowly crescendo, while Hayter’s clean vocals soon become a choir of themselves, reverberating in a potent manner. It should feel triumphant – the lyrics are simple: “FAITHFUL SERVANT, FRIEND OF CHRIST/MOST GLORIOUS AND HOLY LIGHT/BOW BEFORE UNENDING NIGHT/MOST GLORIOUS AND HOLY LIGHT.” This could be the soundtrack to Christ’s ascent into Heaven, if it weren’t for the unending night that covers the Earth. Instead, it becomes a choir of demons rejoicing in his descent into Hell by aping that heavenly choir, the trailing strings at the end cementing the dissonance of a deeply unsettling song.

Unsettling is the name of the game on Caligula – and across Hayter’s work in general. From the all-caps format of her titles and lyrics to the caustic dissonance of her compositions, she is not here to make the listener comfortable. Going straight for the jugular, she brings the horrors of issues like domestic abuse out of the darkness into a stark spotlight. Take the lyrics of ‘MAY FAILURE BE YOUR NOOSE’, for example: “WHO WILL FUCK YOU IF I DON’T?” is a question plenty of sexual abuse victims have heard in their lives, designed to destroy their self-confidence until the only person they can cling to is their abuser. However, Hayter takes that situation and turns it Carrie-style on its head: the narrator of the song burns everything down around her, singing “Everything burns down around me” as it does so. That lyric repeats from 2:30 to the end of the song. Initially, it starts off being sung delicately, almost mournfully; the victim lamenting how her life has burned down around her. But with a sudden burst of static-infused orchestral music, the narrator turns instantly from unfortunate victim to vicious, triumphant arsonist. She has reclaimed control of herself, and is turning her abuser’s home into a patch of scorched earth.

As noted in an interview in The Guardian, “Lingua Ignota is not just about catharsis, but also transformation and retribution.”1 Retribution, perpetrated against abusers and their enablers, is arguably the strongest theme of Caligula. The lyrics of ‘DO YOU DOUBT ME TRAITOR’ point a direct finger at such people: “MY FRIENDS ALL WEAR YOUR COLORS/YOUR FLAG FLIES ABOVE EVERY DOOR/BUT BITCH I SMELL YOU BLEEDING/AND I KNOW WHERE YOU SLEEP.” This highlights how isolating it can feel to be a victim – friends of the victim can often be blind to, or worse complicit in, the suffering being inflicted by the abuser. But see the explicit threat – the abuser is bleeding and like a shark, Hayter is coming to devour him.

Possibly the only song that doesn’t deal with such themes is ‘DAY OF TEARS AND MOURNING.’ It’s the only song I’ve ever heard that puts the anger stage of grief front and centre. The lyrics literally read “[INCOMPREHENSIBLE SCREAMING]” – yes, even a lyric-less song is written in all caps. The song opens with a mournful church organ, and soon enough, Hayter’s incomprehensible screaming comes in, accompanied by guitars and drums distorted with harsh static. It is pure anger. A day of tears and mourning is a day of grief, and certainly grief comes with weeping and mourning. But speaking as someone who buried both his parents before the age of 27, grief also comes with an incomprehensible amount of anger. Sometimes, it can only be expressed through screaming. Grief is not just for the loss of those we love, however. We can grieve for the time lost to an abusive relationship, the love squandered on those who do not love us in return, the effort wasted on a failed goal – any number of things can cause us grief. And one thing not often shown in artistic portrayals of grief is how angry it makes us. It is thus refreshing to see it expressed so prominently, so noisily, so angrily here.

All this anger, these fearsome lyrics, the spiteful wrath that Hayter personifies, is accompanied by some of the most dissonant, discordant noise outside of a Gnaw Their Tongues album. The distorted static Hayter creates goes beyond the feeling of nails on a chalkboard – this isn’t just a sound that cuts through the listener. This is a sound that decimates. It is then layered over delicate piano motifs, church organs, and thunderous drums to create a truly nightmarish melody. But there is a beauty in it, namely that of catharsis. Not the ‘having a good cry’ kind of catharsis, more of the ‘burning your ex’s love letters’ kind – or more accurately, seeing your abuser sentenced to jail kind. The music wrings out all your negative emotions at once until, like hope found at the bottom of Pandora’s Box, only relief is left to pour through you when the music stops.

The only bum note in the entire album is the weird vibrato on ‘SORROW! SORROW! SORROW!.’ Hayter draws out the repeated word “sorrow” almost to a chanted drone but in so doing, whether it’s a side effect of having it reverberate or whether it’s to do with how her voice sounds when singing such a long note, it sounds odd. A vocal coach might be able to pinpoint exactly why, but it sounds off. Beyond this one aberration, her clean vocals are as strong as they’ve ever been, and her howls and growls more caustic than ever.

Woe betide anyone who incurs Hayter’s wrath. Just as much an empowering statement of intent towards any and all abusers as it is a cathartic listen, Caligula is an excellent third album. It’s a superb follow-up to the two released in 2017, and a promise of equally great things to come.