(((O))) Review: Down I Go – All Down the Church in Midst of Fire the Hellish Monster Flew, and Passing Onward to the Quire, He Many People Slew 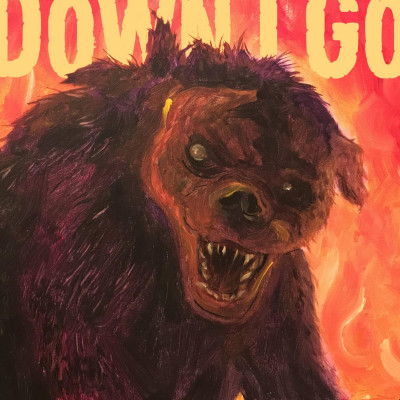 All Down the Church in Midst of Fire the Hellish Monster Flew, and Passing Onward to the Quire, He Many People Slew by Down I Go

Whilst a certain band is taking a longer than should be reasonably expected to release a new album you maybe wondering what else is happening in the world of heavy music. Well, certain bands like London’s Down I Go, can happily knock out surprise EPs between their major releases. Not only that they are also pushing several boundaries as they go (as well as vying with Gnod for the longest album title ever). The band’s last full length album was created during an artistic residence on an Icelandic farm, the latest EP All Down the Church in Midst of Fire the Hellish Monster Flew, and Passing Onward to the Quire, He Many People Slew was a DIY affair, tracked and jammed across two continents.

Those familiar with the band’s music will know that a lot of the music is based on mythology and folklore, All Down the Church… is no different in this regard. The opening track ‘Gashadokuro’ is based on Japan’s giant, indestructible, man-eating skeletons. It’s familiarly chaotic, chunky guitars and Pete Fraser’s oddly melodic screams. Just to keep things interesting a haunting sounding saxophone breaks up the song before the whole thing soars to a short crescendo. The second track, ‘The Kumakatok’ based on the three hooded figures from Phillipino folklore who apparently are harbingers of death. It is a surprisingly upbeat track, considering what the source material is, well it starts that way before ending with screams of “open the door”, which is genuinely unsettling. The ability of Down I Go to turn in a split second from upbeat and almost poppy to brutally heavy and catch the listener off-guard is wonderful. The members evidently understand each other well because despite the chaos and the lack of them all being in the same place and at the same time the tracks are cohesive and well-crafted.

‘Black Shuck’, named after a ghostly black dog which is said to roam the coastline and countryside of East Anglia in the UK. The track, on first listen, bounces along nicely, dig a bit deeper and the lyrics have a dark, nursery rhyme feel (for those who didn’t grow up in the UK, a lot of the children and folk songs have very dark origins, the Black Plague and ‘Bloody’ Queen Mary I spring to mind). To finish off ‘Santa ‘Muerta’, named after the skull-faced Mexican patron saint of death. Starts with a catchy guitar hook and Fraser’s pleading to the aforementioned saint. A fuzzy bass picks up the pace and Fraser’s familiar howl piece the track. Suddenly, the track transforms with a rather lovely chamber-esque section before the band pick up where they left off and ending with a screamed impassioned plea.

Down I Go have produced something rather wonderful, though it feels a long way from darkness and raw power of You’re Lucky God, That I Cannot Reach You and the rawness of Mortals the elements are all there, the ability to change a song in a split second, the duality of melodic clean and vocals and raw screams but All Down the Church… takes a bit of different direction. It’s melodic in places and raw and edgy in others. The band take inspiration from all over the world and put their particular spin on it. It’s flawlessly carried out and a refreshing change from a lot of, shall we say, predictable, more of the same old, same old that passes off recently. The band say that they wanted to “record sounds nobody has ever made” and I’m fairly sure they have done just that. The only shame is the band are spread across three different countries and a live show is probably unlikely.