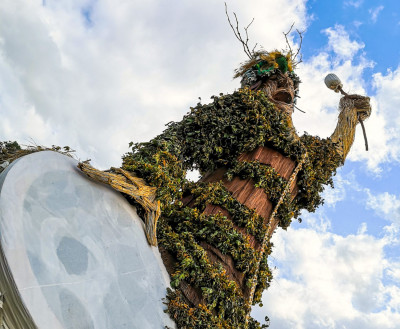 There is an air of change afoot in the Black Mountains of Wales – Green Man Festival is evolving, and as result, is attracting a new type of clientele. What is usually a folk/indie thronged affair is now becoming more inclusive to big name acts like Four Tet who push the boundaries of electronica, or heavier bands like Pigs Pigs Pigs Pigs Pigs Pigs Pigs. That said, the same feelings of togetherness and acceptance remain. In fact, they may be stronger than ever.

Cardiff-based groove champions Afro Cluster provided the perfect introduction to the weekend. Frontman Skunkadelic gave an explosive performance moving frantically about the Chai Wallahs stage to successfully engage a very willing crowd, while the brass section and bass guitar weaved together and wriggled apart, injecting deep shades of colour and tongue-tantalising spice. The group have been teetering on the edge of something big for years now, and as the audience begged for one more song, it felt like Afro Cluster are finally ready to have their time in the spotlight. Watch this space.

The Walled Garden stage is a favourite spot of ours. Nestled away in a beautiful old courtyard, it becomes an intimate space for stunningly talented artists to connect with listeners. One such artist is Belgium-based Tamino, who blessed the audience with his finely crafted beautiful melodies and rich rhythms. The young writer and singer embraces his Egyptian and Lebanese roots, which are clearly reflected in his music, though his lyrics are in English. A flawless performance was characterised by sublime vocal runs cutting across drums and keys that were full of detail yet subtle in nature. 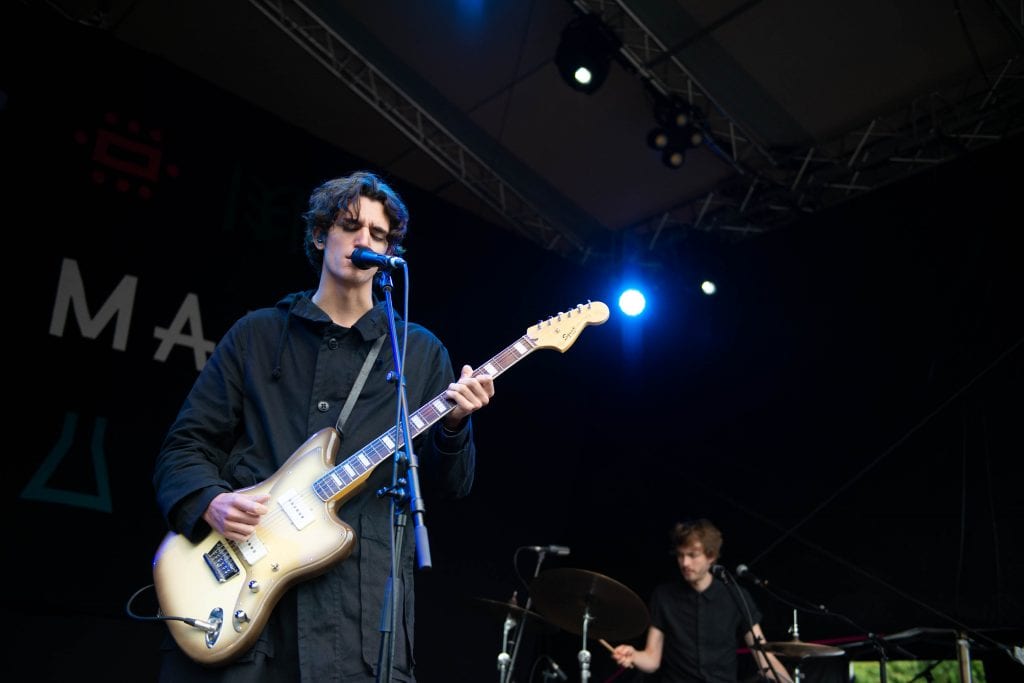 Tamino on The Walled Garden Stage. Photo by Marieke Macklon

The subtly of Tamino couldn’t have been much further from the next act – the melt-your-face-off Pigs Pigs Pigs Pigs Pigs Pigs Pigs, who tore the roof off Far Out stage. The northern pysch/grunge outfit have come a long way since releasing their debut album in 2017, and are now a firm favourite among live music lovers. They provided a bellowing kick up the arse to an otherwise relaxing Friday evening.

Out from under the safety of the Far Out tent, the rain lashed down as Whitney took to the Mountain Stage – an unusual band with an unusual set up. Frontman Julien Ehrlich positions his drum kit centre stage, with a vocal microphone falling from above. His solemn lyrics cover the themes of lost loves and heartbreak, yet are delivered by a wonderfully controlled falsetto. They are paired with jangly guitars and bouncy keys, making for a delectable juxtaposition that somehow gels and is hugely infectious. We stand in wonder – it is truly mind blowing to see Ehrlich accessing separate parts of his brain to play drums while simultaneously hitting those high notes. The performance is superb, and makes the relentless downpour somewhat easier to cope with.

Back in the courtyard, Ex:Re took to the Walled Garden and delivered one of the most intimate and moving sets of the weekend. With crushing lyrics and delicate melodies, a soggy audience stood transfixed before frontwoman Elena Tonra – the mastermind behind both Ex:Re and Daughter. Her new band members tiptoed in the background before blasting into life at just the right moments. The wonderful Daughter are expected to make a return after a hiatus, but we hope Ex:Re continues to bless the musical world with many live performances and releases to come. 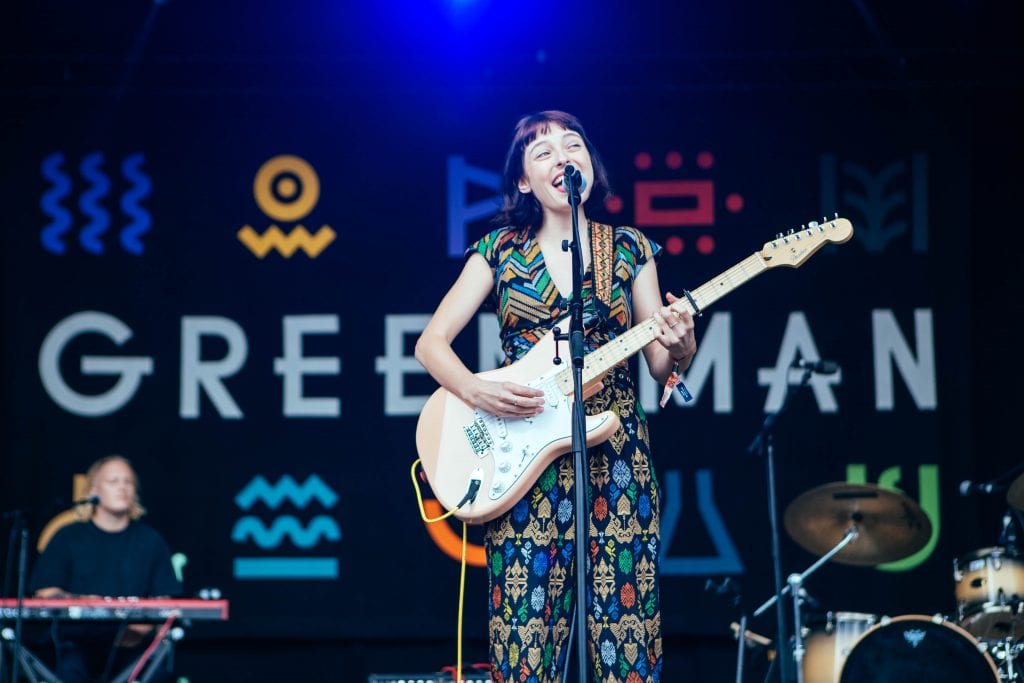 Stella Donnelly on The Mountain Stage. Photo by Chris Almeida

Sunshine brought much needed relief on Saturday. And with it came a host of amazing artists, the first of which was Stella Donnelly. She offered up another incredibly intense performance on the Mountain Stage. The topics that Donnelly addresses in her music are extremely heavy and can be tough to hear, but tracks like ‘Boys Will Be Boys’ and ‘Old Man’ must be listened to by all. They are not only sublimely written and performed, but also deliver vitally important messages. And while the seriousness of her lyrics reverberated, Donnelly’s infectious laugh and sharp wit had the audience in stitches between songs. She also played a secret set to those that were lucky enough to spot her at the merch tent later in the day, finishing on a hearty rendition of Cyndi Lauper’s ‘Time After Time’.

Having performed one of the stand-out sets of Green Man 2017, The Big Moon were back with a bang to hit up the Far Out stage. The four-piece played through old favourites such as ‘Formidable and ‘The Road’, and took the opportunity to gauge a packed crowd’s response to new material on their upcoming sophomore album. Confidence ran high, each member executing their individual parts with more conviction than two years ago. The set closed with a stage invasion from a group of postwomen and postmen, and a surprise marriage proposal to frontwoman Juliette Jackson. She gleefully accepted.

Big Thief fans may have initially been confused by Adrianne Lenker’s luminous wig and drawn-on facial hair as they took to the Mountain Stage, though her unmistakable energy and stage presence were quickly unveiled for all to witness. The bands’s music and its messages, ranging from the destruction of the planet by humans to the feeling of being unable to call anywhere home, are perfectly paired with the theme and feel of Green Man. The extended guitar in the band’s latest single ‘Not’ was otherworldly, as was the achingly beautiful and gentle ‘Terminal Paradise’. In fact, every moment of the set was stunning. Big Thief are simply on fire – the band released their third album titled U.F.O.F in May 2019 (my top release of 2019 so far), and have recently announced that their fourth album will follow hot on its heels, set for release in October 2019. 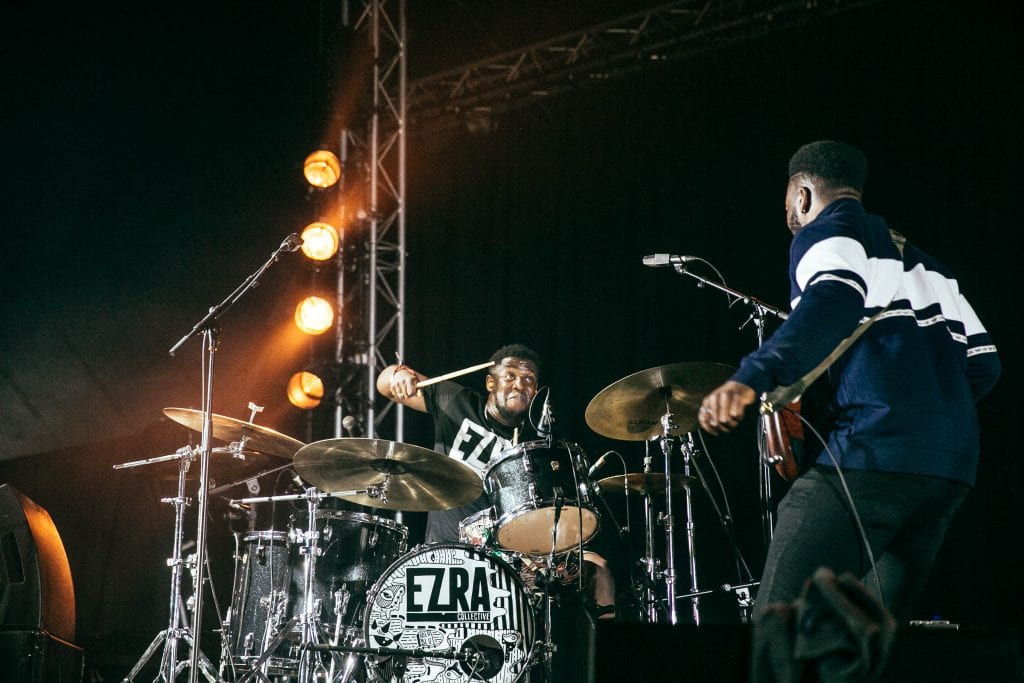 Ezra Collective on the Far Out stage. Photo by Kirsty McLachlan

A difficult choice had to be made on the final night of the festival as the wonderful Ezra Collective clashed with Sharon Van Etten. It was the former’s second-ever show in Wales, after having performed years ago at Cardiff’s much-loved and now closed Gwdihw Café Bar. And for those who had waited, Ezra Collective did not disappoint. Their set was a furious tangle of pounding drums and brass. Onlookers were dumbfounded as these master musicians showed their craft, grinning from ear to ear.

We also managed to catch some of Sharon Van Etten thanks to the fact that distances between the stages remain short, despite the growing popularity of Green Man. She commanded the Mountain Stage with the boldness and certainty of a seasoned headliner. Her ability to write and perform soft ballads such as ‘Every Time the Sun Comes Up’ before instantly transitioning into the raw power of ‘Seventeen’ is frighteningly brilliant to behold.

The festival has become noticeably busier when compared to a few years back. The fields of long grass are usually relatively quiet on Thursdays, while Friday morning tends to mark the arrival of new tents that disorientate the late risers. Yet space was at a premium from the get-go, causing some attendees to set up camp on walkways and almost directly on top of neighbours. Queues for toilets, showers and food stalls were also longer, though getting a gorgeous pint of local beer somehow remained easy peasy.

Despite all this, seeing two acts in quick succession is still possible, and that’s most important. And while the target audience is growing, Green Man remains a gathering of like-minded, wonderful people – people who care for others, care for this earth we live on, and care for the utterly gorgeous music and art that makes the festival so special.