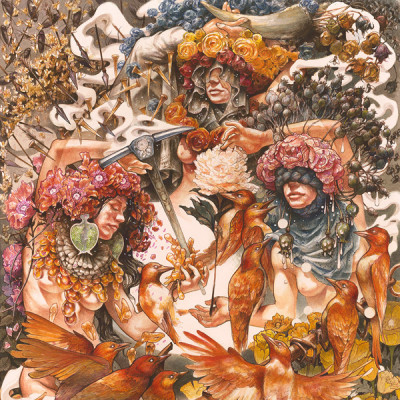 A release of a double album by a band like Baroness is always going to be both, musically and emotionally, complex and challenging. For one, like fellow South Eastern American metallers Mastodon, Baisley’s troopers revel in eclectic musical influences while they pursue their song-craft with an artful sophistication and a progressive tendency. Then, add into the equation the devastating crash of their tour bus whilst on a U.K. tour in 2012, which left John Baizley requiring screws, foot-wire, and staples to repair a very badly smashed arm, left the members of the band with severe mentally deep scars.

Roughly a year later, Matt Maggioni and Allen Blickle parted company followed by Peter Adams in 2017, that left Baizley the lone original member. It was a remarkable achievement of determination for Baizley not only to play guitar again, but to persevere and re-build Baroness at various stages, which now stands as Sebastian Thomson (drummer), Nick Jost (Bassist) and for fifth album Gold & Grey is the debut for newest recruit, guitarist Gina Gleason.

Gold & Grey is a sprawling seventeen tracks long, and along with the quite stunning Baizley designed artwork, I would recommend vinyl to be the best format to experience the whole package. It is also the best way to break down the album into easier sizable chunks because to take it all in one go on say, a CD or in my case a digital download, is rather a tall challenge. It has been a long process to absorb all what Gold & Grey offers, but it mainly has been worth spending a considerable longer amount of time listening to an album for review than I normally do.

The opening five songs are excellent examples of Baroness at their finest. Opener ‘Front Toward Enemy’ pumps out purposeful heavy twisty bass and nifty riffage, while Baizley fore-warns ‘’I’m heading for disaster.’’ ‘I’m Already Gone’ is the album’s immediate highlight with another standout bass line and a chorus of upmost beauty. ‘Tourniquet’ continues with another example of intelligent song-writing, starting with acoustic guitar before it chugs into action and expands out with gorgeous fingerpicking guitar play, which highlights Baroness’ greater depth and uniqueness. It reveals the latest formation is cooking as a tight, impressive, creative unit. While John Baizley’s delivery of vocal style – his phrasing style does remind me a lot of Manic Street Preachers James Dean Bradfield – packs huge intensified emotional punch throughout.

For a while afterwards, Gold & Grey swings back and forth between faster tempo rousers like ‘Throw Me An Anchor’ and meditative mood pieces like ‘Anchor’s Lament,’ ‘Blankets Of Ash,’ ‘Emmett–Radiating Light’, which to listen to singularly out of context from the album would be pointless, and these consequently are the least rewarding although they do maintain the seriousness of mood. Then there is ‘I’d Do Anything’, leading off with haunting sparse piano, before Baizley pours out his heart in gut-wrenching fashion, “I am selfish, I am wrong. I’m scared to be alone.” It is arguably their bravest song to date. Though, to be honest, the same could also arguably be said about the album itself.

The last section of the album has a couple of short, and throwaway, experimental electronical noodlings, ‘Crooked Mile’ and ‘Assault on East Falls’. I do think these were unnecessary inclusions. However, these are interspersed with the thick chuggy riffage of ‘Broken Halo’, and a Baroness trademark sounding ‘Borderlines’, before the closing ‘Pale Sun’ and its exploratory sound-wave atmospherics brings to mind Radiohead’s Kid A.

If there was a rock/metal Mercury Prize award equivalent, then Gold & Grey would be a prime contender. It is not an easy listen and requires time spent to mull over the many textures and the openly profound lyrical content. After all, it is an album which has tragedy and the consequent emotional complexities that follow at the heart of its creation. One can only hope it is a successful catharsis for John Baizley in his continuation for emotional healing.