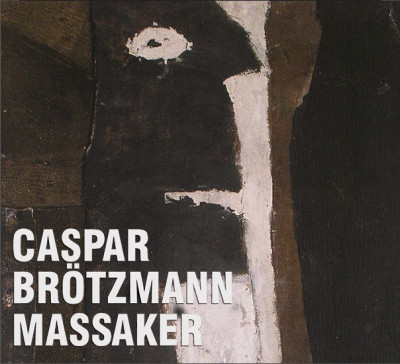 I recently saw Sunn O))), the undisputed Kings of drone metal, performing in London and it’s difficult not to keep mentally referring back to that show tonight, especially given that tonight’s headliners are their support elsewhere in Europe. While Caspar Brötzmann recalls Sunn O))) only in a very tangential manner (as an experimental guitarist albeit in a different vein to Stephen O’Malley), tonight’s support, one-man experimental guitar soundscapist Kowä Axis (James Barry), is doing something similar. Using a left-handed Jagstag/Mustang (I think) with custom pickups, our man exudes tenebrous and tremulous carpets of sustained distortion. Plugged into three stacks, huge in size and volume, even a slight movement of the body can subtly alter his tone, let alone lifting the guitar into the air, and his pieces becomes shaped by warm swells – bursting suddenly and leaving even Barry himself looking surprised. There are points that recall a kind of very slow Queens of the Stone Age where murky power chords are broken up by off-kilter unison bends. He’s lifting the guitar-bridge to create weird out-of-phase sounds, subtly controlling screaming feedback, juddering the drone-wall into reverby silence, and executing extra layers of thickness via pedals. The most distinctive moments are when the drone-wall is womb-like, low and cavernous, like an instrumental Trepaneringsritualen, like Sleep continually just about to start, or like Sunn O))) finally just about to trail off into ear-ringing silence. Kowä Axis is for listeners who enjoy the physical effects of extreme volume and the radical, unpredictable nature of freeform noise experimentation.

It’s difficult not to be slightly awed watching Caspar Brötzmann perform, especially alongside his band Massaker, with Saskia von Klitzing on drums and Edu Delgado on bass. Recording and performing since the late 1980s, Brötzmann is one of those guitarists who is little known outside of the experimental underground, yet preempted so many styles that are seen as quintessential to popular guitarists (I’m looking at you, Tom Morello and Matt Bellamy). You could take almost any few seconds of Brötzmann’s playing and find sounds that have launched entire sub-genres and independent musical styles. In no particular order, I can hear Brötzmann in Sleepy Time Gorilla Museum, The Jesus Lizard, Metz, Shellac, Lightning Bolt, The Mars Volta and plenty more amazing alt/noise/psych rock bands from the last couple of decades. Hendrix is perhaps his only real obvious influence, with some of Black Axis (1989) immediately evoking the wah-wah scratching funk of ‘Purple Haze’ – a sound that is so incredibly distinctive, woven into the fabric of classic rock music yet rarely actually emulated directly these days. But it takes someone like Brötzmann to bust it out and pull it off.

Tall, smartly dressed, Brötzmann – like Jimi himself –  cradles a left-handed Strat, creating shimmering atmosphere by tapping the headstock and gently clanging the strings behind the nut, building up reverb-heavy radiance before his band kicks in with brutal, metal-heavy rhythmic punches. It’s almost impossible to describe Brötzmann’s guitar style because, beyond a couple of power chords and swift snatches of melody, he relies so little on anything resembling standard guitar techniques. Constantly gripping his whammy bar, Brötzmann wildly dive-bombs chords, scrabbles scratchy patterns up and down the neck, clangs, taps, scrapes, executes frantic pulls-off and generally makes all of the sounds that would have your guitar tutor shaking their head in despair sound majestic and fascinating. Maybe it’s a bit like listening to your favourite alt-rock band backwards.

Brimming with ideas and innovation though Brötzmann may be, it’s Massaker that keeps all this grounded: amidst all of his sonic craziness, someone needs to be keeping time and providing a strong sense of development. Massaker are incredibly tight and solid, but never too tight or too solid – not afraid to keep it minimalist, playing just the right thing in the right place to extenuate Brötzmann’s wildness. Brötzmann’s gruff, tribal, chanted vocals are never going to steal the show, it has to be said, but again they help to make Caspar Brötzmann Massaker that rare thing: a highly experimental band that you actually want to listen to. Above all, all three of them are clearly thoroughly enjoying playing together, continually turning in toward each other for the changes, staying to smile, nod and laugh together. It’s no wonder that Julian Cope called them “The trio to end all power trios.”

If you’re remotely interested in listening to guitar music, do your ears a favour and go and see these guys right now (ideally supporting Sunn O))) ). Watching Caspar Brötzmann Massaker perform takes me back to my earliest experiences listening to rock music, and reminds me of everything that made the electric guitar sound so exciting in the first place – so dangerous, so limitless, and so utterly essential to living.