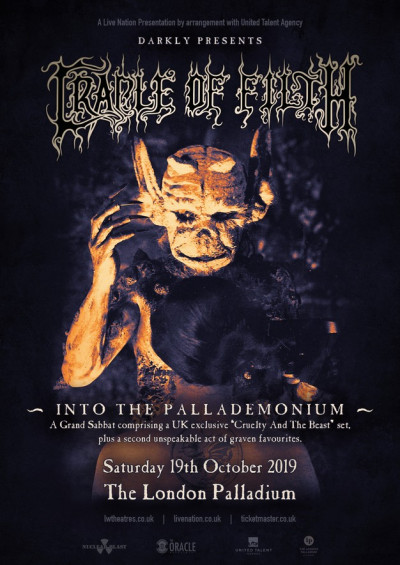 Cradle of Filth at London Palladium

During their excellent set at Bloodstock Festival earlier in the year Cradle of Filth made the announcement that they would play their third album Cruelty and the Beast in its entirety at a special show at the London Palladium. I knew at the time that this was a big deal, at least for those of us who aren’t pretending that we’re too cool and too kvlt to listen to Cradle any more. Not only is Cruelty an intricate and erotic extreme-metal concept album of the highest order, there is no more suitable or more unusual venue in the capital for such an occasion than the London Palladium. A beautiful grade II listed theatre in the West End, which once hosted Louis Armstrong and Duke Ellington, featured in a Hitchcock film, and was hit by an unexploded bomb during war time, the Palladium’s ornate proscenium arch has probably never hosted over 2,000 metal fans screaming “Jesus is a cunt” several times throughout a performance. The bar staff have probably never sold cans of over-priced (but very tasty) craft ale emblazoned with an image of the Countess Bathory bathing in blood. But it’s important to stretch one’s self, upon occasion.

Which is presumably why Cradle chose . . . wait for it . . . DJ Amazonica for their opening act. Pre-empting some criticism, perhaps, DJ Amazonica – a spry woman in full goth-club regalia – leads with Mayhem’s ‘Freezing Moon’, followed by Manson’s ‘Reflecting God’, then Crüe’s ‘Shout At the Devil’. I guess there is some mixing going on here, in that we don’t get full songs, and one song’s riff will abruptly end for another to begin. She knows her crowd, because this is in many ways a great playlist, but it clearly makes the metalheads a little uneasy. While this uneasiness never really abates, ‘Smells Like Teen Spirit’ into ‘Chop Suey’ is (I admit reluctantly) particularly inspired, as is ‘Roots’ into ‘Last Resort’. DJ Amazonica goes down well in the Slimelight club no doubt, where you expect this sort of thing, but it feels a bit like cheating here. Still, if she was chosen to get people pumped up then it worked a treat.

We also have a clownish compare tonight, who reminds me a little of the late great Sid Haig, better known as Captain Spaulding from the Rob Zombie films. Again, he gets us warmed up amicably, mainly by getting us to shout “cunt” a lot.

When the curtain rises, revealing Cradle’s suitably lavish set, there’s a genuine intake of breath in the crowd. Now we know this is going to be good. While Dani Filth has taken a lot of flak – rightly or wrongly – for re-jigging his band members quite a lot over the years, the five-piece ensemble behind him these days certainly work incredibly well together. The addition of Lindsay Schoolcraft on backing vocals and keys was an excellent decision, combining two key elements of the Cradle sound which previously were performed by separate musicians. All the female voices from the record – including the one-and-only Ingrid Pitt – are perfect (some are piped in), the nuances of the speech all present; and while we all miss Lecter, the Sinister Minister from the early years, she nails all the keys, from baroque piano parts to cinematic orchestral scores with panache. Most importantly, they are all clearly enjoying this a great deal, interacting and jumping around the wide stage.

And what a stage. Three plinths out front: two either side for guitar heroics and Dani’s in the middle, complete with twisted thorn mic-stand, and two fans for the full Dragonforce hair billowing effect. A kind of pyramidal staircase heads through the middle, expanding to walkways each side, with the drummer stage-right and Lindsay stage-left. In the middle of all this are two huge racks of pyros, throwing up plumes of flame or wide burning strips as necessary. Throw in some backdrops, burning braziers and a snowy finale and you have a stage that’s suitably over-the-top, as befits such a theatrical band, and yet actually quite tasteful as far as it goes.

If I give you a blow-by-blow account of the album’s performance we’ll be here all night. But I can provide some highlights. Given that it’s a concept album, Cradle wisely went for a straight play-through in album order; it’s such an excellent album partly because of the sense of narrative that runs through, with one song anticipating the next, and it just wouldn’t work out of synch. ‘Beneath the Howling Stars’ has always been a masterpiece, and I’m still hearing new details to the song some twenty years after first buying it. If the song has lost a little of the rawness of the record, it’s been given a new energy in particular by the combination of guitarists Richard and Marek who raise the song’s intertwining twin-harmony leads to new sonic highs. ‘Venus in Fear’, you know the torturorgasm track, sounds especially unsettling live, with Dani ad-libbing some of the screams live. ‘Twisted Nails of Faith’ is a final stand-out track, complete with a huge pyro show, which brings together everything that is so awesome about Cradle – it’s full of fire, energy, melodrama, and headbanging.

After a short interval, Cradle are back to smash through a standard set which covers Dusk, Damnation and a Day, Nymphetamine, Midian, their most recent album Cryptoriana, and climaxes with an old fan-favourite, ‘From the Cradle to Enslave’. We don’t get ‘Summer’s Dying Fast’ which was on the Bloodstock set-list, but I really can’t complain. I’ve already lost any of the black metal kvlt cred that I previously possessed by enthusing over this show – perhaps just for going in the first place – so I’ll continue in that vein by declaring that I think Dani Filth is one of the best extreme metal vocalists around: ultra-distinctive, versatile, and one of the best song- and lyric-writers. And Cruelty is possibly his finest work, although there are few things in life that top its predecessor Dusk. . . and Her Embrace.

I’ve seen Cradle maybe three or four times, and I’ll admit that they weren’t always amazing – the stage theatrics were gimmicky and distracting, the performance a little perfunctory. But it’s clear from this show as well as from Bloodstock that they’re going through something of an internal renaissance, bouncing back rejuvenated. Even if you missed this special show, now is a very good time to go and see Cradle of Filth.