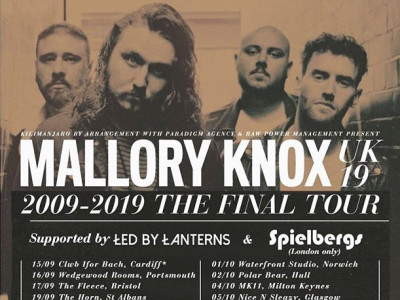 After an incredible ten years on the British alternative rock scene, the news came in September that Mallory Knox had decided to part ways just weeks after the release of their eponymous fourth album. The group announced this stating that they felt as though they had taken the band as far as they could “both professionally and personally”, which has led many to speculate whether the mixed response to the band’s latest album (and their first and only following the departure of frontman Mikey Chapman in 2018) and the reactions of many of their fans to the new line-up, with bassist Sam Douglas taking over lead vocalist duties, has culminated in them deciding to call it a day. The band chose to use their already planned tour in support of the new album as their final tour, which amounted to 23 dates across the UK including one at Camden’s iconic Underworld; which has long been the venue for up-and-coming talent, but on this served as the opportunity for the alt-rockers from Cambridge to bow out in London.

The evening was kicked off by Birmingham’s Led by Lanterns, who are very much cut from the same cloth as Mallory Knox, taking clear inspiration from the indie-based punk-pop which has categorised so much of the alternative scene for the last decade. Not only do Led by Lanterns perfectly suit opening for Mallory Knox in terms of their sound therefore, but they perfectly suit opening a Friday night show in Camden – their showmanship and enthusiasm were utterly infectious from start to finish. They were a great antidote to anyone who may have been feeling a little down by the recently announced news of the band’s split, and the audience who had assembled early responded very warmly to their energetic show and catchy songs. As newcomers onto the scene, there will have been plenty of people who went away at the end of the evening pledging to check them out further, and it will be interesting to see where their career takes them.

The following band, Spielbergs, at first looked to be in danger of spoiling the momentum set out by the opening act as they took much longer to get things going. The three-piece indie rockers from Oslo looked awkward onstage at first and struggled to get into their stride but. fortunately for them, after three or four songs they managed to make things click and put on a thoroughly enjoyable second-half to their performance. Filled with raw dynamism and punky guitar-riffs, they won the crowd over with their stripped-down performance and a musical style harking back to an era that will have been nostalgic for many in the audience. Despite their shaky start, Spielbergs went on to demonstrate why their debut album This is not the End has been so highly rated by the critics. Once the band were able to fully lose themselves in their own performance, they were much the better for it.

The two support acts had certainly done their jobs, and the Underworld was packed and in high anticipation of the last time they would see Mallory Knox. In acknowledgement of that, the band came out to ‘The Final Countdown’, which raised a few smiles; but those smiles soon turned into screams and cheers as the band took the stage and launched into their first song of the evening ‘Sugar’. The crowd did their utmost to show the band as much love as possible, which definitely appeared to spur the band on. Despite still not presumably being used to frontman duties, Douglas prowled the stage with a confident swagger that could have fooled anyone into thinking he had been doing it for years. Lead guitarist James Gillet was just as lively, also contributing backing vocals, whereas rhythm player Joe Savins adopted a more calm and collected approach to proceedings. Almost unseen because of the stage at the Underworld, drummer Dave Rawling nevertheless made his presence felt with a powerful performance from which the rest of the band could build.

The choice of set-list was always going to be an interesting one as the band looked both to promote the new album and also look back on their career as a band. Douglas clearly came into the evening with a bit of a chip on his shoulder, commenting on the negative criticism the band has received on social media since their former vocalist’s departure; and consequently he was clearly keen to promote the newer songs like ‘Black Holes’ and ‘White Lies’ (the latter being set up by Douglas as the best song the band ever wrote). On the one hand, these are the songs that most suited to the band’s new line-up and to Douglas’s voice, and they do play well live; but on the other, it was clear that most fans were there for the old favourites over and above the newer songs. While the band does an admirable job throughout the show, there is just no getting away from the fact that Douglas does not have the range of his predecessor and, furthermore, the removal of one backing vocalist dulls the effect of the harmonies that make so many of Mallory Knox’s biggest songs so special (and arguably gave them their niche within the genre for so long).

Nevertheless, songs like ‘Ghost in the Mirror’ and ‘Beggars’ still pack a punch live, and are spurred on by the crowd singing along to every single word. The band even went back to the very start with Douglas recounting the story of how the band formed before playing ‘Oceans’ from their Pilot EP. Possibly as a reference to Chapman, possibly because it was one of their best-known songs, they end the set with ‘Better off Without You’, which gives the crowd one final change to expend as much energy as possible and scream their appreciation. There was no encore, and indeed Douglas was off stage even before the song finished, with the emotion of the occasion clearly, and understandably, getting the better of him. It is a real shame for a band that had showed such promise and song-writing ability over the past decade to be calling it a day so soon, as they clearly had plenty left in the tank. Mallory Knox approached their final London show with all the professionalism and energy that made them such a force in the alternative scene. It may feel as though it’s over a little too soon, but fans at the Underworld can take some comfort in the fact that they have a few more good memories of the band to leave with.